The Shared Meaning of Community Fitness

Editors note: Katie Rose Hejtmanek, Ph.D. is a cultural anthropologist conducting research on the culture of strength sports in the United States. This is the fourth of an in-depth series introducing readers to her research and preliminary findings.

This is an op-ed; all observations, data, and opinions come from her own research. Read more from Katie Hejtmanek here.

The room was packed. I stood shoulder to shoulder with a woman, about 45, who had “just started doing CrossFit.” She was there to cheer on her husband. “I could never do this but it is so great that they are doing it,” she tells me. A woman walks by and shouts to a boy about ten years old behind me, “Your mom is doing awesome. You’ll be doing cleans like her one day!” I’m asked to scoot over to let the woman carrying the month-old baby and leading the pit bull mix pass under the yellow caution tape into the competition section of the box. For about seven hours one Saturday in October, I observed a masters level functional fitness competition at a local affiliate. However, as much as I observed the competition, my attention was attuned to what I keep hearing as a quintessential aspect of CrossFit’s growth, as a branded functional fitness practice: the community. 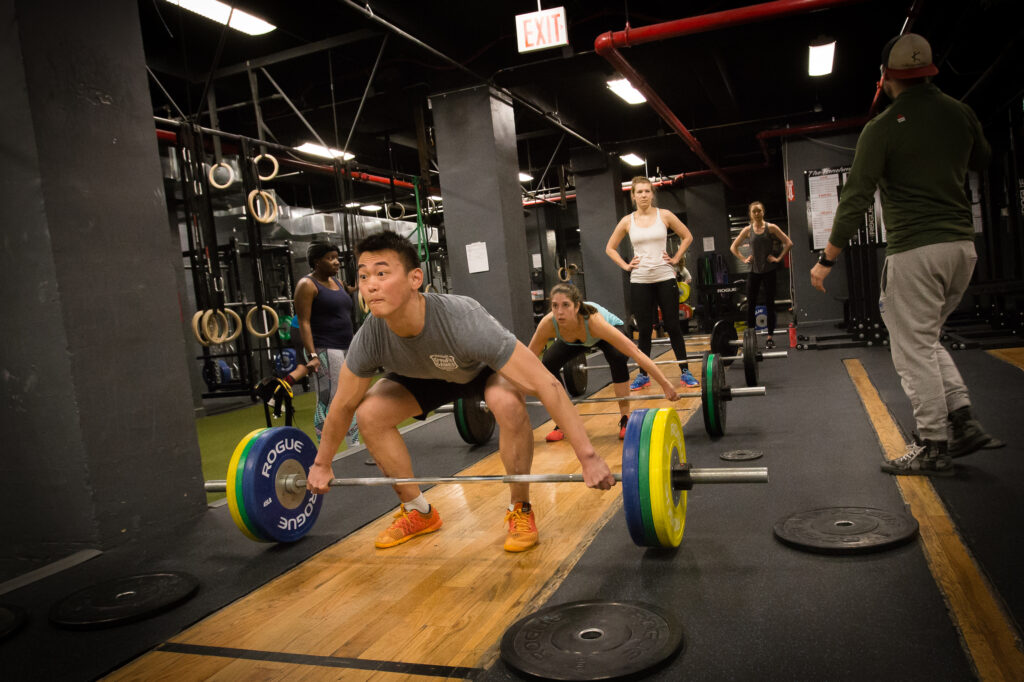 Recently, an undergraduate student in anthropology visited a functional fitness social event and I inquired into her experience – what are your impressions, I asked. “I heard people talk about community, in fact that word came up a lot, like seven or more times, more so than anything else. They are here ‘for the community.’ It’s not what I expected.”

A coach tells me, “This is what I love about CrossFit, it is events like these that sold me. I didn’t get to know anyone or hang out with people when I went to a regular gym. I just put my earphones in. But here, you get to know the amazing people who do CrossFit and you get a community.”

In my first article, Anthropology 101, I explained what anthropologists are interested in studying, “cultural phenomena, the shared meanings, ideas, beliefs, and behaviors shared by a group of people, and taught and learned by members of a group.” In other articles, I discuss how particular aspects of culture work – origin stories, phenomenological experiences of pain or rhythm – to build these shared meanings, beliefs, and experiences amongst a group of people.

In other articles, I have illustrated how a or many “group(s) of people” build something meaning together, connect, and maintain a status quo through their fitness activities, their social media sharing of fitness, or their blog posts. All of these articles focus on how cultural phenomena, shared meanings, of CrossFit® gyms are the glue that holds much of the branded functional fitness practice together, as something more meaningful than just generic functional fitness or a sport. 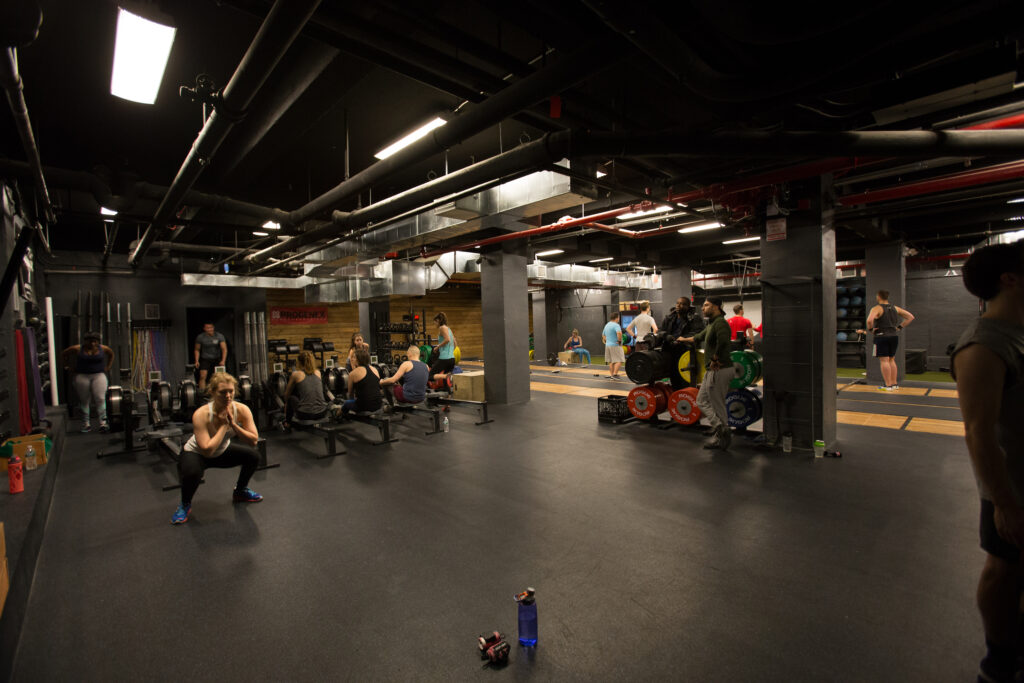 These shared meanings do not just exist “out there” in the world. They aren’t these things that live on without people; rather these shared meanings are continuously created, modified, maintained, and negotiated by the group of people active in the fitness practice. This group of people includes the masters competitors, the family-member-spectators, the new babies and 10-year-olds, and the dogs spending their Saturdays together in the box, the people attending the social event telling an undergraduate student what is so important to them, and the coach sharing his experience.

Since my first few days observing in branded functional fitness affiliate boxes I have been struck by the level by which “community” is mobilized as a shared meaning in the practice. I’m currently working on a definition of community (which is why I seek my readers’ expertise) but here is what I think so far: community 1) is about an in-group of people who highly value the branded functional fitness activity, and in opposition with an out-group including those who workout in other kinds of gyms, and it 2) is the building and maintenance of social networks, connections, relationships, and belonging among those who participate in fitness activities together, go to the same box, or even who know the meaning and language of this functional fitness brand more broadly. The “branded functional fitness community” is local and box specific, and it is global as key elements transcend box or national boundaries.

Going to the Gym

As mentioned above by the branded functional fitness coach, conventional gym-going is a solitary event: you go in, put in your headphones, and get your workout done. This is a somewhat inaccurate portrayal of gyms as many include a variety of group fitness classes complete with a leader, music, and sweaty others. However, when I’ve brought this up in my research, part of the shared story/meaning of this brand of functional fitness as different-than-these-classes is what one person told me: those classes are really about the “instructor and the individual, you don’t really interact with other people in the class.” Fair enough. 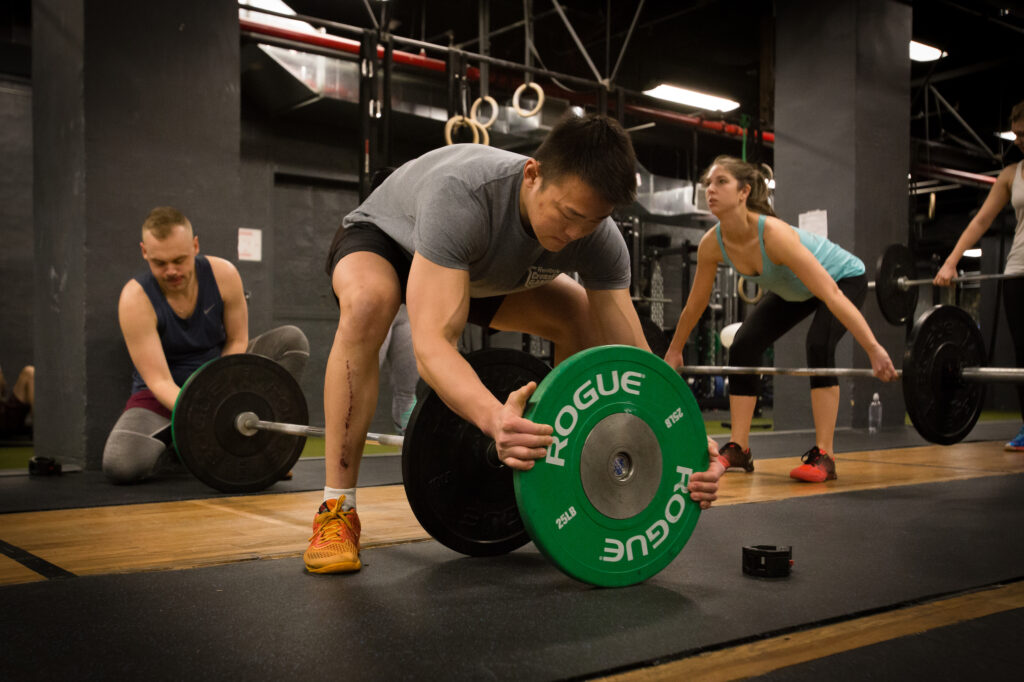 However, I think what is important about this functional fitness practice is that it goes to great effort to distinguish itself from these group fitness classes and other gym practices – putting a boundary around us/them. They (“globo gyms”) have mirrors, group classes without community, and you lift alone with your headphones. We (branded functional fitness) workout together, support one another, and build community around this fitness practice. Those who participate in the latter share the belief/meaning that this fitness method is how one should workout and thus belong to this branded fitness community; those who participate in the former do not. For these people, fitness becomes as much about community as it does about fitness.

In 2015, Harvard divinity school students Angie Thurston and Casper ter Kuile wrote up some of their findings and thoughts on the way Millennials gather outside of religiously affiliated institutions (see Oppenheimer’s New York Times article on the study here). They examined how ten different organizations mirror “many of the functions fulfilled by religious community” (2015:7). The functional fitness practice was one of the 10. They found that its “aim is to forge a broad, general and inclusive fitness, which it defines as increased work capacity across broad time and modal domains. However, what makes CrossFit work is as much the community as the fitness approach” (Thurston and Kuile 2015:10). They include a quotation from a young woman about her box:

[It] is everything to me. I’ve met my boyfriend and some of my very best friends through CrossFit. When my boyfriend and I started apartment hunting this spring, we immediately zeroed in on the neighborhood closest to our box—even though it would increase our commute to work. We did this because we couldn’t bear to leave our community. At our box, we have babies and little kids crawling around everywhere, and it has been an amazing experience to watch those little ones grow up. CrossFit is family, laughter, love, and community. I can’t imagine my life without the people I’ve met through it (from Thurston and Kuile 2015:10).

While I do not find that only Millennials gather at CrossFit affiliates, Thurston and Kuile’s findings do reflect some of my own: that community is foundational to the branded functional fitness practice and that this “fitness community” might be mirroring and taking the place of other, including religious, communities and social networks. This is especially true for affluent, urban, educated, and white individuals (Thurston and Kuile 2015:19) (more on this in subsequent articles).

Whether we examine branded functional fitness as a response to globo gyms or religious institutions, community seems to be a quintessential part of what makes it so important. The shared meaning for those engaged in this branded functional fitness practice is as much about community as it is about Fran times, learning new skills, or increasing one’s overall fitness. It is the community that is sold to beginners as much as increased fitness. In my observations of intro classes in a variety of CrossFit affiliates in the New York City area and across the country, I note the pattern of selling the community of this brand of functional fitness as a quintessential aspect of the fitness process. I write:

“Everyone agrees that community is important, and the initiates can be part of this community; all they need to do is join the box. Five of the seven joined. Roughly seventy percent of the trial class decided to join the box. Apparently, the CrossFit story hit home, and now five more can count themselves among the many who seek functional fitness through community, good people taking care of their health in the right way.”

I don’t think affiliates corner the market on the cultivation of community within the fitness world (neither do Thurston and Kuile). For example, I am a member of a non-branded-functional-fitness gym that organizes movie nights, social events and parties, triathlon and track and field competition teams, and a lecture series. However, community is not part of the selling package, these are events, not community. What’s the difference? There is no shared meaning on offer. In contrast, how this brand of functional fitness sells itself to initiates and is adhered to “religiously” by members is through the promise of community. Providing and believing in the significance of a “fitness community” is a deeply shared meaning within the cultural practice of branded functional fitness, and it is part of how this branded functional fitness practice marks the boundary between those who belong and those who don’t.

How do you define fitness community? Why do you think community is so important to CrossFit? And how does community get built, maintained, and challenged? Post to comments or email me at maxesandprs [at] gmail.com.