5 Reasons Why Everyone Should Compete in Something (Especially Weightlifting)

I believe that there is nothing in life quite like the thrill of competition. It draws a stimulus like no other, and puts you in unexpected situations found only in your wildest dreams. Competition also brings an element of excitement you can’t otherwise replicate. The level of the competition is irrelevant, because no sporting event is the same and no experience identical. And the outcome? It is what you make of it. But first, you have to get out there and compete.

Still not convinced? Keep reading. I’m going to give you my five reasons why you should compete.

1. Competition brings out an emotion you can’t capture anywhere else

The surge of adrenaline, the focus, the camaraderie, the successes and the failures; all of it brings out emotional and physical responses you don’t generally experience everyday. I’ve taken tons of beginners to weightlifting meets over the years, and even though the competition wasn’t nearly as hard as some of the workouts they’d done in the past, they are often sore the next day. They ask why they’re sore, and the answer is simple: adrenaline.

Adrenaline (also known as epinephrine), is an adrenal hormone. Epinephrine causes blood vessels to dilate and allows for them to carry more oxygen and nutrients. Instincts of the Human Body: A Psychological and Skeletal Analysis of Adrenaline on the Human Body explains,  “Blood vessels transported throughout the body deliver more nutrients to skeletal muscles, and vessels leading to the brain induce greater brain function, creating higher levels of alertness and awareness.” In addition, it keeps nutrients in the targeted area longer, allowing for prolonged activity by slowing the return of blood to the heart through a process known as vascular constriction. Adrenaline takes a long time to exit your system, so it’s still there long after you’ve finished competing. The adrenaline causes the blood in your veins to expand and constrict, and over that prolonged period of time, it causes soreness.

When that fight or flight mechanism kicks in and you feel like you could either turn into the hulk himself, or run from him faster than you ever have in your life…nothing beats that feeling.

2. Competing teaches you about yourself

Training can be terribly boring and frustrating at times. Entering a competition gives you something to train for. Competing allows you to set goals for yourself and then gives you a deadline to accomplish those goals. And yes, sometimes you fail. Failing gives you the opportunity to try again. It’s not always about winning medals.

I won’t sit behind this computer screen and lie by telling you that I don’t care about the medals. Of course I do! I want to be the best, but I will tell you that the meets I remember the most — the competitions that I am the most proud of — aren’t the ones where I placed. The competitions I remember the most are the ones where I overcame fear and I learned something about myself.

In 2012, the World University Championships were held in Eilat, Israel. Coach Zygmunt Smalcerz and Coach Kyle Pierce were coaching me, and I missed my last two snatch warms up.  It was too late to move my opener down (in weightlifting, the bar only goes up in weight, so once a weight is loaded on the bar you can’t ask for something lighter). I just tried to block it out and tell myself that we chose that opener for a reason. I made my opener and my second attempt, and I remember coming off the platform and Zygmunt saying “Girl, why didn’t you make it like that before?”

On my third snatch, I attempted what (at the time) would have been the University American Record in the snatch and although I didn’t make that lift, I was proud of myself for keeping calm and believing in my training. When things go wrong (and they will go wrong) you learn a lot about yourself. You can’t replicate that type of environment in training. Training lifts can bring out some good stress, but nothing compared to limiting yourself to those six lifts you take in competition.

3. Competition makes you step out of your comfort zone

The comfort zone can mean different things for different people.

Everyone goes through that self-conscious feeling when they do something new. New weightlifters, for example, dread standing on that platform in a singlet for the first time. As if the silence and lifting solo on a big platform with everyone staring at you isn’t enough, you have to do it while wearing a very form-fitting piece of spandex. Trust me, it grows on you.

My first competition ever was in 2003 at the Christmas Meet hosted every December by the head coach of the 2004 men’s Olympic Weightlifting Team, Coach Gayle Hatch. I was unbelievably nervous, and the only female in the entire competition (don’t talk to me about self conscious). When I say nervous, I mean I literally threw my first snatch attempt off the back of the platform. As I walked back to my coach, he said,  “Ok. Nice speed. Next lift, just hold onto the bar.” I went on to make the next two snatches and my heart rate returned back to its natural state.

Give competition a chance. After a few meets, the singlet isn’t scary. Instead, you feel like you’re putting on your superman cape (or in my case, my Captain America suit.) Overcoming that self-conscious feeling and stepping out of your comfort zone will give you a sense of pride and accomplishment like no other. 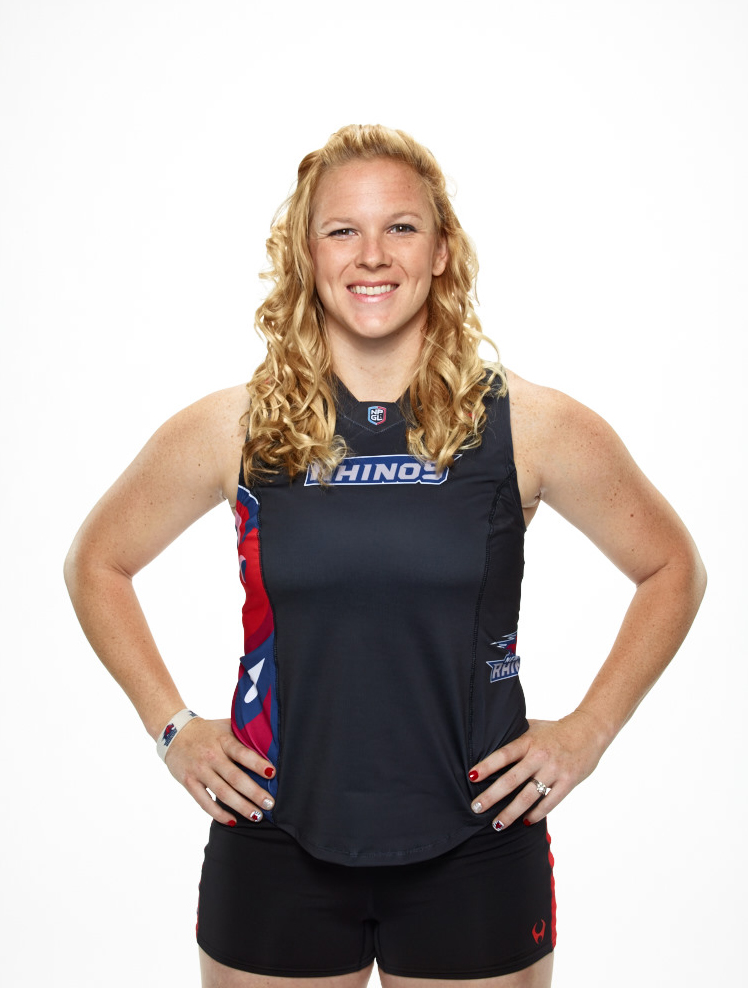 4. Competition gives you experiences you’ll remember for a lifetime

Last year I submitted a “Grid Score” for the second season of the newly formed National Pro Grid League. The online submission itself was not that scary, but when I got invited to the Pro Day in Miami and then especially the Combine in D.C., I was terrified. I just kept thinking “man, what did I get myself into? Just stick to weightlifting, this breathing hard thing isn’t for you.” But then you remember, if you aren’t trying new things, then what are you really living for?

The result? I was totally burned on the weighted pistols. I think I heard “fault” 30 times, and I actually thought it was a decent movement for me. And the 100lbs soft stone? Just don’t ask. I did, however, stay rep for rep with the incredible Becca Day on 175 pound front squats and complete ten unbroken shoulder to overhead with 165lbs fast enough to help the team win that race. I was drafted by the New York Rhinos shortly after. 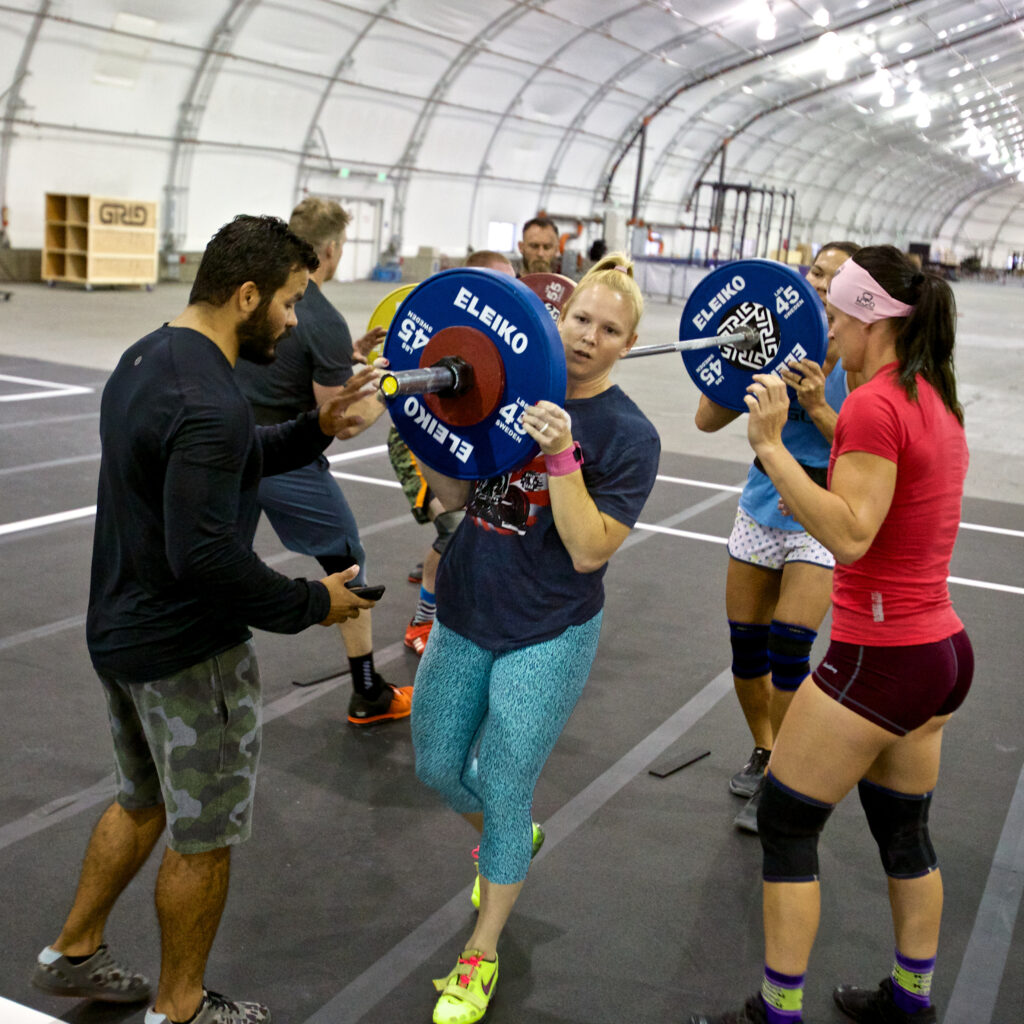 5. Competition helps you relate to other athletes and fellow fitness lovers

Just so you know I practice what I preach, before I started working at CrossFit Innovate in 2013, I entered a team competition with 3 of their coaches called “Rumble by the River.” My prior CrossFit experience included watching from a distance and gawking about how horrifying it looked (by distance I mean Instagram so no one got any ideas about including me). I’m a weightlifter. Anything that lasts longer than a heavy set of three gets me breathing hard, and it’s terrible.

The event started with a 1/2 mile, 4 person raft and then a one mile run (insert pain face). The second event gave the teams 15 minutes to work up to a max clean (Yes! The only event I liked. Ha-ha!). We finished by dividing into 1 man and 1 woman groups and splitting Fran and Elizabeth back to back. Then, the next two team members went and your times were added together. As terrible as it felt, I had a great time, and it gave me an experience I would not have otherwise gained. I did not do a lot of CrossFit, but competing in a CrossFit competition gave me a way to relate to my fitness friends.

So, weightlifters, grab a group of people you know and trust and enter an event together. CrossFitters, go enter a weightlifting competition! There is no individual sport more intimidating, yet more rewarding than weightlifting. Go out there and learn to crave that adrenaline, get more from your training, overcome anxiety, smash your comfort zone, and make friends with fitness. You’re going to train anyways, you may as well give yourself the more rewarding part and compete. There’s just something about standing on that platform, having your coach in your corner and all eyes on you, trusting in your training, and pouring all those working hours into six lifts. That experience leaves you with the type of confidence that will last a lifetime.