Alexandra LaChance on Eating Disorders, Instagram, & the Reality of Recovery

This is a continuation of our interview with 2014 CrossFit Games athlete, American Open competitor, and GRID athlete Alexandra LaChance. You find Part 1 here.

Brooke: Last year, you mentioned suffering from some pretty severe adrenal issues. How is your recovery?

Alex:  I think my adrenal fatigue has been in the works for many years, and then it all came crashing down last year. When you’re a gymnast at the level that I was, you train seven hours a day. The sport has aesthetic demands — you have to be tiny — so I didn’t really eat while I was a gymnast. Then you go to college and your body changes, and you’re obsessed with looking a certain way. Not eating enough, training too much, not spending enough time on recovery…I think all of that added up.

I had an eating disorder for 9 years, and that definitely played a part in it. Last year, training volume was super high. I felt sick all the time, so I didn’t eat, but training volume stayed up. If you’re not eating and you’re training a lot, you have no fuel to recover with. I felt terrible in workouts. My back wasn’t getting any better, and not eating probably played apart in that. 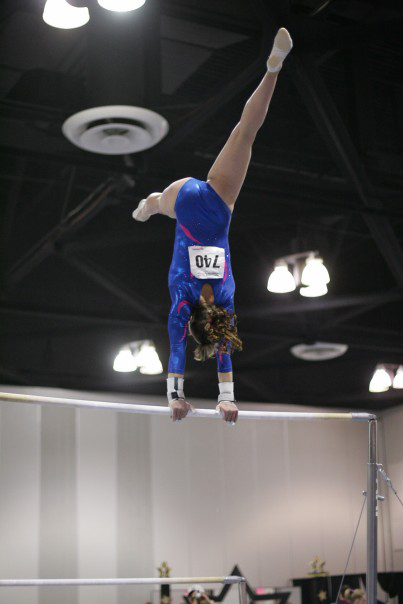 I went to the 2015 Regionals, and I couldn’t even feel nervous at the 3…2….1…go because my hormones were so messed up. The adrenaline that you usually feel at a competition…I couldn’t feel anything. I was completely flat. I couldn’t sleep at night because my body wasn’t producing melatonin. I couldn’t get excited or nervous for anything.

After Regionals, I got tested and my hormone levels were all messed up. I took a couple of months off from training. I could only do very easy things like riding the bike or technique work with the barbell, nothing that got my heart rate going or pushed me.

I think with the combination of gymnastics, the eating disorder, going from the CrossFit Games into a full season of GRID, there was just no time for recovery. I was pushing my body to the maximal effort at all times, and if you’re not taking care of your body, it comes crashing down. It made last year really rough.

Brooke: One of the hardest things for women to get used to when starting CrossFit is accepting the physical changes in our body. We get bigger, and for some, that’s uncomfortable. How did you cope with the mental aspect of transitioning from a gymnastics body to a CrossFit body, especially when recovering from an eating disorder?

Alex: After gymnastics, I suddenly had several free hours every single day, and I didn’t know what to do with myself. I started working out, for no reason, just because that’s all that I knew. I knew I needed a goal, so I got into fitness modeling. That was the first time where my body type was actually accepted. I had some articles in magazines and photoshoots of me working out, and that kind of helped me think, “Oh, maybe I don’t look gross. Maybe I do look okay.”

But at the same time, as a fitness model, my legs were too big. I put on muscle really easily. My quads were muscular. My arms were bigger, and I have really big lats. They told me, “You look really good, but you have to cut out the leg work. You’re not allowed to squat anymore and you’re not allowed to lunge.” And that really sucked, because that was fun for me.

So, I got out of fitness modeling and heard about CrossFit. The girls had big legs and big arms and they can do a lot of cool things with their bodies! That sounded so much more fun than worrying about getting too big. At that point, my leg days consisted of bodyweight lunges…squats and snatching and cleaning sounded so much more fun.

Brooke: Do any of your old insecurities still exist?

Alex: Everyone is really supportive in CrossFit and praises the more muscular look. Over time, hearing enough people say, “What do I have to do to make my legs big like yours?” or “I want my arms to look like yours” helped me accept that look a little bit more.

I get awful comments on Instagram sometimes, like “ew this girl is gross” and obviously that doesn’t feel good to read. I read all of the comments that are written underneath my pictures, even though I know shouldn’t. It’s still tough to brush it off.

I think if you’ve had an eating disorder you’re never completely happy with how you look, and you’ll never really see your body how everyone else sees it. I’m aware of that now. Before I never knew there was a difference. I thought the way I saw myself was how I was.

Now I know that’s not the case, but it still doesn’t change how I always see myself. With CrossFit, there’s enough support, and there’s a lot of people supporting the muscular build and putting the performance over the aesthetics. Hearing all of that helps. 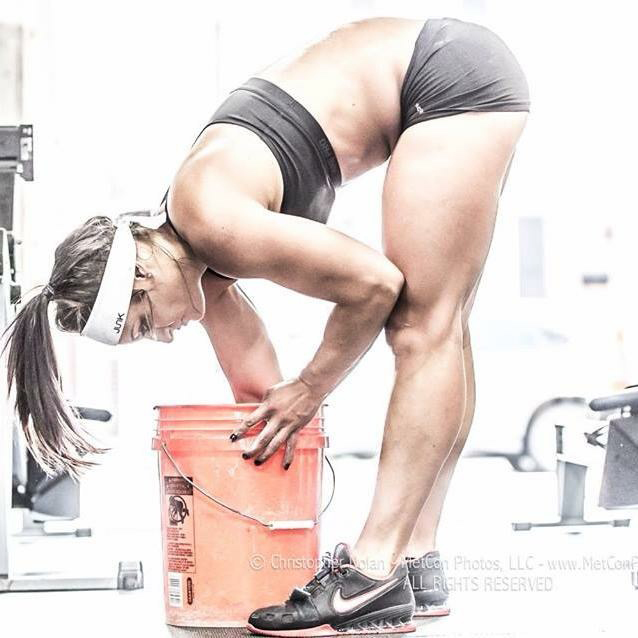 Brooke: Do you feel pressure to be both strong and lean among all these amazing female bodies?

Alex: When I’m leaner, my body performs better, so it’s incentive for me to try to eat clean and maintain a leaner body. It just doesn’t feel good to train, to do gymnastics, otherwise. Your joints hurt a little bit more, you feel heavier when you work out, so that helps me incentive wise.

But yeah, if I’m going through a heavier period and I have videos up there [on social media], I’m going to get comments that comment on my body being bigger, or it looking gross. You’re never going to have the perfect body for all of social media, but if you’re training to be at a high level and you’re eating to support that training, you’re going to lean out naturally.

I think that’s why it’s kind of expected now, because all of the girls look like that. A six pack is just the norm. It comes with training and nutrition, but people don’t understand that it’s not easy to all of a sudden have abs just because you CrossFit. 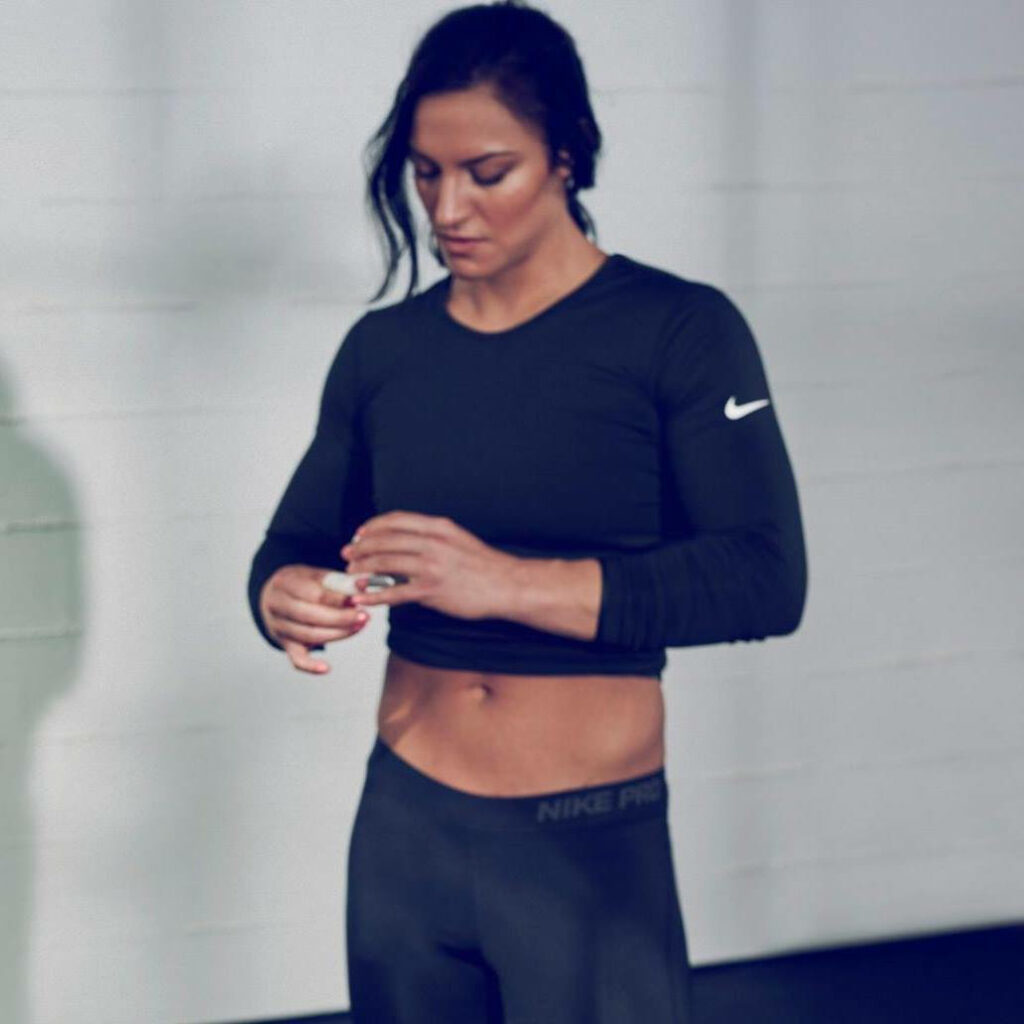 Brooke: Has dealing with the critical comments gotten easier over time?

Alex: It’s harder now. In the beginning, everyone who followed me on social media followed me because they genuinely supported me. But as you gain popularity, you also get a lot of followers who don’t support you, and who just follow you to be a jerk. The more followers you have the more you have to deal with that.

It’s just a matter of remembering that it doesn’t matter. My boyfriend tells me that all the time, but easier said than done, especially when I’m still fighting with those thoughts myself. To hear other people say it, it’s not easy.

Brooke: What would you like to see changed in the fitness community?

Alex: I love the direction that CrossFit is going, but I wish the people just starting or the people doing classes would understand the need for laying the foundation — learning proper technique, building the strength to support weight overhead, not just thinking they can throw weight on a bar and move it around or bounce off their head during handstand push-ups.

People don’t understand how much accessory work and technique work — strict pull ups, ring dips, tempo work — athletes actually do in order to throw weight around our rep out high rep gymnastics movements. I work on gymnastics drills all the time. I do snatch drills all the time. If that could be more popular, CrossFit might not have a bad name because people flailing around where everyone’s just getting hurt left and right.

We can clean up that misconception if people spend more time making sure the movements are sound, instead of just going for the sexy big numbers and reps. So much injury could be prevented if people understood the need to perfect technique before adding weight. 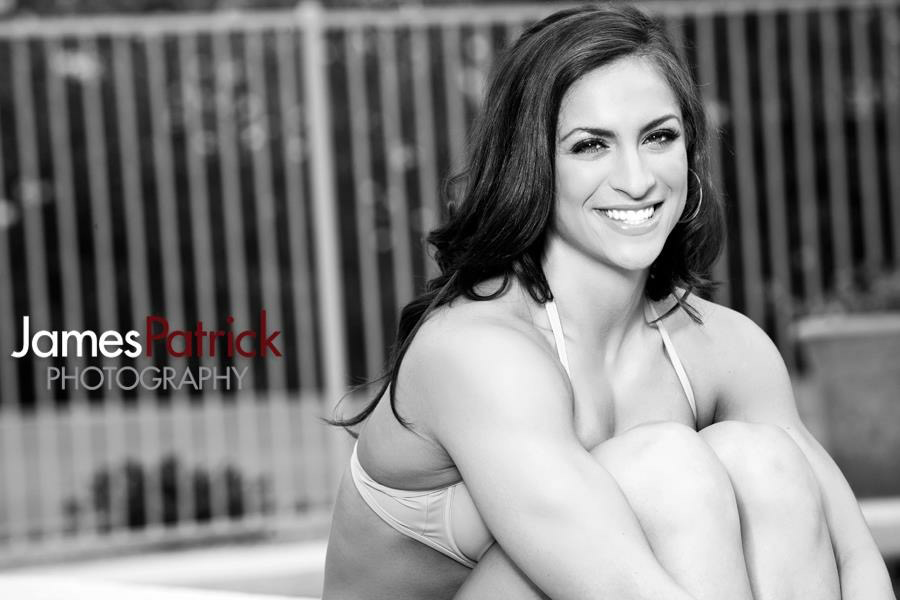 Brooke: Any tips for coaches who are trying to figure out how to satisfy paying clients while getting them to understand the need for basics?

Alex: It’s hard for members to believe it unless they see it. You can say what you want to people, but some people are just stubborn. If there’s opportunity for them to attend seminars with high level athletes, getting to hear how important it is it first hand from those athletes helps.

Brooke: Let’s talk about GRID! You were recently just picked up by the D.C. Brawlers. How did that come about?

Alex: I’m really excited to be with the Brawlers. My boyfriend coaches Becca Day, so I’ve had the privilege of getting to know her. She talked to Justin Cotler and brought my name up. They needed another utility player, so it happened like that.

My goal the whole time was to be on the Brawlers. They’re the best team, they have the best athletes, and the best coach. I always thought it would be amazing to be on his team. I’m super pumped, and thankful to Becca for putting the wheels in motion. I’m excited to be around athletes of that caliber, they’re incredible athletes in every single way.

Brooke: GRID has so many high skill movements we don’t see everyday. What high level gymnastics movements would you like to see incorporated into GRID?

I think a balance beam would be really cool. It would be hard under fatigue and with speed.

They capture a lot of exciting things in that GRID, for how small it is. It’s one thing I really love about GRID— there’s so much high skill, so it’s not about brute strength and flailing around. There’s a ton of skill that goes into doing a back uprise or a toe to bar, chest to bar, muscle up combination.

Brooke: It’s crazy to me to see athletes from different backgrounds, who have never done some of these super technical movements, just master them in a few tries.

Alex: It blows my mind that you’ll see ex-football players doing freestanding handstand push-ups, or straight armed muscle ups. People have to learn it, so they find a way and learn it. It’s insane that adults can just learn movements that require so much body awareness or coordination. They’re not seven years old learning it for the first time on a seven year old body!