Kilo for Kilo: Weightlifters Are Some of the Strongest Athletes On Planet

There’s no denying that body type can play a monumental part in one’s success in strength sports. No matter the strength sport, there will always be a body type that responds better to certain activities, and this logic reigns especially true in the sport of weightlifting.

This isn’t to say that elite weightlifters are limited to certain anthropometrics, genetics, and dimensions, but there are a few truths between the world’s best and how they’re designed.

A few days ago, the Olympic YouTube channel published a video titled, “Anatomy Of A Weightlifter: What Are Dmytro Chumak’s Biggest Strengths?”. It was a really interesting video that covers one of Ukraine’s best weightlifters through a variety of tests and assessments. It reminds us a lot of the 3D Weightlifting Technology video we wrote on last year from the Olympic YouTube channel.

The first test they take Chumak through is a Bod Pod. This is one of the most accurate ways to assess body fat and lean muscle mass. In the video, when the researcher informs Chumak that he’s sitting at a very lean 9.5% body fat, he simply responds with, “Yes, not bad, I’m very happy.”

To assess relative strength, the researchers used a Dynamometer grip test. In many research settings, scientists utilize a grip test to safely assess maximal strength, and we’ve actually written on this topic before.

Upon completion of the test, Chumak is told that his combined force production is 134kg, which is one the best scores he can produce for all sports, his weight, and maximal physical capabilities. 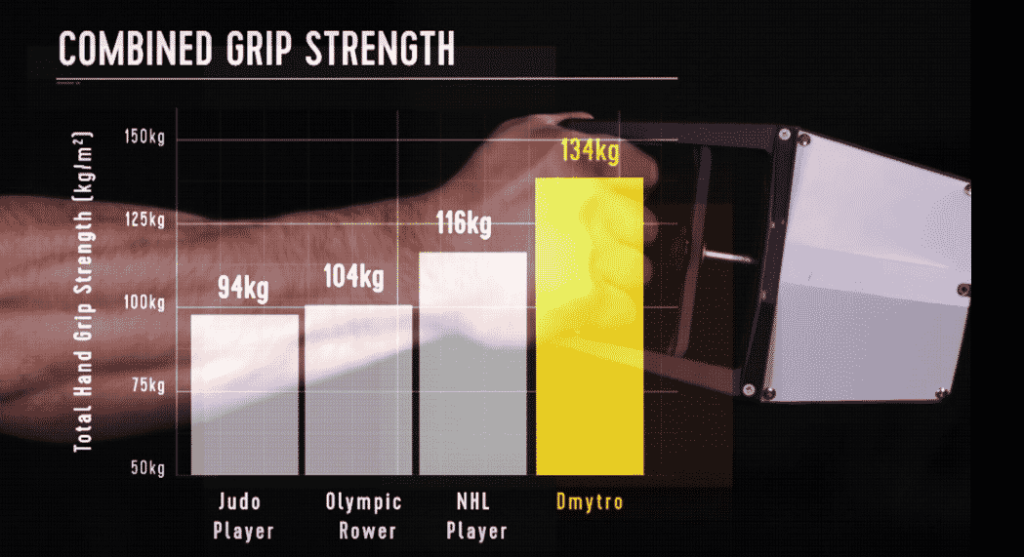 The next tests, and possibly the most relevant for other weightlifters reading this now were the Isometric Thigh Pull Test, Isokinetic Dynamometer Test, and the Wingate Test. These tests are all designed to assess Chumak’s peak force production and anaerobic capabilities.

How did he perform compared to other weightlifters and top level athletes? Check the whole video out for his results!