I am bulking and it feels dangerous.

This is my second Strongman (NAS) Nationals prep, but this time I feel like a competitor. I have 11 competitions behind me and 2016 Nationals will be my 7th competition this year. I have put a lot of mileage on my wheels in order to feel seasoned by the time I got to my next big competition – mission accomplished.

My preparation for Nationals this time around started with writing a huge list of every area of training that I needed to be paying attention to and tracking and refining. I think about training constantly, but having a visual list seemed like the no-brainer I had been missing before. I felt confident about giving renewed attention to things like cardio and stability and core work, as well as stretching and mobility. But there is one area that I have never felt incredibly confident about: nutrition.

I have practiced intentionally eating well (that’s how I’ll describe choosing to cook vegetables, I guess) for several years, after leaving behind my former diet of bar food and too many cigarettes, and I know that nutrition is crucially important, whether your goals involve body composition or performance. Well, I thought I knew. Truthfully, I never paid a ton of attention to when I was eating, or exactly how much. I was not especially vigilant about getting intra-workout sustenance, or immediate recovery fuel. I am obsessive about my training goals and ambitions, so why was there a giant gaping hole in my Get More Badass Plan? 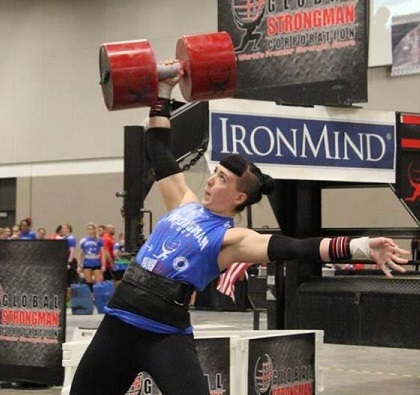 There’s this thing many women do. Let’s call it perma-dieting. It’s where you have so internalized the idea that you need to be thin that you don’t even intentionally “diet,” you just don’t eat enough, ever. You let yourself indulge from time to time of course, but you feel bad about it, usually. Why? Because most women are TERRIFIED of gaining weight.

To simplify some very complex issues, women start learning at a very young age that thinness is the most important quality a woman can possess. These pressures manifest constantly – friends, family, society, advertising. It is everywhere and it has a lot to do with our ideas of how women are “supposed” to behave.

I do not think people in the strength community often realize that when a woman says to her non-lifter female friend that she is trying to gain weight, she might as well have said she is trying to grow a tail. But a tail would be more acceptable. 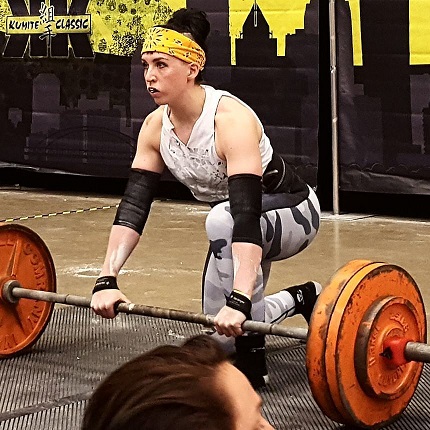 So I was perma-dieting. I wasn’t consciously restricting calories, I just wasn’t eating like the athlete I want to be. I had convinced myself that somehow, I instinctively “knew” that I was eating the right amount, because I felt relatively satisfied after meals and my stomach wasn’t growling at bedtime. Good enough, right? Not really.

This July, I competed twice, two weeks apart. This means I had maintenance workouts to fill the weeks between competitions. I ate what I normally ate, probably less. The week before my first competition, I cut carbohydrates to drop a little water weight so I could weigh in at under 165lbs. That came right off, and so did a little extra. I weighed in at 158 lbs, and two weeks later I was still sitting around 160-162 lbs, which is light for me. At both competitions, I felt like I underperformed. I still did well on many events, but I couldn’t understand why I struggled to get 300 lb x 5 on a conventional AMRAP deadlift.

In retrospect, the answer is obvious: I was under-eating. I was averaging probably 2000-2300 kcals a day, which is just not enough for someone trying to get really, really strong. I should have been averaging 2500-2600 kcals or more, but I wasn’t paying attention to how my diet was affecting my goals. It was just a blind spot.

Of course, I liked that I was looking shredded. I liked that I could see my abs. It makes me feel good and helps my business (personal trainer and actor) to look strong, athletic and powerful. But looking ripped doesn’t win Strongman competitions.

So what was the wake up call? I was reading the recent Reddit AMA with strength coach Dan John. In response to a question about bulking and cutting, he said, “The old timers really believed in bulk and cutting. …One thing about the younger group of lifters…they fear losing their abs, so they never really push the big weights and eat a ton. They lose the ability to load enough to get to the next level.”

That sentence kicked the door down on my denial. I had been spinning my wheels on my strength, and while lots of my technique was getting better, I felt like I had no power during training – everything wiped me out and I was stalling. I just had not made the connection to my nutrition, and Dan John’s words felt like a bomb ripping through the bullshit I had been telling myself. 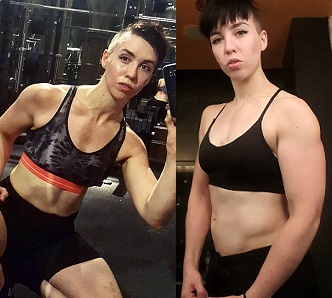 Eating Around Your Feelings

I had a series of realizations over the course of the first few weeks of trying to gain. The first was that I had not realized how much I had been depriving myself. The first 2 weeks I put away about 3,000kcals a day, and it was like my metabolism had been asleep and was now revving to life. I got hungrier and was waking up leaner. I marveled at the ability to put away two donuts and a pint of Ben and Jerry’s before bed and wake up ripped. It was a trip.

The second was the perma-dieting. I had no idea how deeply I had swallowed the “Thinner is Better” pill. The constant fear of being fat is reality for many, many women. When your feelings about your weight have less to do with your athletic goals and more to do with self-worth, it is really easy to fall into unproductive or even unhealthy habits out of fear. Hence women chronically undereating, or crash dieting then binging their way back to their old weight, rather than dieting and exercising in a way that actually works sustainably and makes sense for their goals. 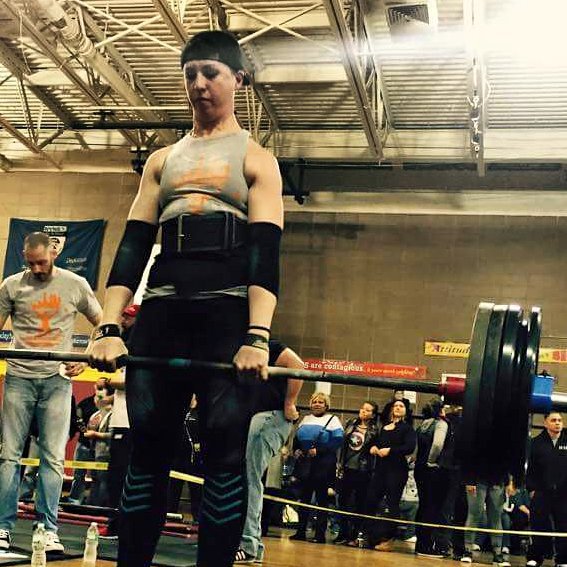 I didn’t realize how pernicious and deeply entrenched this fear was in me until I started to try and gain weight. For the first few weeks, every night as I was reaching my calorie cap, I would think things like, “Do I really need to? What if I over do it? What if my boyfriend thinks this is gross, but doesn’t want to say anything? What if he stops finding me attractive?” As if I could accidentally put on thirty pounds over the weekend. As if being a little thicker was going to make my boyfriend dump me. As if this was a dangerous thing I was doing.

I am trying to get strong enough to throw hundreds of pounds up in the air, to rip them off the ground, to carry them as far as I can, and all my anxiety could latch onto was if eating the calories I needed to perform at my best would make me “gross and fat.”

I work, sleep, and live to train. But I was shooting myself in the foot by falling prey to a horrible narrative that I did not realize I was caught in. And I wonder how many women (or men) are subconsciously sabotaging their performance goals because they can’t get themselves to eat enough/correctly, because of underlying ideas about what their bodies “should” look like, ideas that they may be emotionally latched onto without realizing.

I Bulk, Therefore I Am

Now I’m over five weeks in, and guess what? By my standards, I still look great. In fact, I look awesome. My upper body is FINALLY growing. I’ve been hitting PRs left and right. At the start of this training cycle, I was feeling nervous about the weights for Nationals: I’m not nervous anymore. I am kicking myself a little, because if I had been more on top of my eating, I probably would be a little stronger. But I’m doing great NOW, and I know what I’m doing right. And what I was doing wrong. In starting to bulk, I became aware of how my deeply ingrained fears about being fat and gaining weight were affecting me, and I can actually start to make progress again.

Why is this important to athletes, amateur or otherwise? It’s important because if you are like me, and your strength sport gives you a ton of life and a sense of accomplishment and joy, then you want the most out of your training. And you cannot get the most out of your training when you are not taking care of yourself. Taking care of yourself means sleeping, eating, and training. It also means doing the internal investigation to see why and how you are doing what you are doing.

There is a lot to be said about self-care and recovery, but I will leave it at this: whether you agree with me about the unique pressures women face with regard to weight-loss and gain, eating is a far more emotionally complex activity than we often let ourselves admit. It is only by becoming conscious of this that we can evaluate if we are sabotaging ourselves or if something needs to change. Of course, if you have a nutritionist or coach (or a therapist!) to run this by, that’s a great start. My coach Chad does not manage my nutrition, but I’m getting better at keeping him in the loop (if you lie or obfuscate to your coach, they can’t help you much).

I’m trying to stay very honest about this process. I am fairly vain and will still pull an “ab check” if I like the lighting. But I am trying to not care as much, because I care about getting stronger more. And I realized that for me right now, choosing to put on weight to see how strong and muscular I can get, is another way of affirming a positive relationship with myself, on my own terms. I feel confident now that the next time I try to lean down, I will have a healthier, more mindful methodology.

Whatever we choose to do with our bodies is a reflection of how we feel about ourselves; I really believe that. And I want my body to reflect the care and effort I put toward manifesting its ultimate capabilities.