Dani Speegle shares her 2019 Games takeaways and her strategies for tackling the 2019-2020 season.

Dani Speegle enjoyed quite a meteoric rise to the top of the CrossFit leaderboard in the 2018-19 season. After back-to-back top 10 finishes at Regionals in 2017 and 2018, the 26-year-old finished fifth in the worldwide Open and claimed the national championship for the United States – a significant improvement from 2017 and 2016, when she globally ranked 80th and 216th, respectively.

After ending her highly-anticipated Games debut with a personally disappointing finish (27th initially, now 26th after the disqualification of Anna Fragkao), Speegle set her sights on a rigorous training routine for the 2020 season. In a post on her Instagram account, she wrote:

“Of course this isn’t the finish I wanted. I will use every emotion I’ve been feeling for the past several days to fuel my fire for this upcoming year. I will destroy my weaknesses. I will take no shortcuts. I will make no excuses.”

Determined to make a true impact in her second Games appearance, Dani Speegle caught up with BarBend to discuss her takeaways from her rookie performance and her training focuses for the 2020 season.

While her rookie debut may not have produced the results Speegle aimed for, it did reveal several areas in her training routine that required more focus heading into this season. Like many athletes, the heavy volume of running in the 2019 Games hit a major area of weakness for Speegle, and one that she is working to correct for 2020.

Speegle told us, “I didn’t grow up playing a running sport. The most running I ever did in my childhood was springing to the vault! I’m playing catch up with a lot of athletes, trying to get my body used to running in high volumes.”

“Going into [the 2019 Games], running terrified me,” she admitted. “Anything more than a mile was just not something that I was ready to tackle, especially a weighted run. In Dubai, I got to a point where a short weighted run was just damage control. So getting to the Games’ Ruck workout, I said this wasn’t damage control. I was telling myself I wasn’t sure if I was going to survive this! I thought my ankles were going to flare up, and they did. But it was a big accomplishment for me. Placement-wise [39th], that run wasn’t good for me at all, but looking back, I think it was pretty amazing that I did that.”

Speegle considers her Mary performance in 2019 to be an indicator of another area to hone in on while training for 2020.

And just like that – the season is complete. Time to enjoy some time off (not a lot), indulge, sleep A LOT, eat A LOT, rest, recover. It’s weird to think that my season will end not after the CrossFit Games, but after the following Open each year. The turnaround is so quick after the games that I decided that I would take a break once the open was over. The goal with the new structure is to qualify through the open, so the rest of the season is relatively stress free – which is why i held off taking a break. ⠀⠀⠀⠀⠀⠀⠀⠀⠀ It has been a LONG year – an AMAZING year, but a long one. A little over a year ago I started really buckling down my training to get ready for the first ever sanctioned event – the @dxbfitnesschamp – after that I competed in 5 other events, and completed 9 qualifiers. I loved every second of it but I NEED some down time. I’ll take a week off (mostly to eat like….everything), and then it’ll be back at it💁🏼‍♀️ First up? Back to Dubai but this time I’ll be going team with literally some of my favorite people on this earth 💕 @jessicargriffith @alecsmith8 @cmooneycf 🤩🤩💕 ⠀⠀⠀⠀⠀⠀⠀⠀⠀ LET’S GET IT…..in a week😂😂😂😂 #2020szn #girlswhoeat #cakesquad 📸👉🏼 @furyphotography #bornprimitiveathlete @bornprimitive

“Longer AMRAPS – around 20 minutes or so – where the reps are actually short are really bad workouts for me,” she said. “My fitness is there, but I struggle with the short transitions between reps, when the workout is just go-go-go.”

“In the Cindy-style Open workout, I knew I wasn’t going to get my best time, or anywhere near the best time. But I’m working on it, and it’s a workout style I’m trying to improve on. You have to find the silver lining somewhere.”

In addition to the above targeted training, Speegle bases lots of her day-to-day routines off of the WODs posted on CrossFit.com. Her workouts will then incorporate more longer, outdoor workouts and heavy barbell work as the Games season approaches.

“My goal is to actually make an impact this season,” Speegle said. “I want to get on that podium in 2020, and I’ll do anything to get that going.”

Finishing this year’s Open in 18th place (5th in the United States), Speegle secured her invitation for the 2020 Reebok Crossfit Games. She’s looking stronger and more determined than ever, especially coming off a second-place team finish in Dubai with her We Got Cake teammates Jessica Griffith, Cody Mooney and Alec Smith.

We can see that her updated training routine is already making a positive impact on her performance, and we look forward to seeing it full-force in her second Games appearance. 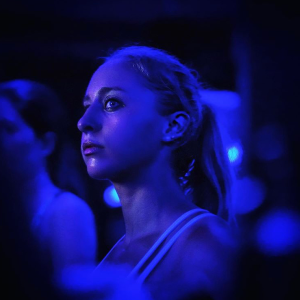 Kaitlin McCabe is a freelance contributor to BarBend with work featured on websites including Sports Illustrated and Bleacher Report. When she isn’t dropping into New York’s top fitness studios and CrossFit boxes, she teaches English – Special Education in the Bronx.