A little over a week ago, I was scrolling through the CrossFit subreddit and stumbled across an amazing story. It was about a newer CrossFit athlete (started in September 2017) named Jillian Bleck overcoming a lifelong paralysis termed Erb’s Palsy and tackling the CrossFit Open for the first time. Bleck’s right arm sits around two inches shorter than her left and her shoulder internally rotates, which makes it nearly impossible to raise her arm under her own power past chest level.

In the Reddit post, Jillian’s husband Aaron Bleck wrote about her hesitance to dive into the string of five Open workouts, and was eventually convinced by CrossFit Coach Jake Pickering at Best DAM CrossFit in Boulder City, Nevada. Aaron’s story about Jillian was not only inspiring, but a nice reminder of how strength sports continue to improve lives.

I wanted to know more about Aaron and Jillian’s CrossFit careers, so I reached out with questions. Some of the answers below have been clipped for brevity. 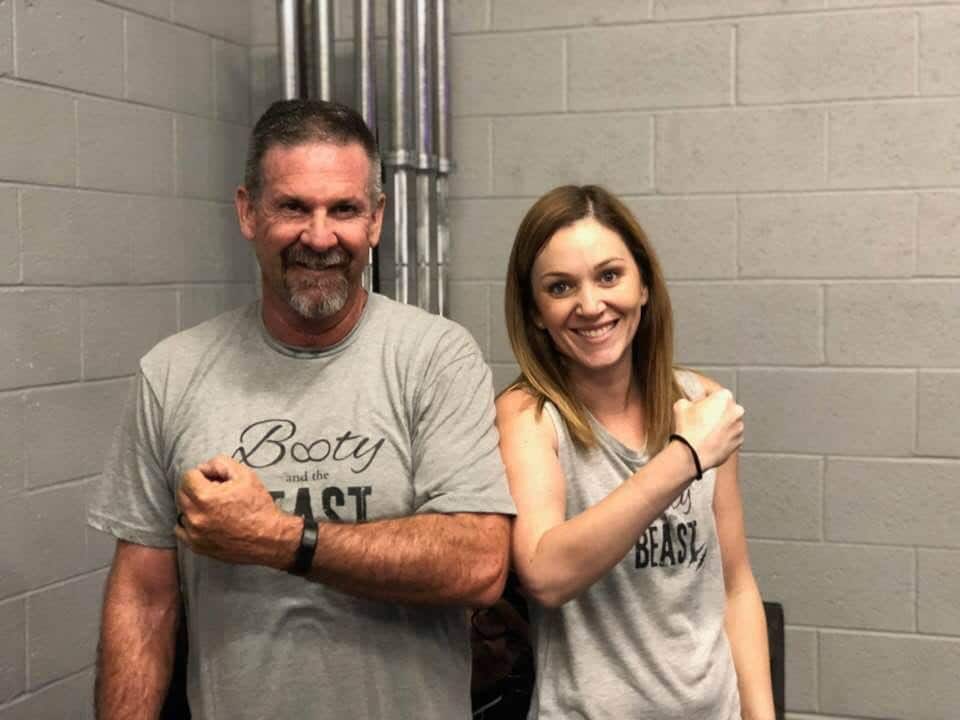 Image courtesy Jillian Bleck featuring her and her father.

BarBend: What’s been the toughest struggle dealing with Erb’s Palsy in life & CrossFit? Was there a form of exercise you did before taking up CrossFit? Or was CrossFit your first organized form of fitness?

Jillian: As a kid I never really knew much about Erb’s Palsy except that I couldn’t lift my arm up. But when you are a kid I don’t think you see your limitations like you do as an adult. I think the biggest struggle has been realizing it’s an actual “disability”. I really hate that word, but I’m getting used to it. When I was growing up I was in dance until I was about 12 when I started to realize I was never going to go any further because without being able to get my arm over head for moves I had already gone as far as I could with it.

After I was done with dance I went through a very short-lived phase where I wanted to try out for the swim team. I practiced the breast stroke in my pool for a week and had my mom time me and I really thought I was doing good. I remember the day of tryouts; I wasn’t even halfway across the pool before everyone had already finished. It was pretty embarrassing, but all the other kids cheered me on so it could have been worse. As an adult, I look back at my mom who always supported me in all the things I wanted to try and realized it must have been hard for her to know I would fail, but to still be there and encourage me when I wanted to try out for something ridiculous like cheerleading. She’s been my biggest supporter all my life (along with Aaron).

As for struggling in CrossFit, I have been very fortunate to have an amazing coach who along with other members are constantly finding ways to help me modify movements. My biggest disappointment has been being told I can’t technically compete in the Open because it took A LOT to even convince myself I should try. I understand it’s hard to verify disabilities in such a huge competition, but I hope that in the future they allow athletes to submit their modifications for approval so we can compete too.

BarBend: Stemming from your last point, is there anything specifically you’d like to see CrossFit implement more of for adaptive/disabled CrossFit athletes?

Jillian: Personally, I don’t see it changing unless more adaptive/disabled people show the interest in competing. I was pretty adamant about never wanting to compete because I get really frustrated trying to explain to others that it’s not that I don’t FEEL like I can do something it’s that I physically can’t do it and never will be able to. The fact that the Open is done at our personal gyms actually changed my mind because I knew I’d have judges and other people who already knew about my shoulder and I could relax about having to explain.

I was pretty upset and frustrated when the scaled version ended up being just as unattainable as the RX version. I actually met another woman who goes to another gym in my area when we posted my first (banded) pull-up, who also has Erb’s Palsy! Unfortunately, mine is a bit more extreme than most, but it has been so awesome having someone who knows what I’m going through. She had reached out to me last night after 18.1 to tell me she was in tears for 20 minutes doing her clean and jerks because it felt like her shoulder blade was ripping each rep and she felt so disappointed. I sent her the link to Aaron’s Reddit post and told her all the comments people were making about me were just as much for her.

It would be awesome if someone from the Open could see our dedication and realize that some of these modifications we do are actually harder than the RX version because of our disabilities rather than thinking we have an advantage. I wouldn’t even mind sending in a list of modifications that would work for my specific case and explains why some of the scaled workouts won’t.

BarBend: Aaron, what was your initial pull to start CrossFit? How long after did you realize you wanted your wife to start?

Aaron: I work for the fire department and physical fitness is really important to me. I grew up swimming competitively my whole life even going to a D1 school and competing in college. I was used to having a coach tell me what to do. I had the hardest time going to the gym and making my own workouts where I felt I was actually pushing myself. CrossFit always made sense but having 2 kids and an irregular work schedule made it hard to find time to go. The closest gym was about 30 minutes away and it wasn’t practical to drive that far and workout with our schedule. Then Jake and Terra Pickering opened Best Dam Crossfit in Boulder City, NV where I live.

I started going and loved it from the first day. My wife has never been the athletic type and had always had issues because of her shoulder. I had tried talking her into going because I thought if she was able to strengthen other muscles it would help for things she had to compensate for like picking up our kids and carrying them around. She never thought it was a good idea because she was always told she wouldn’t be able to do a lot of things.

Great Saturday partner WOD!!! Everyone have a great weekend!

Finally, in September of 2017 I was doing the 9/11 tribute workout and she came to watch. My coach, Jake, was talking with her asking why she didn’t come to the gym and found out about her shoulder. He made it his mission to find out everything he could and find movements for her. He sent us links and videos and we finally talked her into doing a 2 week trial period where he would work with her one-on-one after classes were done so she wouldn’t feel self-conscious. She was not happy I talked her into it and told me the first day it wasn’t going to work and I didn’t understand her limitations. Seeing how much time Jake put into working with her limitations, and checking to make sure she was comfortable with the movements changed her mind by the end of the workout.

Aaron: The family our gym created is what keeps me motivated, even after a bad workout they pick you up and tell you that you did great. Everyone cares about each other and pushes each other. I love challenges and making myself better, CrossFit is a perfect way to do it.

Jillian: For me personally, it’s seeing the results. I think I might be the first wife who has started working out with their husband and toned up faster than him (laughs). And like I said before, it’s nice that it’s also a social gathering and we get to hang out and joke around with our friends.

BarBend: How has CrossFit changed both of your lives?

Jillian: Honestly, besides the fitness part, it has really helped our social lives (laughs). It gives us a place we can go to be with other adults that have a common interest. As parents of young children, sometimes it can be hard to get out. Aaron actually built a play area for all the kids at the gym and I think it has really encouraged other parents (specifically moms) to come more knowing they don’t have to go through the hassle of getting a sitter just to go to the gym.

Aaron: I feel a lot fitter. I’m paid to take care of people and be able to respond to many different types of emergencies, it’s my responsibility to be in good enough shape to perform in any of them. I have made a lot more friends from people I may have never even started talking to. I’ve gotten my dad to sign up (he’s 57), he’s lost weight and recently competed in a local competition and placed 2nd. The last to get signed up was my mom (she’s 56) and she’s enjoying it too. I want my family to be healthy and live forever so this was a step in the right direction!

Jillian: We actually fill out a goals sheet for our gym at the beginning of the year and Aaron laughed when I told him one of my goals was to be able to climb a fence without a boost! We also just installed a rope so I have made climbing it a goal too. I would also like to run a mile without having to stop (laughs). After I did my banded pull-up I thought about making a strict pull-up a goal, but that may be an unattainable goal. If it happens I’m sure Aaron will let Reddit know!