BarBend Reads Your Meanest YouTube Comments – Who Got It Worse?

With about 8 million views on our videos, we've received a good amount of traumatizing comments.

Jake Boly and I have made hundreds of videos because, well, we just want fitness and nutrition content to be better. We want a happier, healthier world. We ventured into cyberspace with our hearts, minds, and eyes wide open, just wanting to do some good, you know?

So, of course we deserved to receive the hundreds of needlessly cruel comments that have been directed at us in the comments of all of our YouTube videos. Here, we’re each reading five of our favorites, and we want you to vote in the video comments as to who got the worst comments: Jake or Nick? Can’t decide? Leave us a mean comment of your own! We’re already dead inside.

Nick: “This is a real original one.”

Nick: “This is your ‘mean comment’? That’s a compliment! You’re humble bragging, Jake! That’s a nice comment. This is like if you complained about someone saying you were too handsome for the video. You’re not that great at this.”

Nick: “You know dressage? When you train the horse to do a little dance? I’m very good at that, it’s an Olympic sport. It’s really good for the calves. Of the horse.”

Jake: “He legit doesn’t know sports. Legit does not.”

Nick: “Which video was this?”

Jake: “This was Bench Press vs. Push-up. In which I discussed the differences between the two, as obviously, they are different movements. But a moron should know that.”

Jake: “‘OP is right.’ They had a full battle back and forth debating your physique.”

Nick: “Yeah, the guy who defended me got smoked. He got taken out from two different angles, there.”

Jake: “That’s why my legs are small.”

Nick: “For number 2, I cheated a little bit. I put a few comments with the same theme into this entry.” 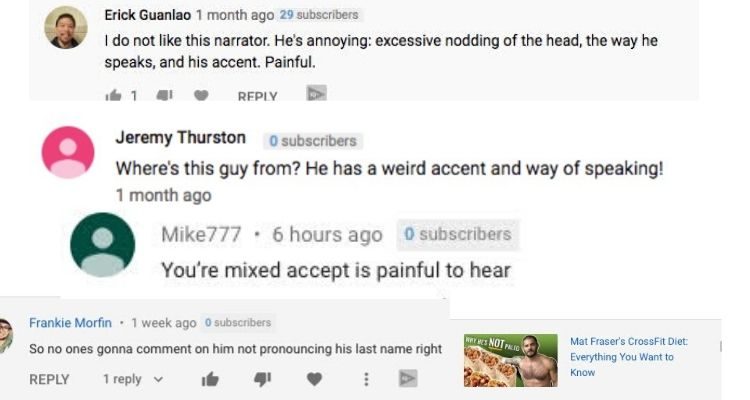 Nick: “‘Frasah.’ Mat ‘Frasah.’ That’s how I’d pronounce Mat Fraser’s given I’m Australian, for anyone wondering. I grew up there but I’ve since lived in six other countries and I’ve been in the United States for about five years now. So my accent is completely messed up from that, it doesn’t belong anywhere, and it’s completely off putting to every single person who hears it. Thanks for the reminders, guys!”

Jake: “You have a speech impediment.”

Jake: “I’ve never seen a comment come back. That means he commented that, went and thought about it, and then came back and was like, ‘Alright, this isn’t that bad. But f*ck you, do you even lift?'”

Nick: “He thought better of telling me I’m terrible at my job, but he did want to come back with a new insult to suggest that I do not lift. Look, I just have weird genetics where all my muscle goes to my arse and nowhere else on my body. If these guys could see my butt, though. It’s superb.”

Jake: “This is from the Romanian deadlift versus deadlift video. First off, I was wearing joggers in that video, so how my legs got brought up, I don’t even know. But my legs are pretty small, so.”

Nick: “This has been painful.”

Jake: “Those are our top 5 we have, and we’ve got plenty more where that comes from.”

Nick: “Mine had a pretty strong theme running throughout. But I mean, engagement’s good. So long as we’re getting comments.”

Jake: “Yeah, my legs are really big insecurities, so make sure you keep bringing those up.”

Nick: “We are writers by trade, which means we’re extra insecure and self loathing, so just pile on, guys.”

Bonus Comments Asking Nick If He Even Lifts

This isn’t even all of them.