Bench Press Vs Push-Up: Which Is Best for Strength, Mass, and Power?

The bench press and push-up are upper body training staples, but which is best for your specific goals?

In this article we will take a deeper look at push-up, the bench press, and which one is best for strength and muscle development, as well as:

Want a visual breakdown for the bench press versus the push up? Check out our in-depth video below!

The push up-is one of the more foundational upper body strength movements for beginners and advanced athletes. This bodyweight movement increases upper body strength, muscle development, and can lay a strong foundation of shoulder stabilization for pressing performance.

Regardless of fitness level, the push-up is a must-master movement and can be used throughout a training career to further strength and muscle development and enhanced movement patterning of more advanced lifts.

To perform the push-up, start at the top of the plank position with the back flat. The arms should be fully extended with the hands directly underneath the shoulder joint. The feet and thighs should be pressed actively together.

Often, beginners will place their hands too far forwards in front of them. Be sure to place the hands under the shoulder joint, maybe even slightly back towards your hips.

Coach’s Tip: Assume a plank with the torso rigid and back flat. The head should remain in a neutral position.

While in the plank position, actively pull your shoulder blades together to create tension in the upper back. This will help stabilize the shoulder girdle and ensure proper stability in the lowering phase of the push-up.

Set the back by pulling the shoulder blades towards the hips and extending the upper back. Be sure to not let the hips sag or lower back hyperextend while in this position.

3.
Pull Yourself to the Floor

Once you are set, think about pulling your elbows to the back, similar to a row position. This will help activate the upper back muscles and provide you with stability as you approach the bottom of the push-up.

Do not let you head or shoulders slouch forwards towards the floor. Rather, think about pulling your sternum in between your hands.

Coach’s Tip: The thighs, hips, and chest should all make contact on the floor at the same time. If these are out of order or do not occur at the same time, this may suggest sagging of the hips and/or hyperextension in the lower back.

4.
Reach Into the Floor

Once you have touched the floor, press yourself away and upwards by trying to reach your hands into the floor. By thinking about reaching, rather than pushing, you can reframe the movement to have the body find stability and strength from the upper back.

Push yourself away from the floor, and focus on keeping tension in the upper back.

Coach’s Tip: Stay rigid in the torso and be sure to not let the hips sag in the upwards movement of the push-up.

Be sure to take a look at our Push-Up Guide to gain a deeper understanding of push ups and their benefits.

The bench press is one of the most recognizable movements throughout all of fitness. When the average person hears that you workout, typically the next question out of their mouth is, “How much do you bench?”

Be sure to take a look at our Bench Press Guide to gain a deeper understanding of the bench press and it’s benefits.

Both movements target a majority of the same muscle groups. The key difference, however, are seen when different hand positions are used. Below is a list of the muscles worked by both movements, as well as how hand-positioning can impact which muscles are targeted.

A narrower grip places more emphasis on the…

A wider grip places more emphasis on the…

What the Research Says…

Research on the specific head-to-head analysis of bench press vs push up is limited, however, there are plenty of studies reviewing the individual benefits of each movement. Below, we will highlight some of the key takeaways for overall strength, muscle mass, and performance that have been addressed by peer-reviewed studies.

How to Perform Close Grip Push-Ups

Assume a normal push-up position and place the hand narrower than your normal grip. A good rule of thumb is to go shoulder width or narrower and base hand placement on what’s most comfortable.

Once you’ve established your grip and push-up position, begin the descent by gripping the floor and keeping the elbows tucked.

Remember that the goal is to target the pecs and triceps, so think about loading these areas the most during the eccentric.

3.
Press Up and Squeeze

After you’ve hit the full eccentric, squeeze the pecs and triceps and press through the floor to return to your starting position.

Coach’s Tip: Remember to consistently grip the floor and be mindful of where you’re shifting force to!

How to Close Grip Bench Press

In the section below, we will discuss the various groups of lifters who will benefit from performing the bench press, push-up, or both in a training program.

The push-up, on the other hand, is a necessary movement for all strength athletes to master and maintain, as it can help improve joint mechanics and add additional training volume to the pectorals and triceps while minimizing stress on the joints. Assuming a lifter uses proper push-up technique, they should be able to benefit from both push-ups and bench presses within training.

Olympic weightlifters do not have the sport-specific need for increasing their bench press like powerlifters and other strength athletes. In weightlifting, pressing is done overhead, making the bench press and push-up assistance movements rather than key exercises for sports success.

The bench press and the push-up, as discussed in the above research finding section, can help lifters who may struggle with general pressing strength and muscle development of the triceps. Seeing that the chest and triceps are needed for overhead support and stability in both the snatch and the jerk, both movements may increase overall development of a lifter.

It is important to note that the bench press, dip, and push-ups can all increase muscle mass and pressing and lockout strength; however, if an athlete performs these movements incorrectly or does not strive to achieve muscular symmetry and balance they can develop limitations in shoulder mobility. It is best to use the bench press and push up within a training program in reasonable volumes and to monitor their effect on overhead mobility in the snatch and jerk.

CrossFit and functional fitness athletes can benefit from both improving upper body strength and mass development. Both movements may find themselves within competitive fitness WODs and competitions, making them sport-specific movements to athletic success.

Everyday fitness and gym-goers can benefit from improving both push ups and bench press strength and performance. Prior to diving into bench press specific programs, many lifters should develop proper technique, shoulder and thoracic positioning, and back development. Many gym-goers will default to jumping on the bench press or busting out some sub-optimal push-ups, only adding to the already poor shoulder mobility and structural integrity.

As a rule of thumb, lifters should master the push-up, pull-up, and inverted row prior to jumping on a bench press.

This will help ensure upper back stability, body control, and movement coordination; all of which can improve bench press performance and strength. 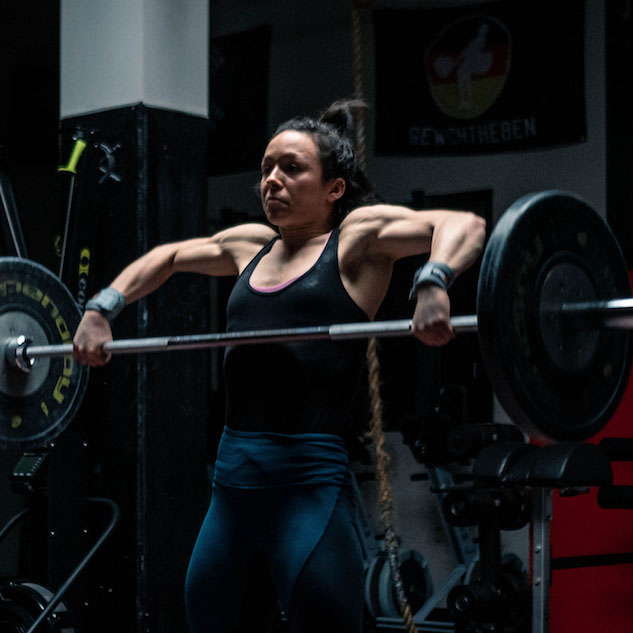 Which Is the Best for Chest Development?

As the research suggests, both the bench press and the push-up can be used to develop strength and muscle mass.

When using the push-up to develop strength, it is important to use comparable stress one would use in a heavy bench press set.

Often, the push-up lacks application to developing maximal strength in intermediate and advanced lifters due to lifters not adding enough external resistance. If you are someone who wants to perform push ups for strength and hypertrophy, rather than the bench press, then be sure to add loading to elicit a relative stress comparable to a hard set of 6-8 repetitions on the bench press.

The bench press is often regarded as the best movement for chest development as it allows for high amounts of loading to be applied to the upper body. Unlike the push-up, adding a few hundred pounds of external load is relatively easy in the bench press  compared to the push-up. Lastly, many individuals will find that the limiting factor in the bench press is chest and tricep strength rather than other factors (core stability, shoulder health, etc), furthering the usage of the bench press for maximal strength and hypertrophy in more advanced lifters.

Which Is the Best for Pressing Performance?

If you are someone who is looking to specifically increase bench press performance and are objectively using the bench press as a marker of upper body strength, then it makes sense to train the bench press on a regular basis.

That said, the push up and it’s variations should be used regularly throughout warm-up series and accessory segments to improve shoulder and scapular stability, core strength, and general fitness.

Looking to increase chest mass and bench press strength? Take a look at our top bench press and chest training articles below!

Sal Di Stefano to Mike O’Hearn: Changing Behavior Is the Key To Consistency

Trey Mitchell Recaps His Performance at the 2022 Rogue Strongman Invitational