While weightlifting calls for highly specialized athletes who have narrowed their focus to just two lifts, a Strongman must be a jack of all trades, capable of a multitude of ever changing tasks. This encourages the athlete to use the style they are most comfortable with, even though it may not be the best. A jerk done correctly can take years to master and becomes even more difficult for an already adapted athlete without sufficient flexibility. When someone is “decent” at an event, it can often be difficult to convince them to change.

For decades, the push press dominated the log and axel overhead lifts. A heavy, awkward metal cylinder or two inch thick bar, both lacking any whip, make you want to be out of the rack position as quickly as possible. A push press is easier to perform and learn and requires less athleticism, and most gym guys can teach it. 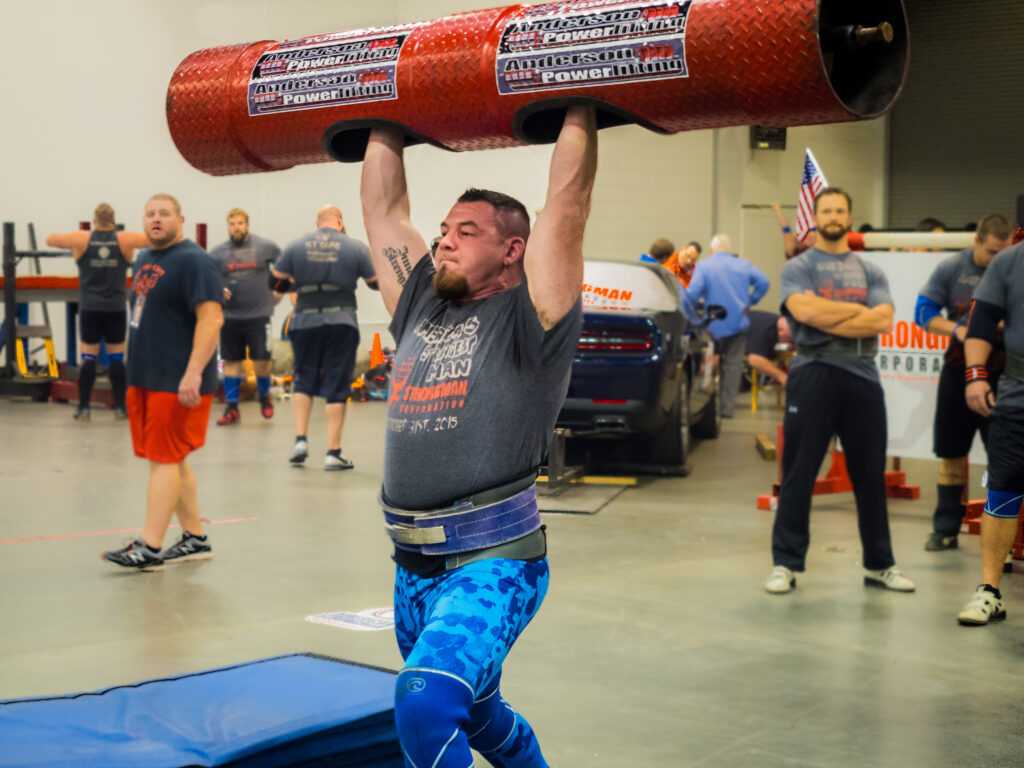 In the late 2000’s, that trend began to change. A pair of brothers (Kevin and Kirk Nowack) with a weightlifting background had become professional Strongmen, competing across the globe in the 105kg division. Curiously (or not so much if you are a fan of efficiency) they began jerking the odd objects in the overhead lifts with great success.

As an athlete and coach, I adopted the style and started teaching my students how to properly move weight. In 2007, my client Kelly Pichone set the women’s lightweight log and axel max lifts records using the jerk. Shortly thereafter, heavyweight professional Jason Krystal set the men’s heavyweight professional log record with a split jerk. It was quickly catching on, and I was certain all athletes would become jerk masters in the near future. I was half wrong.

On May 21, America’s Rob Kearney won the Log Lift World Championships in Lithuania with a lift of 202.5kg — as a 105kg bodyweight athlete (his lifts from Lithuania are embedded below). Kearney is a master of the log split jerk, hitting 180kg for multiples in the gym.

Rob is the lightest athlete to ever hit this weight. At Strongman Corporation’s America’s Strongest Man in 2015, he edged out push presser Sean Demarinis by 4.5kg for the max log in the 105kg class and was only outdone by a few kgs by one of the best heavies (that means athletes over 105kg, for readers new to the sport). His recent championships came while competing with athletes who tip the scales in the open class, many of them over 140kg. It is be rare to see one of his heavier competitors jerk the log. The push press reigns with mass monsters.

It seems the lighter athletes feel more comfortable with the technique while the bigger guys are having a hard time adapting. At the Arnold Strongman Championships in Columbus, Ohio, the middleweight and lightweight men and women were about 50/50 on push press vs. jerk. The most successful in the log though were jerkers. When we switched to the heavies, not a jerk was to be found. Why are some athletes refusing to adapt? In my opinion it’s simple: coaching.

It took me two years of coaching before I felt competent to jerk in a contest and another year before I attempted to teach the technique. I am a quick learner and take to weight training movements easily. The jerk is complex and requires perfect timing to execute. To teach it, a good coach is a must.

CrossFit has expanded interest in the lifts — weightlifting, powerlifting, and even strongman — and increased the coaching pool. Unfortunately for the rookie Strongman, finding an experienced coach hasn’t been easy, and many feel if their lift can keep them competitive, why change? It’s especially difficult to convince a huge Strongman whose mass can send 170kg skyward with less than perfect technique. But the reason is becoming clearer with every contest: you won’t win the overhead without it if a good jerker is there.

If you are ready to switch from the push press to the jerk for strongman events like the log and axel, here are a few pointers:

Update: The 2016 Log Lift Championships were held in Lithuania. This article has been updated to reflect that correction.