Training At Home? Skip These 4 Exercises (And What to Do Instead!)

Use these bodyweight variations below to better optimize your at-home workouts!

Bodyweight exercises are surging in popularity along with at-home workouts, which is great for lifters pursuing fitness from the comfort of their own home. However, this surge in bodyweight training popularity has also brought some “interesting” exercises that are being pushed on social media.

In this article, I’m not going to cover some of the — let’s call them over the top exercises — that are being pushed on places like Instagram for views, but more so common movements that can be optimized slightly better.

There’s nothing necessarily wrong with the movements below, however, they are movements that I feel could be passed on for better options. After all, if there’s an alternative that provides the same, or better adaptations, then why not opt for that one? 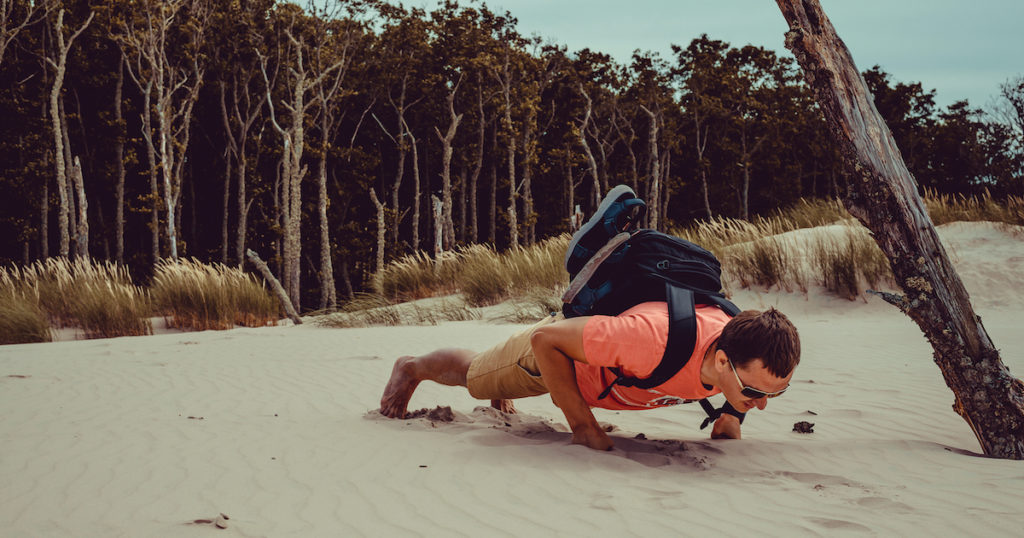 1. Dips With the Hands Behind the Back

It’s not uncommon to see bodyweight dips performed on benches and pieces of furniture with the hands behind the back and the legs in front of the body. This bodyweight variation always reminds me of the old school bodybuilding videos you’d see from back in the 1980s.

While it’s an okay exercise for targeting the triceps, it’s not exactly the best dip variation you can employ when equipment is limited.

Why It’s Not the Best: For anyone that as an internally rotated upper body (shoulders that round in), then this movement can put unneeded stress on the AC joints and the triceps’ extension can be limited.

Try This Instead: Instead of positioning the hands behind the back, try placing two chairs side by side on a surface where they won’t slide and performing more “traditional” gripped dips.

Don’t be mistaken, the one-armed push-up can be a solid training option for some, but the problem lies with how most end up performing them.

For example, if you look like a contortionist when performing one-armed push-ups, then I would have to guess without seeing your form that you’re likely limiting yourself.

Why It’s Not the Best: The push-up is designed to train the chest and triceps, if the body is taken and shifted to a point where the angle of the arm isn’t pressing down and leveraging these muscle, and the elbow’s alignment is whack, then gains are being left on the table — and for what reason?

Try This Instead: The assisted one-arm push-up will provide a higher training stimulus compared to the normal push-up and it’s a much more accommodating option for advanced and intermediate lifters.

In my humble opinion, the crunch is a “meh” core training option. For most lifters, the crunch will not even provide a viable training stimulus that’s comparable to their norm, and for newer lifters the crunch can turn into an exercise that appears to only be training cervical flexion.

Is there anything necessarily wrong with the crunch? Not really, there are just way better training options and uses of our time.

Why It’s Not the Best: The crunch is limited with intensity. The range of motion isn’t that great for creating a strong torso flexion and it’s an easy movement to rep through without creating much meaningful contraction.

Try This Instead: If you’re dead set on performing the crunch, then try directly extending the arms to the ceiling so they’re perpendicular to the floor and perform crunches while you keep the arms perpendicular and reach upwards.

This option will limit the cervical flexion component and force the upper core to create the contraction because the arms are serving as a self-cuing tool.

The curtsy lunge is performed exactly as the name states: you step back and perform a curtsy motion as if you were doing so in front of a crowd.

The curtsy lunge is often stated be an option for targeting the “inner thighs” (adductors) and the glute medius, but there are more accommodating options that put less potential stress on the lateral side of the knee that’s being lunged on.

Why It’s Not the Best: In theory, it’s a cool lunge variation, but if the goal is targeting the inner thigh, then other exercise variations will provide more benefit.

Try This Instead: For direct adductor training, try adductor slides and adductor planks and for glute medius training, swap in a front foot elevated or Bulgarian split squat with an offset load.

Bodyweight training should come with strategy and and be adjusted to best leverage our bodies for continual growth.

The above exercises are okay to perform, but there are options similar in nature that will provide the same if not better benefits without as much potential stress put on various parts of the body.