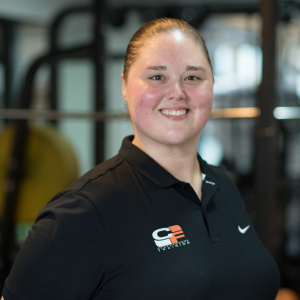 Cheryl Haworth was born on April 19th, 1983 in Savannah, Georgia, USA. Haworth began her weightlifting career in 1996 at the age of 13 and started traveling internationally for competition at 14. She began breaking American Records at 15, Pan-American Records when she was 16 and still holds the snatch American Record of 128kgs. Haworth is still credited with a Youth World Record, also in the snatch, of 125kgs made at the Sydney Olympic Games in 2000 when she was 17 years old. Until the Rio 2016 Olympics, Cheryl had remained the last American to win an Olympic weightlifting medal (Bronze, 2000 Sydney) and still is the last American to win a medal at the World Championships (Bronze, Doha, Qatar). Cheryl is a Goodwill Games Champion, Pan American Champion, two-time Junior Worlds Champion and competed in the Olympics three times. In 2004 Athens, Haworth earned 6th overall and came up with a fourth-place finish in 2008 Beijing. Cheryl was also the national champion from 1998-2008, eleven times consecutively. She has been a guest on The Tonight Show with Jay Leno, Live! with Regis and Kathy Lee (breaking the American Record Clean and Jerk live on television) interviewed by Tom Brokaw, Bob Costas, Katie Couric, Matt Lauer and others. Cheryl has been photographed by Annie Leibowitz, Howard Schatz and Mary Ellen Mark, to name a few and has appeared in numerous books, magazines, newspapers and other publications. Cheryl is presently a weightlifting coach in Athens, Ga. running Haworth Weightlifting (@haworthweightlifting), teaching seminars, coaching clinics and traveling in an effort to promote the sport of Olympic weightlifting.

BarBend covers a wide range of topics in strength, including training, nutrition, sports, news, analysis, reviews, and opinion. Whether you’re a seasoned lifter, new to the gym, or a dedicated strength sports fan, we’re your go-to source for the content you need to know!

Our team of in-house editors has decades of combined experience in strength training content. The majority of reviews on our site are written based on their first-person experience and testing. We also feature content from dozens of top contributing writers, coaches, and athletes from around the world. And BarBend’s Expert Network features medical professionals, trainers, and researchers who help verify the accuracy of our content, specifically select training and reviews topics. Content that is Expert Verified is indicated at the top of each corresponding article. We also work to keep our content up-to-date and indicate the day of the most recent editorial updates at the top of our articles.

BarBend is also the Official Media Partner of USA Weightlifting, the governing body for the sport in the United States.