Eddie Hall On Thor Breaking His Deadlift Record: “I Do Not Trust The Icelandics”

2017 World Strongman’s Man champion Eddie Hall held a live Q&A from Stoke-on-Trent, England earlier this week. The questions ranged from asking about the health and safety of Hall and his family during the current lockdown in England to his thoughts on 2018 World’s Strongest Man champion Hafthor Bjornsson attempting to break Hall’s all-time world record deadlift of 500 kilos, which he plans to do on May 2nd in Iceland.

You can see the entire Q&A in the video below from Hall’s YouTube channel:

Hall currently holds the current all-time world record deadlift of 500kg/1,102lb. He completed this feat of strength on July 9th, 2016 at the World Deadlift Championships in Leeds, England. You can see that lift in the post below from Hall’s Instagram page:

Hafthor Bjornsson missed one attempt at a 501kg/1,104lb deadlift at the 2019 Arnold Strongman Classic, and was planning to try again at the 2020 World’s Ultimate Strongman competition in Bahrain this weekend. Except it’s not happening this weekend anymore; WUS was postponed due to the coronavirus pandemic, as are many other strongman events.

But Bjornsson didn’t want to wait. He will attempt the deadlift on May 2nd “in Iceland and alone besides a small team of under 20 people” according to a post Bjornsson shared on his Instagram page on March 29th.

Do you personally think [Hafthor Bjornsson] should do more than 501kg considering you broke it by so much before?

This was the second question that Hall was asked during the Q&A (it comes at 3:25 in the video). The part of the question stating that Hall “broke it by so much more” is referring to the fact that the previous world record was 463kg/1,020lb, which he himself pulled at the World Deadlift Championships in 2015.

Before you read Hall’s answer, note that Bjornsson said that,

This will be recognised as a world record as there will be an official/judge there to make the call, and the event will be held to the same high standard that competitions are.

Here is how Hall responded to the question of whether Bjornsson “should” lift more than 501kg. The emphasis in bold font was added by BarBend.

“Breaking it is breaking it. If he breaks it a kilo, ten kilo or thirty kilo, doesn’t matter really. If he breaks it, he breaks it. I did something special; I broke that 500kg barrier when everyone thought it was impossible. We wouldn’t even be talking about the 500kg deadlift if it wasn’t for me right now.

“As I’ve said before, I’m getting sick and tired of people saying they are going to pull it, Thor especially. I’m sick to death of seeing my name in his title on YouTube videos… and it’s just using my success to drag in for his views. If you’re going to pull it, then pull it. It’s been four years [since the] 500kg deadlift. No one has come close to it for four years. That is unheard of in strength world. Records will last a year or two tops, but for a record to last four years — I’m very proud of that.

“Thor is going for the 501kg deadlift. He is doing it in his gym. Under the circumstances, it’s tough. If I said, four years ago, if I pull 500kg in my gym with my weights and my sponsors pushing it, supplying the weights, giving the prize money, giving me the live stream — if I did that four years ago in my gym, people would call it bullshit, referee there or not. It’s a tough one. The circumstances make it very hard for this to be made possible. Thor is going for it in his home gym, I believe. He’s got Magnus Ver Magnusson refereeing it.

“Again, you can say whatever you want, but if the tables were turned, and I was going to go for 501kg in my basement downstairs with calibrated plates and a referee, no one would count it. No one would count that as a world record. I’m not going to count it as a world record. He’s had plenty of opportunities the last four years. The last four years he has been telling people he is going to do it and he hasn’t. He could’ve done it in Dubai late last year. He could have done it at Europe’s Strongest Man. It just doesn’t feel right to me. Why not wait til this is over? Why not wait til October when the World’s Ultimate Strongman does the deadlift.

“People say I’ve been disrespectful, I don’t care. If the tables were turned and I was doing that, people would call B.S. So I’m calling B.S. on Thor. If he’s going to do it, do it. Good luck to the guy. I will be the first one to say well done and shake his hand. I know what it takes. I genuinely know what it takes. So that is where I stand on the Thor 501kg deadlift.”

It’s worth pointing out this isn’t the first time Hall has cast doubt on the legitimacy of Bjornsson’s accomplishments, calling him a “paper champion” after winning World’s Strongest Man in 2018 — because Hall wasn’t there to beat him.

Their relationship is fraught at best. After hearing about Hall’s comments, Bjornsson took to his Instagram stories where he shared a picture unfollowing Hall’s account with the caption:

“Disappointing to see this come out of the sport. Sorry [Eddie Hall] but you lost all credibility and my respect.”

The next story was also directed at Hall with Bjornsson saying:

“Eddie you can think it won’t be a record all you want, but your record will fall.” 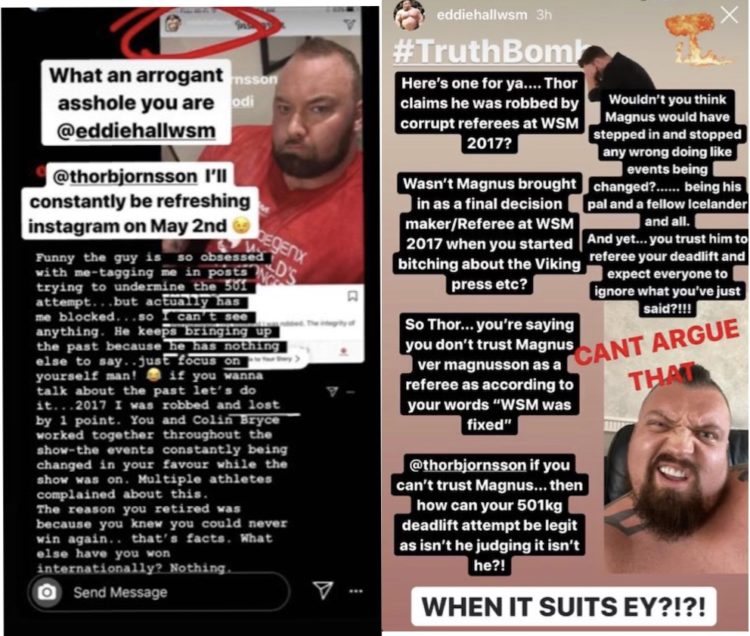 Bjornsson did say that he’d have a judge there to make the call — in any case, we can’t wait to see what goes (up and) down on May 2nd.