The International Weightlifting Federation (IWF) announced today that International Olympic Committee (IOC) retesting of London samples has returned positive tests for 11 weightlifters. This is the latest in a series of announcements over the last three months announcing suspensions for lifters following 2008 and 2012 Olympic sample retests.

The findings — as indicated in the IWF announcement — came as part of a second wave of IOC retests for the 2012 London Olympic Games. While some in the international weightlifting community suspected suspensions from 2008 and 2012 retests were done, neither the IWF nor the IOC confirmed that was the case.

Information regarding previous suspensions from earlier this summer can be found here, here, and here.

The eleven lifters affected in this announcement are:

For reference, all three original 2012 podium finishers in the women’s 75kg class (Zabolotnaya, Kulesha, and Svetlana Podobedova of Kazakhstan, suspended following an earlier retest) have now tested positive, and assuming their suspensions are upheld, each will lose their London Olympic medals. Lydia Valentin (Spain) will presumably become Olympic champion.

An excerpt of the IWF announcement — including which substances each of the lifters tested positive for — is embedded below. 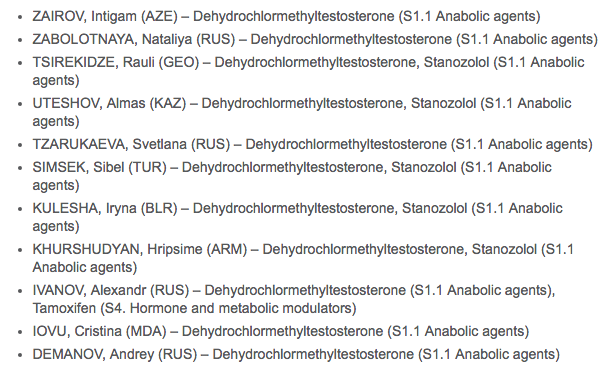 A video of Ivanov’s performance from the 2013 World Weightlifting Championships is embedded below.