Why Every Rookie Powerlifter Needs a Handler for Their First Meet

If you think that powerlifting is a solo sport, you may be largely correct. When you step onto the platform, after all, it is just you and the weights. However, similar to finely tuned race cars, powerlifting athletes need pit crews. Well, sort of.

Game day in powerlifting is surprisingly chaotic. Although it might appear to spectators that a competition runs like a well-oiled machine, methodically rotating athletes on and off the platform for attempts, a lot happens behind the scenes, and lifters – especially new ones – will benefit greatly from a handler who can help ensure that the lifter does not miss a lift. And when I say “miss” a lift, I mean both figuratively and literally, because poor backstage planning might not only mean a failed attempt, but even missing one’s turn at an attempt.

Powerlifting is a growing sport and it is always interesting to see the number of brand new participants in each competition. Well, every meet has a multi-step check-in process, and it can be a bit overwhelming for first-time lifters. Athletes need to queue up to sign in, go through equipment checks to ensure that their singlets/ belts/ shoes/ wraps/ socks/ etc. comply with the rules, obtain squat and bench rack heights, weigh-in, inform the judges what weights the lifter plans for his opening attempts, and then of course refeed and warm-up. And importantly, this all needs to be correctly timed so that the lifter is set when they hear “platform ready!” following their name.

Picture going through the above process in an environment of sensory overload: the sound of barbells clanging against racks and weight plates palpably thumping against the ground, blaring music in the background, a meet announcer calling out lifters’ attempts over the microphone, the smell of chalk and sweat and baby powder, the sight of myriad lifters hulking to and fro, an audience cheering “UP!” at the instant a weight begins to slow during a competition attempt, the visual of meet personnel looking official in their blue blazers and charcoal slacks, and the adrenaline-filled feeling of anticipation.

A game day handler can help a lifter – especially a new lifter – tune out or at least better cope with these various distractions. It can be stressful, particularly for rookies, to try to make sense of the competition scene, fumbling from check-in queue to equipment inspection queue to rack height queue to weigh-in queue, all while lugging a day’s worth of paraphernalia and nourishment. A game day handler can navigate through this melee and possibly even help the lifter take a load off by carrying some items. These might seem like small contributions, but they can go a long way when a lifter is trying to keep calm, rested, and focused in the face of mounting pressure.

[Looking for more details on the rules of game day? Check out our guide to the rules of a powerlifting meet.]

Warming Up at a Powerlifting Meet

There is an art and method to warming-up, particularly on game day. There are a couple of guiding principles here. First, warm-ups should prepare the lifter without generating fatigue. Second, the warm-up should be completed in time for the lifter’s opening attempts. A game day handler is crucial here.

A game day handler will load and unload the bar during warm-ups. This is not a luxury that lifters enjoy during training, but on game day, it’s all about putting everything into one’s attempts on the platform, and even the effort of loading and unloading bars in the warm-up room can detract from that goal. Think of it this way: if you are competing, your hands should only be touching barbells on game day, not weight plates.

Timing. Timing is critical, challenging, and when exactly an athlete gets that “platform ready” signal is beyond the lifter’s control. There are a number of factors which affect timing, including which flight the lifter is placed into, and crucially, the order of lifters within the assigned flight.

Unfortunately, the order of lifters is not set until after everyone in a weight class has submitted a list of planned opening attempts. Notably though, each lifter is provided with a set amount of time to commence a lift (in the USAPL, it is 1 minute starting from the “platform ready!” call), and so it is possible to calculate approximately how much time there will be until liftoff once the roster is published. Consequently, it is necessary to keep a close eye on the various display monitors set up around the venue because they will show in real time who is currently lifting as well as the order of athletes to follow.

Therefore, if a lifter wants to finish his last warm-up, say, five minutes prior to his opening attempt – an amount of time sufficient to permit recovery but small enough to stay warm – someone needs to watch the clock and the venue’s monitors. Since an athlete’s focus should be on performance, it helps tremendously when the handler takes care of timing.

Warm-up timing can also be tricky because competitors who often have never met and who tend to be pretty psyched up on game day, need to share equipment and space. Although there is a lot of camaraderie in the sport, certain pleasantries might not be present in the warm-up area where lifters are tending to their own business in a first-come-first-served environment. Having a clear-headed game day handler who can diplomatically organize an efficient rotation of lifters on a warm-up rack or platform is helpful, and something that all competitors benefit from and tend to appreciate.

Finally, as a lifter’s warm-ups approach opening weights, it is important for that lifter to start receiving competition commands, in order to tune up that athlete’s ability to wait and listen for the judge’s calls. The game day handler can give these commands.

[Learn more: 7 things every powerlifter should ask before their next meet.] 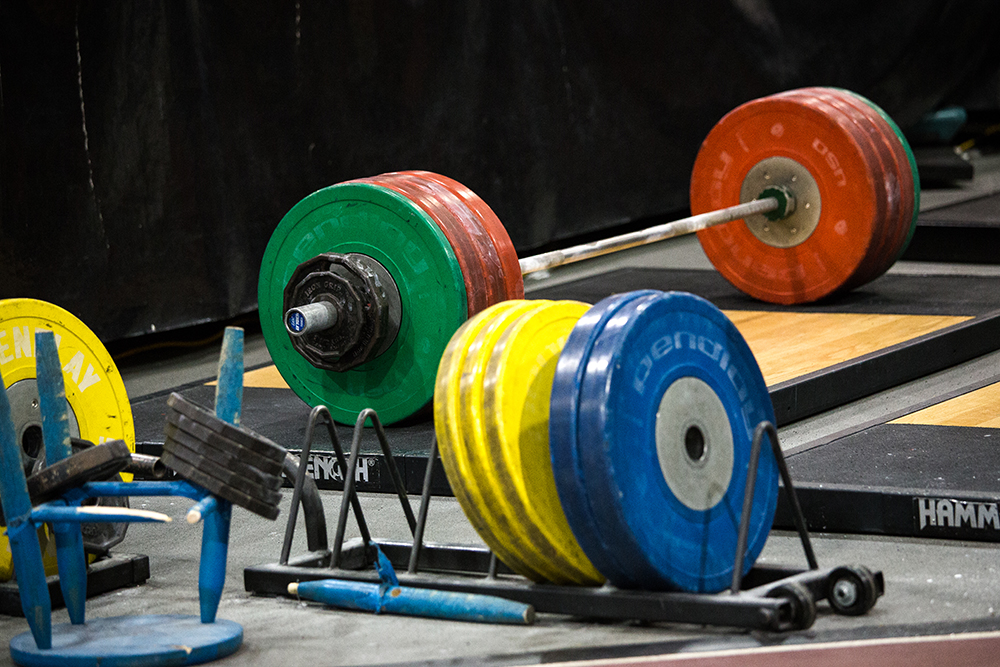 A good game day handler will give more than just a hearty trap slap. By the time that a lifter is called for his attempt, he might need to have his back chalked for traction or his legs baby-powdered for lubricated deadlifts. A game day handler can help with these things. In fact, a game day handler is needed for baby-powdering because a lifter can’t afford to get any on his hands, or spill any baby-powder outside of the designated powdering area (provided that the meet venue permits baby-powder at all).

And, once the lifter steps onto the platform, the handler’s job isn’t over. Some athletes use nose tork smelling salts or ammonia and/or listen to music through headphones to get amped. Someone will need to hold these personal effects when the athlete stomps onto the platform. It’s also a great idea to videotape each of the athlete’s attempts for post-meet analysis. And last but not least, hyping up the athlete with a stinging trap slap or even just some choice words can go a long way. You guessed it – the game day handler does these things.

After an athlete walks off that platform – hopefully with three white lights – it’s time to march over to the meet officials’ table and let them know what will be the next weight to attempt. There’s not a lot of time to pick attempts, and hopefully there’s a game plan already in place so that selections are not random like picking numbers out of a hat. However, intelligently deciding exactly what should be the next weight to attempt is something that a game day handler can help with, since the handler will be a sounding board who can give instant sensible feedback on your last lift, while also keeping an eye on your competition for you. And remember, unlike you, your handler won’t be drunk on adrenaline.

[More from the author: 6 reasons meets go badly for powerlifters.]

How to Find a Game Day Handler

If you have a coach who writes your programming, then that person would make an ideal handler, provided that you and your coach live in the same locality and provided that he is available on game day. If, however, the person who writes your programming does so remotely or is simply unavailable on the day you are set to compete, it is certainly fine to ask a friend or training partner. Make sure though that the person you tap is someone who has adequate experience competing in the federation where you will be lifting.

What if you are a new lifter who cannot find a game day handler at all? Should you still compete? Absolutely. You may well be at a disadvantage, but life is not perfect. Competing will nonetheless offer great experience. New lifters should remember that each competition is only a piece of a body of work.

Having a game day handler is remarkably helpful, particularly if you are new to powerlifting. Navigating one’s way from signing-in to stepping onto the platform is an involved process, and although experienced powerlifters will already know their way around a competition, it is tremendously useful to have someone present who can help steer you toward nine sets of white lights.