If you have ever heard this phrase, then most likely you have been in the presence of weightlifting greatness. No, not an athlete the caliber of Pyrros Dimas. Or even a coach with the strategic savviness of Ivan Abadjiev. I am referring to the lanky, silver haired technical official from Winnipeg, Canada named Richard Mason, who is quickly becoming the recognized English speaking voice of international weightlifting, the world over.

For the better part of a month, Mason kept busy as the official announcer of the 2016 Summer Olympic and Paralympic Games, for weightlifting and powerlifting, respectively. In early September, I spoke with Richard over WhatsApp while he was on location in Rio de Janiero, Brazil. We even had relatively good reception and internet connection considering the infrastructural problems that were reported with the Summer Olympics. 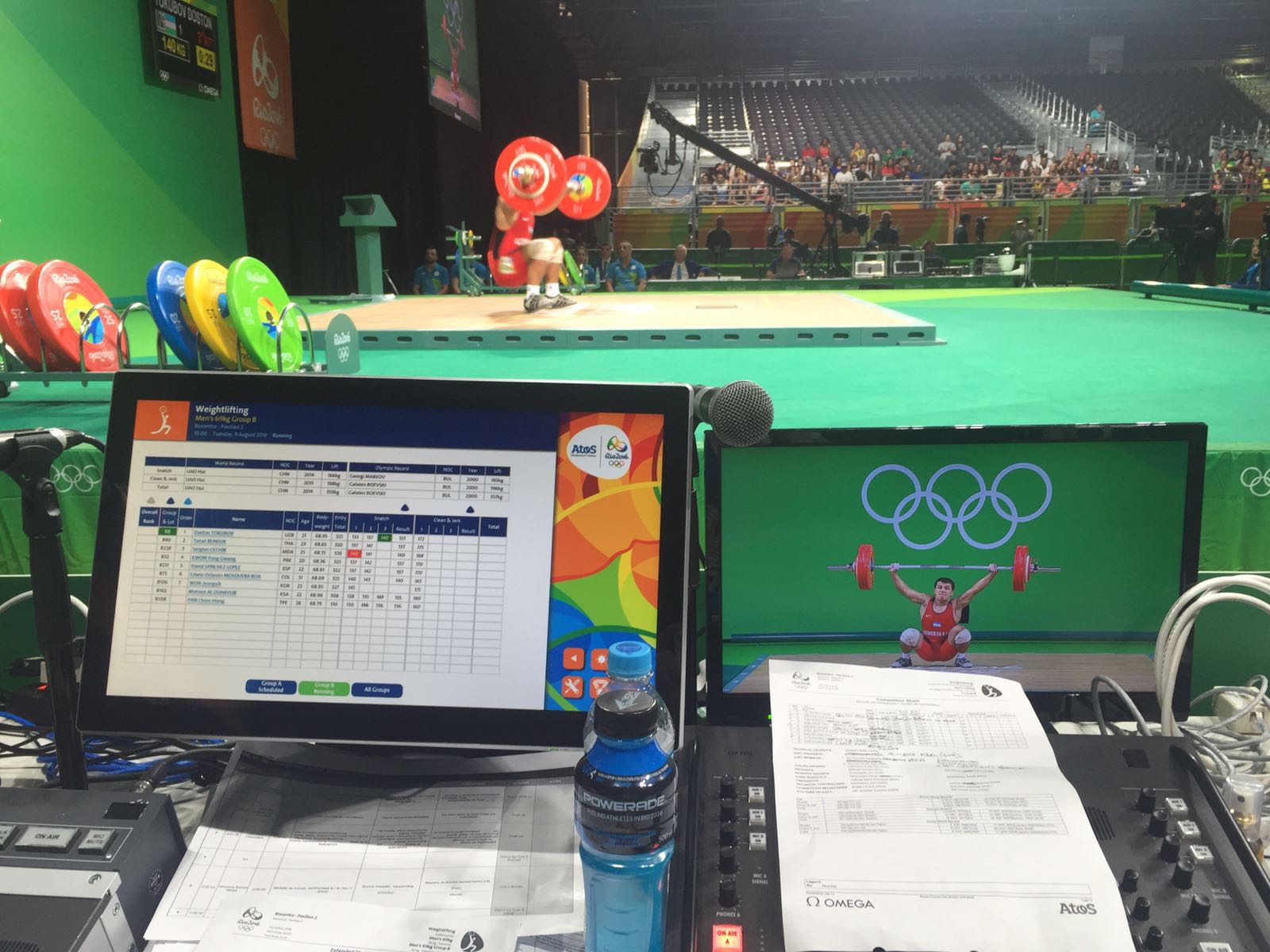 When I asked him what feat of weightlifting impressed him the most, he quickly informed me it was the performance of Colombia’s Oscar Figueroa, who won the gold medal in the 62KG (136lb) category, and then retired as the champion. Mason informed me that there has never been a South American to win a senior level world championship on their home continent.

The most awkward moment came when Finland’s 85KG (187lb) athlete Milko Tokola completed his final clean & jerk attempt of 175KG (385lb), and after an intense celebration, he fainted and fell off the platform. Thankfully no harm was done, and he was OK.

The most impressive session of weightlifting, in Mason’s opinion, was the battle in the superheavyweight category between 2012 Olympic Champion Behdad Salimi and the man that would dethrone him, Lasha Talakhadze. In a matter of seconds, there were two new world records set in the snatch. On the final lift of the session, and the culmination of ten days of weightlifting, Talakhadze set a world record with a 473KG (1,041lb) total. This happens to be the most weight lifted in total since Leonid Taranenko of the USSR totaled 475KG (1,045lb) at the Samboy Chips Cup in 1988.

Mason’s journey from local official in the Manitoba Weightlifting Federation to the official announcer of the Olympic Games is long, yet fascinating at the same time. As an International Weightlifting Federation (IWF) Level 1 referee, he is considered one of the best officials in the world. The honor of being selected to announce was not something that happened overnight, but rather over years of travel, work, and love of the sport. 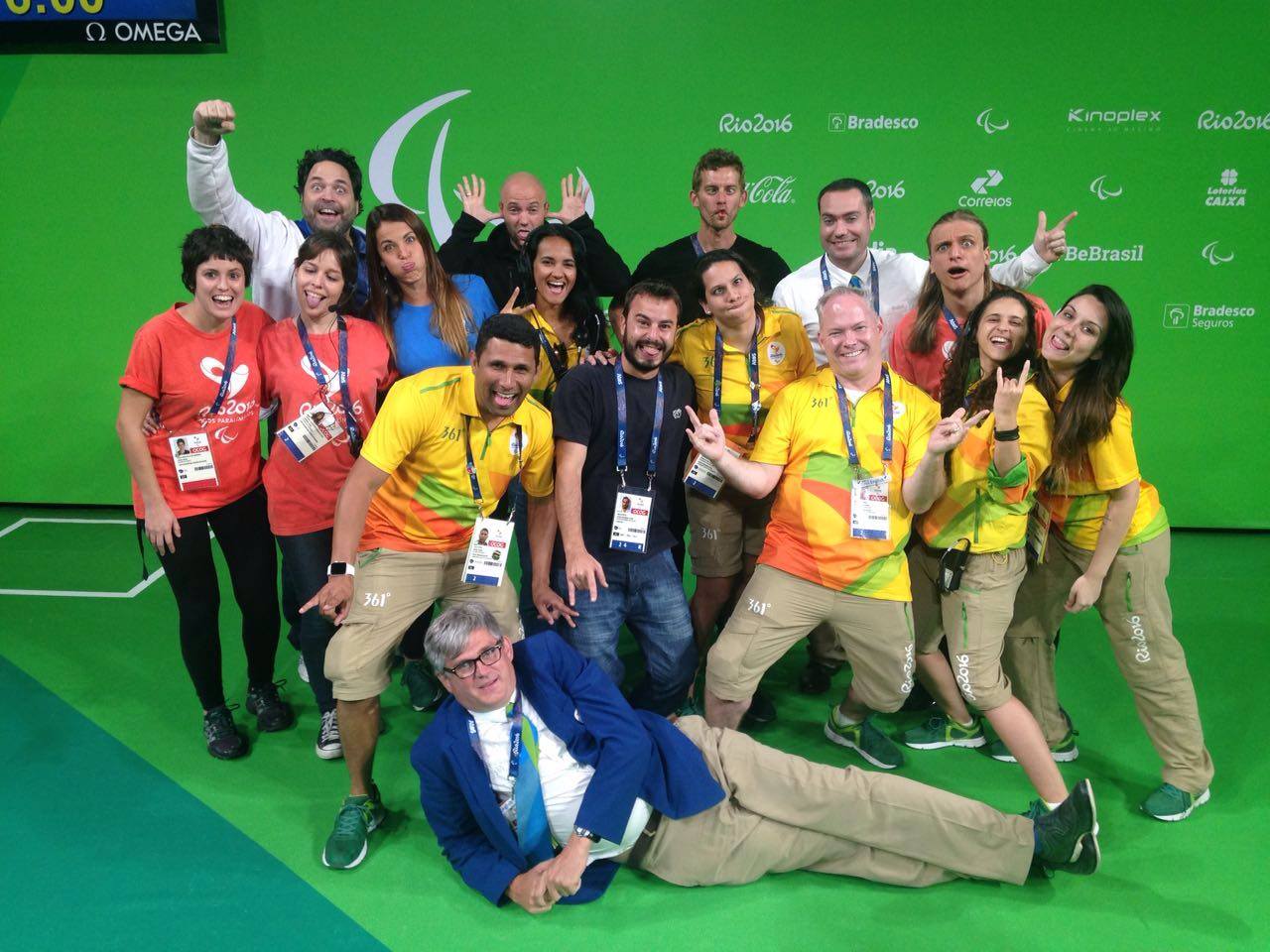 So where does the story begin? In his own words:

“Fifteen years ago I fell in love with a lady [Richard’s wife is Canadian Weightlifting record holder and multiple time world team member Suzanne Dandenault] who was a weightlifter. I had been an athlete and referee in volleyball, but I wasn’t strong enough to lift and not smart enough to be a coach. So I found my niche as a referee.”

On November 6, 2009, Toronto won the bid to host the 2015 Pan-American Games. The Pan-American Games are the world’s third largest international multi-sport event, behind only the Olympic Games and Asian Games. Needless to say, it is kind of a big deal to be chosen to participate in any capacity: athlete, coach or official. When this was announced, Richard knew he wanted to be part of it.

In 2011, Richard earned his IWF Level 2 Referee certification, which meant he was qualified to referee weightlifting events anywhere in the world. The Canadian Weightlifting Federation has two large national events every year; the Senior National and Junior National Championships, along with regional level and local level competitions. Mason knew that he needed more experience as an official to work towards his goal. He decided to contact USA Weightlifting (USAW) about the possibility of him volunteering at their events.

To his surprise, there was a growing population of weightlifters and a need for qualified officials. What started out as a road trip through the Midwest to officiate at the 2011 USAW Senior National Championships in Council Bluffs, Iowa, evolved into a career where Mason is as well known south of the Canadian border as he is in his home country (if not more).

He has volunteered his time at the American Open in Palm Springs, California, as well as Washington, DC. At the 2012 Olympic Trials in Columbus, Ohio, Mason served on the jury for every session except the Olympic Trial session, where he deferred his seat to six time World Champion Tommy Kono. Mason has also brought other qualified officials to the USA to help at national events, and vice versa; Americans have ventured north to help at the Canadian National Championships. There now appears to be an unofficial free trade agreement between USAW and the Canadian Weightlifting Federation for officials to help at national level events. 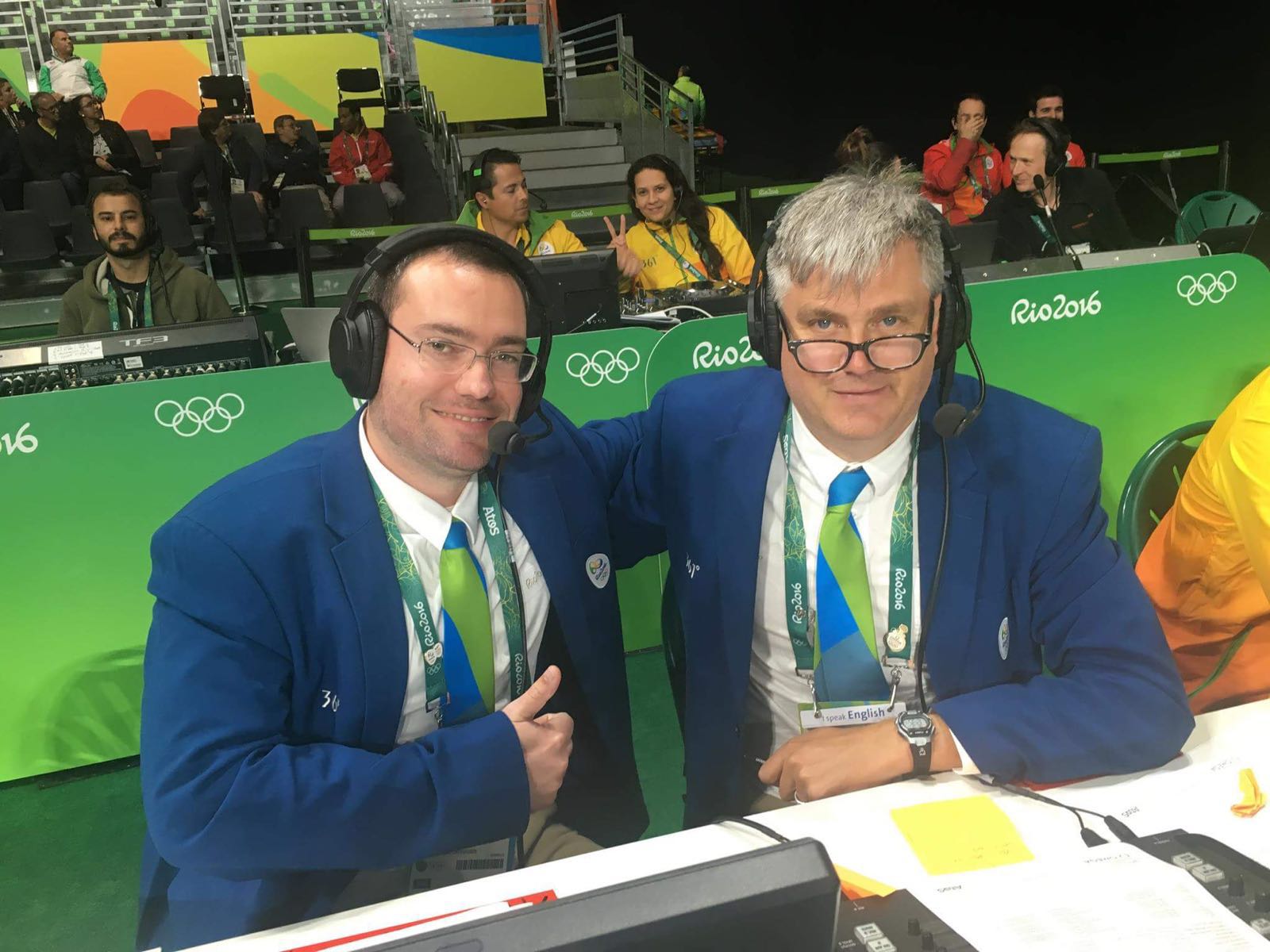 In this author’s opinion, what Canada’s federation overlooks and USAW appreciates is that Mason is the type of person that generally wants to help people, and he does that through entertainment value. By day, Mason is a mild-mannered television producer on CTV Morning Live in Winnipeg. In this capacity he knows how to get a crowd excited about the content. As a weightlifting official, he has taken that passion and energy and transformed it into being one of the top weightlifting announcers in the world. This is because he is able to rally a crowd to be excited about the action on a platform. This is regardless of whether the venue is a local meet or the Olympic Games, and as a weightlifter, that is the type of atmosphere I want for a competition.

In 2014, the Canadian federation nominated Mason to be an official at the Commonwealth Games in Glasgow, Scotland. With almost 5,000 athletes representing over 70 countries, this international multi-sport competition is one of the largest athletic competitions in the world. It is hosted every four years and celebrates the tradition of the British Commonwealth. America exited the British Commonwealth in 1776, so this event does not receive much media coverage; however, it is quite a big deal. Mason was chosen to be the announcer for weightlifting based primarily on a demo tape of his announcing that he submitted to the meet director, Matthew Curtain — who also happened to be the meet director for the 2012 Olympic Games.

In Glasgow, Mason brought the energy and rocked the event hall for the thousands of spectators in attendance. Also in attendance were multiple high level officials of the IWF as well as 2016 Olympic Games Meet Director Pedro Meloni. This paved the way for his invitation to more prominent competitions in the near future. 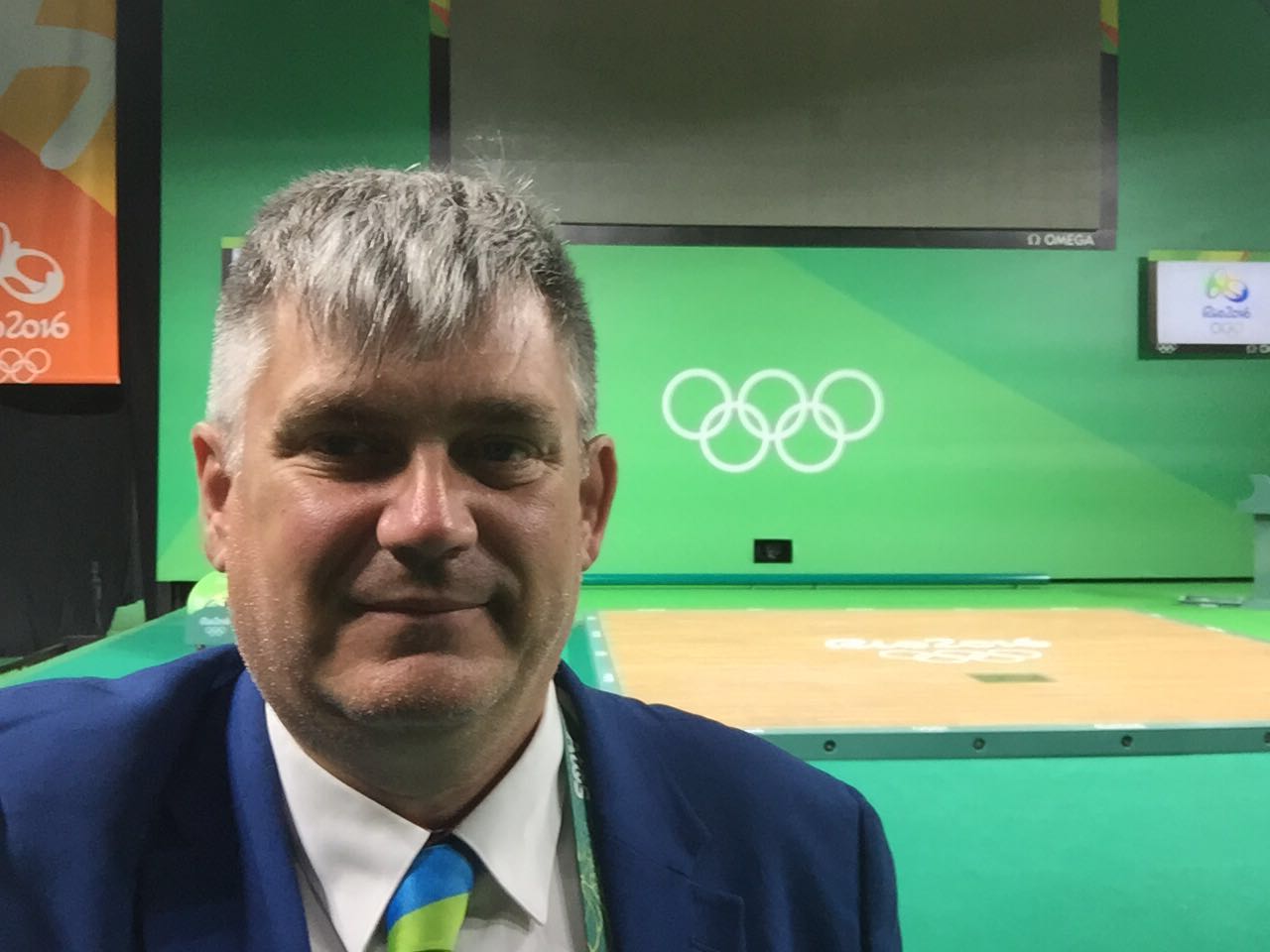 The Pan American Weightlifting Federation invited Richard to be an announcer in Toronto for the 2015 Pan American Games. After that, USAW and the IWF invited him to be one of the official announcers for the 2015 World Championships in Houston. Finally, in the spring of 2016, he received the call: the IWF invited him to be the official announcer for the 2016 Olympic Games. A goal that started in 2009 to work at an international event in his homeland transformed into a prominent role in four international competitions and fame throughout the global weightlifting community.

Going forward, Mason has said he wants to continue to work as a technical official for as long as he is needed. He already has looked at the 2017 and 2018 calendars and has ideas of what competitions he may like to announce at. In the near future, he is hopeful to be invited to announce at the 2018 Commonwealth Games in Gold Coast, Australia. He is anticipating being at all the Canadian National events, and feels strongly he will journey “south of the border” to Chicago for the 2017 USAW Senior National Championships.

Throughout Mason’s journeys, he continues to be impressed with USAW events. He has seen the trials and tribulations of growth in Canada and in the USA, and he feels the expertise and leadership of Phil Andrews is what makes a three platform event in America feel world class. With three platforms running at the same time, it would be a crowd’s delight to have Mason on the first of three platforms — perhaps to be joined by USAW legend Denis Reno and 2015 World Championships announcer John Filippini on the third.