What I Learned in My Rookie Year at The CrossFit Games

In July 2016, Ian Berger competed in his first Reebok CrossFit Games as part of Team CrossFit Dynamix. Presented as an op-ed, below are his thoughts and reflections after his first CrossFit Games experience as an athlete.

This year was my first year competing at The CrossFit Games. And prior to 2016, all I knew of the Games was what I watched online, maybe on ESPN. The actual experience of competing there exposed me to an entirely different side of the athletes and event that the could only be absorbed from being there. Below is a day-by-day take and recap of my experiences, along with some more introspective takeaways from the competition.

One of my favorite part of the event was registration and the swag (free stuff!). Before the Games starts, you officially register, and Reebok outfits you with more gear then you will ever need. There’s even a barber giving free cuts at registration to make sure we looked good.

A Reebok representative lays out all of your apparel and explain how it fits. You then receive headwear and water bottles, followed by shoes: six pairs, including cleats, Nanos, sprints, a trail shoe, running shoe, and a lifter. Next comes a photo booth to take pictures in your new gear, then all of the sponsors lined up to fill your bag with everything from sunglasses to a Compex muscle stimulation unit. The final stop was a 5.11 Tactical Booth to get fitted for custom weighted vests.

After all of the swag, we had an athlete reception. This was quite intimidating, and it really amounts to waiting to be briefed on the painful workouts that would ensue. Dave Castro spoke and started off by promising a Games like we have never seen before, events that would challenge us mentally and physically. He then began to explain of some the week’s workouts; you could see the look of fear in every athlete’s eyes, and while some would smile at the announcements, others visibly looked panicked already. Once the workouts were announced, we were huddled into rooms to go over movement standards and the flow of events. All the individuals were told was that they had to be in the lobby by 3:30 am; fortunately, I was competing on a team. Only after the briefing did it finally sink in what I was in for.

Teams didn’t start until 7 pm. I watched the individuals hit their events and tried to do everything possibly to distract me from the nerves. We got to the stadium and were lined up behind the warmup area. For what felt like forever, we waited with our vests on to be told what to do. Standing next to the likes of Rich Froning and other amazing athletes just added to the anxiety. We couldn’t leave the sidewalk, so athletes ran up to bushes or trees to release a nervous pee.

When we finally were instructed to march down to the start line, I honestly didn’t want to. As we lined up, Dave Castro rode up on a motorcycle and stated: “This is going to be a flexible cap; it’s slightly different than what we tested so I will decide when it has been enough.” At that moment, I released exactly how much the Games were his show, and he could — and would — do whatever he liked.

Murph begins, and we are off, 240 people running at the same time on a narrow road. Elbows, shoves, and jostling occur as if the rules of fair play have gone out the window. The rest was a blur, but I remember the worm squats and shoulder to overhead being particularly brutal. Before I knew it, I was a sweaty mess crossing the finish line to get the vest off immediately. Despite the pain, it was one of my favorite events, and I couldn’t believe that our judge ran with us the whole event (kudos to fit judges!). After the event we were told to be at the stadium with all of our gear to depart at 8 am.

Not knowing what I was doing — coupled with the broadness of having to bring everything left — was enough to make me crazy. We arrived at the stadium and were packed on a bus. The bus ride consisted of nervous jokes and small talk to ease the anticipation. Finally, we were told we were going to the beach for a 500 m partner ocean swim. As I got to the beach, I found my friend Khan Porter for tips, as he had just completed the individual version and come in 2nd. He said get out in front for the sprint to the water and keep distance. Suddenly, it was go time: swim cap on goggles around my head waiting for go.

Two minutes until start, and I pull my goggles down to my face — and then the band holding them together snaps. I am freaking out now, so I straight up ask Dave Castro what to do; he proceeds to ask one of my teammates if I can borrow theirs. I now have a pair with a minute to start.

The swim itself was terrifying: People are starting to catch me, swim on top of me, pushing and grabbing. It was absolutely terrifying, and I couldn’t wait to get out.

One of the craziest part of the Games is that a lot of the equipment you will be using for an event is never in the warmup area. On Thursday, we had three person deadlifts with an axle — which none of us had ever done. The contraptions being built in the warmup area to mimic the axle were all creative, and each team tried to keep theirs private. This was the first event in the soccer stadium during the day, and the stadium was already blazing with nowhere to hide from the heat.

It turned out the deadlift was easy, and the event really just came down to the handstand walk. It amazed me how quick the events went and how they got you off the floor even quicker. We were briefed on the following day in a small area and let go.

Not knowing what certain pieces of equipment will be like is a game changer. On Friday, we had rope climbs, with the bottom of the rope suspended about 7 ft in the air. The ropes were difficult and just plain confusing to figure out. When to clasp your feet was a toss up. This went right into a worm sprint. When you finished the worm, thinking of sprinting was alarming.

I finally began to realize the Games move at a pace that training will never mimic. Heading into Saturday, the individual athletes all looked stressed and beat down. A few looked like they were just having fun, but in general athletes across the board were highly emotional.

The first team event Saturday was the triple double, but it introduced a heavier jump rope for double unders and required you to move all of your equipment — mats and all. This was fast and chaotic, and I had to really focus on making sure I did my part and never spaced out.

The berm Bob was a grueling event, and all we knew of the event because we’d watched the previous heats. Four rounds, and during each one it felt like the Bob got heavier and the berm got steeper.

The actual event looked like a war scene as teammates pulled each other up stairs and people wrestled for position on the narrow course. It was interesting to see every team’s strategy as they lined up, as we were allowed to put males and females wherever we wanted.

On the final day of competition, the vibe took a perceptible change. After all, only the top 10 teams got to perform the final workout. What I remember most distinctly was the utter chaos of the final announcement. Only the team captains were being briefed, and the only information was that we needed to be ready for anything in 10 mins and have our IDs handy.

As you could imagine every team was in a mad dash to warmup area to get all of the necessary gear. Shortly thereafter, a workout combining the peg board and thrusters was announced, and were walked out into the holding area. This felt like an ancient, coliseum-type battle: send one person out at a time, and you couldn’t watch until you had finished. The arena was packed and fans roared, and cameras seemed to be surrounding you during every rep. The pegboard was way harder than any peg board I had ever used before, and it completely crushed me.

By the time my last teammate came out to take on the event, the final points spread had started to materialize, and it was a sobering conclusion: We were going to miss the podium by a few points. It’s a devastating conclusion in that state of fatigue, but I’m proud of my teammates for handling it as mature, seasoned athletes.

The final “official” activity of the day was getting drug tested, and yes, this does actually happen at the Games. It’s pretty straightforward: A man tells you to drop your shorts to your ankles and lift your shirt up, and he watches as you pee into a cup. It’s an interesting conclusion to a roller coaster week, for sure.

1. The Games are an even more intricate, massive event than I would have expected. And that wouldn’t be possible without all the volunteers. It seems like CrossFit has an endless army of judges, athlete services, and athlete liaisons for every minor detail.

2. Dave Castro calls the shots, and it is his show.

3. The amount of gear is ridiculous. It’s seriously unknown and unknowable from the equipment to the task.

4. It is an emotional weekend, and you have to treat each event on its own with no attachment to the outcome. The athletes are human and no camera can catch all the highs and lows.

5. It’s very easy to be comment on athlete mistakes and inability without taking into the context the entire scope of the week and workload required.

6. The heat is real, and there is no escaping it.

7. It goes by extremely quickly, and I’m glad I had a few fleeting opportunities to stop and enjoy the moment — otherwise, it’d be tough to look back on anything! 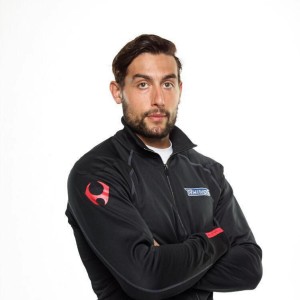 How USA Weightlifting Actually Made Money During the Pandemic