So maybe Caitlin Yuhas’ story ISN’T completely typical. But the lightweight strongman (or is it “strongwoman”? more on that below) competitor believes we’re heading for a new golden age in her sport, and her story showcases just one path from interest newbie to increasingly seasoned competitor. And in a sport with some (at least partially deserved) stereotypes where behemoth competitors get far and away the most coverage, athletes like Caitlin are going a long way to showcase how athletes of all shapes, sizes, and athletic backgrounds can learn and succeed in strongman. 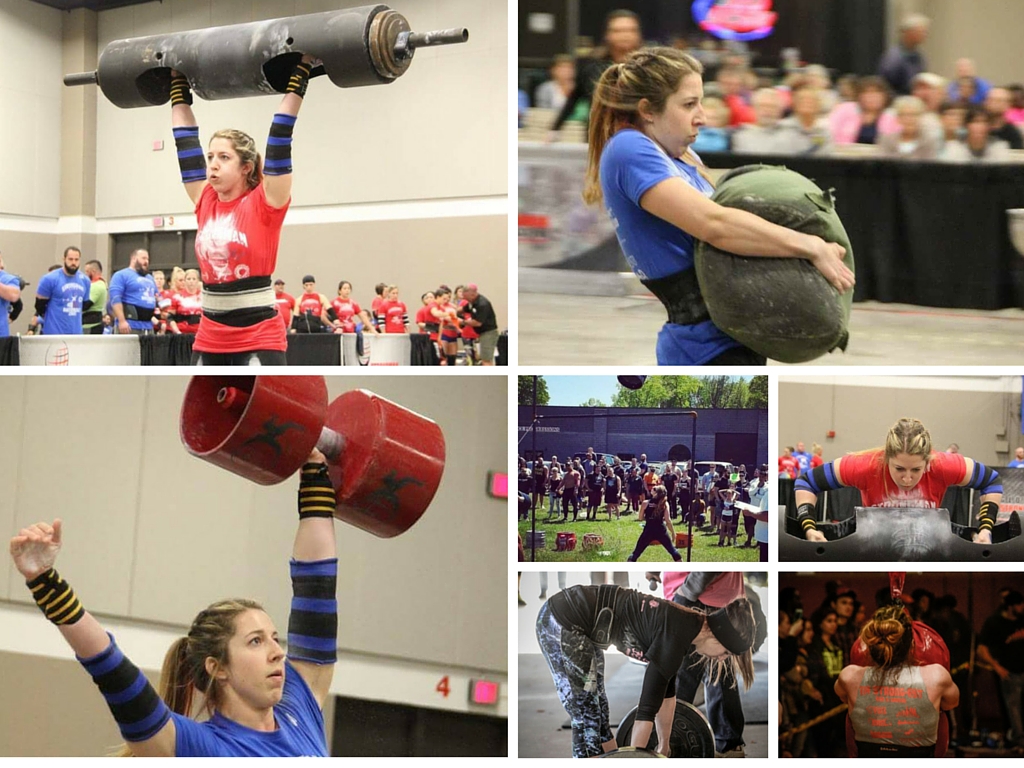 We sat down with Caitlin to discuss the rapid growth in strongman, her training leading up to competitions, and how more people can find and learn the sport she now calls her own (dancing background not required).

1. Tell us a little about your athletic background. How did you end up finding strongman/strongwoman? Is it sexist to refer to it as one or the other?!

Haha, let’s get right to that last question. I can’t speak for my fellow female competitors, but I have no preference between Strongman and Strongwoman. Honestly, I find “Strongman” is more widely recognized in everyday conversation, so that’s usually how I refer to my sport (even though I am quite obviously a strong woman). I’m sure there are those who disagree with me, but isn’t it more fun to focus on the lifting than the semantics?

I grew up in the Midwest and played a few team sports as a kid (basketball, softball, soccer for ten years). I’ve also been dancing since I was a toddler, and still freelance with some companies in New York. Dancing is what originally brought me to the city, in fact — and like many of my peers in that field I turned to the fitness industry for additional income, teaching experience and education. I love movement and anatomy, so it was a natural fit for me — but at this time I had never touched a barbell, never lifted any serious weight (other than bodies onstage, haha).

So there I was, a personal trainer at one of the many Equinox locations in Manhattan, when I got curious about powerlifting (I also had several colleagues tell me I’d be a decent lifter based on my build). I dabbled in that for awhile and really enjoyed the static lifts, but was itching for something a little more dynamic…and then I heard some stories about my fellow trainer Chad Canter (now my coach and one of my best friends) who competed in Strongman. Well, that seemed pretty damn cool to me, so I politely pestered him until he agreed to give me a session. After that first hour, I was HOOKED.

I think we did farmer carries, tire flips and stones…all puny weights compared to what I’m putting up now, but it was glorious. I quickly upped my training from once a week, to twice, to three times a week…hopped into the open lightweight division of my first competition four months later and never looked back.

2. How long have you been competing? Are you competing primarily in strongman now, or do you also compete in other strength sports?

My first competition was April 2014, so it’s been a little over two years and I have about 15 events under my belt. Right now I’m only competing in Strongman specifically, but I’m open to other strength sports. I recently started incorporating Olympic lifts into my training, and I love them! I could definitely see myself competing in that arena at some point. I also teach at an obstacle race-inspired fitness studio in Manhattan, so those events make their way onto my calendar as well.

3. What does your training look like on a weekly basis? How often are you training sport-specific movements and lifts compared to barbell or more “mainstream” strength movements?

Strength-wise, I hit all the major lifts in a given week: deadlifts (sometime deficits, sometimes trap bar), front/back squats, overhead pressing (both barbell and axle or log), and bench press. I also work snatches, overhead squats, and clean & jerk complexes when they’re called for. And yes, our team carves out time for sport-specific events each week, moving implements like farmer carries, yoke, sandbag, etc. and loading events like Atlas stones.

I don’t train every event EVERY week, that would be tough to sustain! Chad and I will craft my event days based on what competition I’m prepping for, or he’ll rotate me through different implements when I’m in off-season mode. It pays to be well-rounded.

4. What role does conditioning play in your sport, and how do you factor that into your training?

Conditioning has been crucial to my growth and success in this sport; at the end of the day, the goal in Strongman is to move the heaviest object the fastest. Yes, we do max effort lifts too, but the bread and butter of our sport is “ABC for reps in a minute” or “move XYZ, fastest time wins.” To prepare for these specific demands, I have a set weekly cardio program (for me, a mix of steady state walks/swims, circuits and interval sprints). Chad also sprinkles timed sets and shortened rest periods into my lifting routine, which makes things pretty spicy.

5. Strongman gets a good bit of coverage as far as the “men” go — there are big names like Hafthor Brjonsson and Eddie Hall you see at big events. In your eyes, what’s the climate of the sport for women, and where do you think it’s headed?

I think it’s a great time to be a strongwoman — from an influx of female-only competitions to pro card opportunities (at last!), there are more and more ways for women to make an impact on the sport. I’m also happy to see that judging and scoring is becoming just as rigorous with the women as it is with the men. I used to see chicks get away with some craaazy things at regional shows (especially on pressing events) because judges were “taking it easy” on them, which is just silly. As for me, even though I’m a lightweight competitor I’m keeping a close eye on our elite middleweight females (specifically the top four from the Arnold this year: Kaitlin Burgess, Dani Schwalbe, Kimberly Lawrance and Liefia Ingalls).

These Amazons are continuously setting the bar higher for me: They’re fast, efficient movers and their strength is insane (just take a look at any of their lift totals, it’s impressive stuff). If I can mold myself into a slightly smaller version of any/all of them, I’ll be very pleased.

6. What are some common misconceptions about the sport?

The whole “huge Neanderthal” thing is a stereotype for a reason (because hello, there are some massive dudes and ladies in this sport! haha)…but on an American level, elite strongmen and women are starting to look and train differently (at least the ones I’ve had the pleasure of meeting). There’s a sinewy-ness to them now, like racehorses…all the same power and strength but without the excess bulk. More efficiency everywhere: in physique, in programming, in performance.

And related to what I mentioned before about conditioning…the whole “I’m a strongman so I don’t do cardio” argument is ridiculous now for anyone who wants to be at the head of the pack. Speed and endurance are as important as brute force. Also, Atlas stones (when loaded correctly) will not hurt your back! Triple extension people, triple extension!

7. Say someone is interested in getting involved with strongman. It doesn’t seem like the most accessible thing, or at least it’s not offered at every gym. What are some resources people can turn to to learn?

There are a lot more Strongman-friendly facilities than people think, actually! It’s pretty cool to see how many spaces expand each year to cater to the athletes (even if it means just purchasing a yoke or a set of farmer handles). Here are a few organizations/websites that I would recommend for those interested in training/competing/learning more about the sport: