The number of federations allowing transgender powerlifters to compete is slowly growing.

The American powerlifting scene is crowded, with more than 20 different federations around the United States and thousands of strength competitions each year. With so many organizations and different policies for each one, it’s tough to keep track of them all. Many federations don’t have a transgender inclusion policy at all, and others have one that isn’t shared publicly. So it’s no surprise many trans athletes are maxed out in frustration before even registering for a meet, let alone putting on a singlet and competing.

So which of these organizations are trans athlete friendly? Check out the list below to see where transgender athletes are welcome and find an event near you.

The ADFPF hosts competitions around the Midwest and Massachusetts and it welcomes all lifters to competition. Their transgender athlete policy was designated by their international affiliate, the World Drug-Free Powerlifting Federation, which in turn is designed to mirror the IOC’s recommendations.

There were a few additions, though:

Note: Any drug testing results will examine the contents of any TUE application. This includes the actual medication and the levels as per the dosage permitted regarding treatment.”

[Learn more: What It’s Like Competing in Powerlifting as a Transgender Male.]

Revolution Powerlifting Syndicate hosts meets along the East Coast and around the Southeast. Their transgender athlete policy states that transgender males (FTM) are allowed to compete only in the men’s division.

A transgender female (MTF) athlete may compete in the men’s or women’s divisions. To qualify for the women’s division, the athlete must be treated with testosterone suppression medication for a minimum of one year prior to competition.

The Amateur Athletic Union is a nationwide organization that hosts many sporting events, including powerlifting meets. They have a transgender athlete policy for all sports which requires an athlete “who wishes to compete as the gender other than that set out on the birth certificate” to apply for an exception.

“The applicant shall provide all medical documents and physician reports, including psychiatric material, which the applicant believes supports the application, to an independent medical expert selected by the AAU.”

The athlete is responsible for all fees and expenses associated with the application, inclusive of the independent medical expert’s fees, and if the decision of the independent medical expert is disputed, the athlete can appeal to The National Board. Any decision of theirs can in turn be appealed to the National Board of Appeals.

365 Strong hosts meets around the Midwest and North Carolina. Transgender athletes can participate in the Untested division.

The USPA is the second biggest federation behind the USAPL and they host meets all over the country. Transgender athletes can participate in the Untested division.

The IATB is a bodybuilding and powerlifting organization in Atlanta GA. They welcome transgender, gender non-conforming, and cisgender athletes to compete. Trans athletes can lift in their confirmed gender category or in the mx division.

Pull for Pride isn’t actually a federation, it’s a charity deadlift event hosted during the month of June in ten cities around the US and one in Canada. This event is non-gendered, with no weigh-ins and no singlets required. Each event raises money for a local LGBTQ+ youth organization.

Several strength sports have inclusive practices like those recommended by the International Olympic Committee or they’ve devised their own policies. More and more transgender athletes can now try to best their PRs in a competitive atmosphere — good luck! 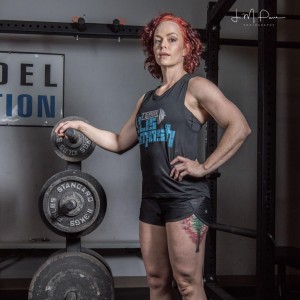 Elisabeth — Lis Smash to her friends and clients — is a writer and strength coach living in Atlanta, GA. In the past Lis wrote for such esteemed publications as the Brandon High School Emblem and Arby's Restaurant Group's internal newsletter, The Dish. Now she writes for her Team Lis Smash website, as well as here at BarBend.Over the last 10 years in Atlanta, Lis taught boot camp, CrossFit, powerlifting, weightlifting and beginner barbell classes. She’s also the founder and former operating partner of two gyms - CrossFit Midtown and East Atlanta Barbell Club. Today, she is a Certified Strength and Conditioning Specialist (CSCS) and leads Team Lis Smash, her strength team, from her home garage gym. Lis also coaches the Fantastic Beasts, Atlanta's LGBTQI+ Powerlifting Club, and the Womxn's Barbell Club. Lis and her team also host lifting benefits for the strength community. Over the past three years, they donated over $25,000 to Lost-n-Found Youth, Planned Parenthood Southeast Advocates, the Southern Poverty Law Center, and City of Refuge. Lis competes in powerlifting in the 67.5, 72 and 75 kilogram weight classes. She holds Georgia-state squat records in both the USAPL and USPA. She won a bronze medal at the 2019 USPA Drug Tested Nationals in the 75 kg Submaster class. She also placed 8th in the 72kg Open class at 2013 USAPL Raw Nationals. When she’s not working or training in her garage gym, Lis enjoys doing yard work, drinking coffee and basking in the sunshine with her 14-year-old rescue dog Cady.