The final day of the USA Weightlifting (USAW) National Championships ended with a lot of big lifts from the strongest athletes in American Weightlifting. Olympic Medalist Sarah Robles posted her highest competition total since last year’s Olympic Games, and Caine Wilkes won his fifth title in a row. Colin Burns of Team Juggernaut and Mattie Rogers of Florida Elite were named the best male and female lifters, respectively, of the competition. East Coast Gold won the men’s team championship, while Florida Elite was victorious on the woman’s side.

In addition, this weekend was the last qualifying event towards the 2017 Pan American Championship team. USAW is expected to announce the final twelve men and woman who are eligible for the team this week. Eight men and women will technically be on the Pan American team; along with a minimum of 4 alternates, and they will be ranked based on their ability to place and score team points. Three weeks prior to the competition, the final 8 team members and 2 alternates will be chosen by the Team Selection Committee. This committee will consist of USAW Technical Director Pyrros Dimas, along with Executive Director of Sport Lance Williams, Athlete Rep Allie Henry, and Senior International Coach Leo Totten.

My (unofficial) ranking of the top 12 men and women is found below. 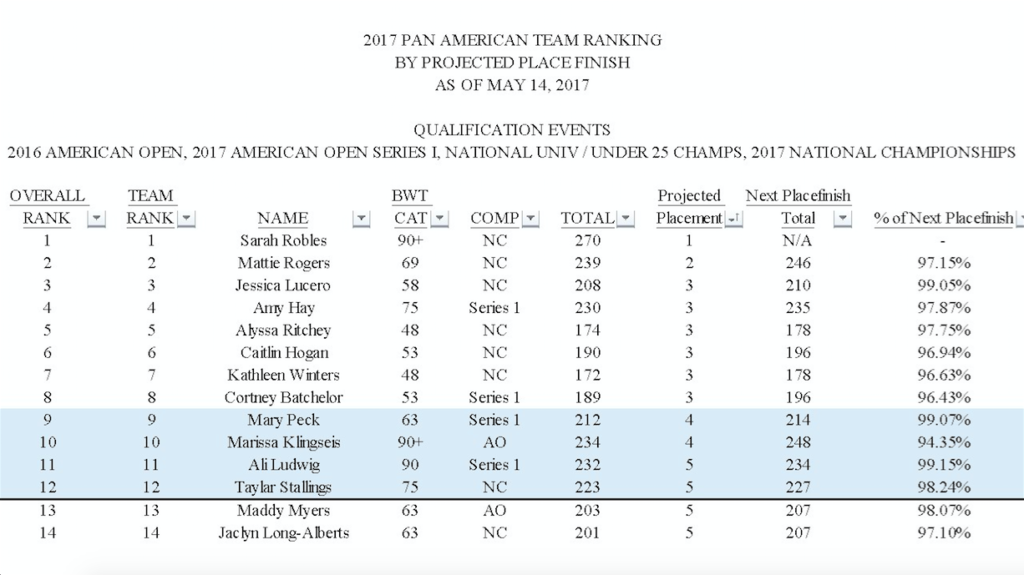 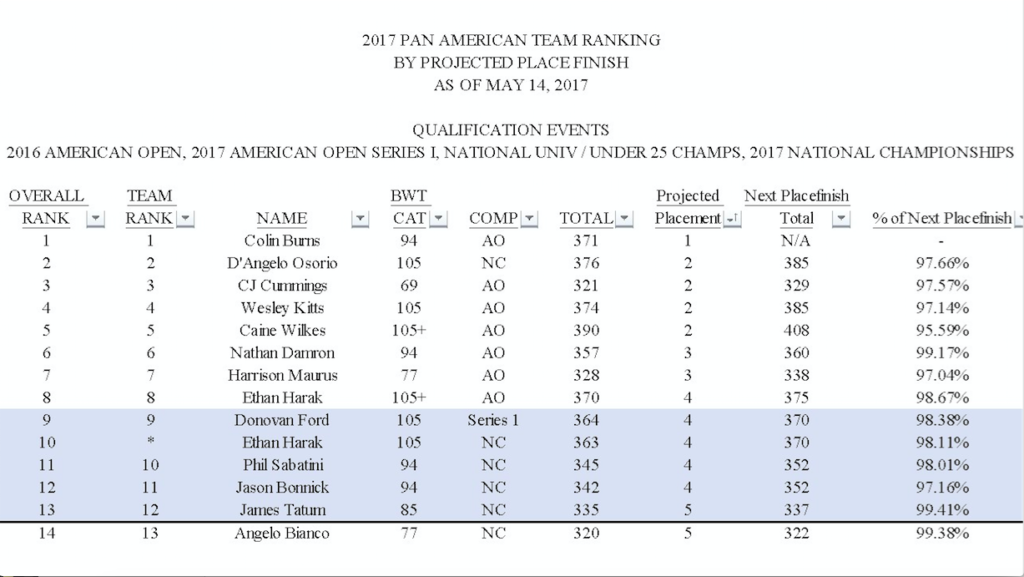 Results from the entire weekend of lifting can be found here.

In one of the most anticipated matchups of the weekend, this weight class came down to a battle of the ages between 2012 National Champion Ian Wilson, D’Angelo Osorio, and Ethan Harak. The snatch portion saw Wilson lift 165KG on his 2nd attempt to win the gold medal in the lift based on tie breaking criteria over Osorio who matched that on his 3rd attempt. In the clean & jerk, Osorio pulled away with a 211KG lift that leaves him within 10KG of the American Record in the lift that was set in 1999 by Olympian Wes Barnett. Harak finished with 200KG in the lift to edge out Wilson who made his opening attempt of 195KG. D’Angelo Osorio won his first National Championship with a 376KG total and looks to be on Team USA for the Pan American Championships. Harak won the overall silver medal with a 363KG total, and Wilson won the overall bronze with a 360KG total.

Caine Wilkes of Little League Weightlifting won his fifth straight National Championship after he totaled 387KG. After taking some time off in the middle of 2016, Wilkes is working his way back into top form just at the right time. He finished the day with lifts of 169KG in the snatch and 218KG in the clean & jerk. California Strength picked up a pair of medals in the overall competition as teammates Jason Starks and Jacob Pudenz won silver and bronze medals overall, respectively. Starts totaled 340KG to Pudenz’s 331KG total. Javier Pagliery of Florida Elite won a silver medal in the clean and jerk with 185KG which he made on his opening attempt.

Taylar Stallings of Florida Elite won her first National Championship with lifts of 103KG in the snatch and 120KG in the clean & jerk for a 223KG total. The overall silver medal was won by Shacasia Johnson with a 216KG total, she narrowly edged out Quiana Welch who was close behind with a 214KG total. Paige Scott of Lift for Life Gym also totaled 214KG, however she finished in 4th place based on tie breaking procedures.

Alexandria Ludwig of Waxman’s Gym won her first National Championship with lifts of 102KG in the snatch and 124KG in the clean & jerk for a 226KG total. She joined teammate Caitlin Hogan as being the 2nd National Champion this weekend to come out of the Southern California training facility. The overall silver medal was won by Caitlin Lucas of Coffee’s Gym with a 213KG total, she narrowly edged out Samantha Kleinschmidt of Catalyst Athletics, who was close behind with a 212KG total.

Sarah Robles of Team Houston also won her 5th National Championship, and first since 2012, with a 270KG total. Her lifts of 120KG in the snatch and 150KG in the clean & jerk have her within striking distance of the American Records that were set over a decade ago by another Olympic Medalist, Cheryl Haworth. The overall silver medal was won by Shannon Beasley with a 215KG total, she narrowly edged out Emily Malinowski, who was close behind with a 214KG total. Tiffany Vu also totaled 214KG, however she finished in 4th place based on tie breaking procedures.