How USA Weightlifting’s Men Can Qualify for the Olympics: An Explainer

If you thought it was difficult to watch the Woman’s Olympic Trials Sunday night and keep track of who was on the team and who was not, your work isn’t done yet: We’ve still got the men to deal with. Allow me to walk you through the process that will decide which men (if any) will represent the USA in Weightlifting this summer at the Olympic Games.

What Happened Before Salt Lake City?

Based on finishing 27th place as a team in points scored between the 2014 & 2015 World Championships, America did not earn any Olympic spots for men in the Olympic Games. HOWEVER, 6 months after the 2015 World Championships, the International Weightlifting Federation (IWF) has not announced their final actions with regards to over 20 adverse analytical findings of over 200 drug tests that were executed. When an athlete is drug tested, there are two urine samples collected for analysis (A & B). Over 20 of the A samples came back as positive for a banned substance. The athlete had the right to protest and have the B sample tested to either clear their name, or verify the result. 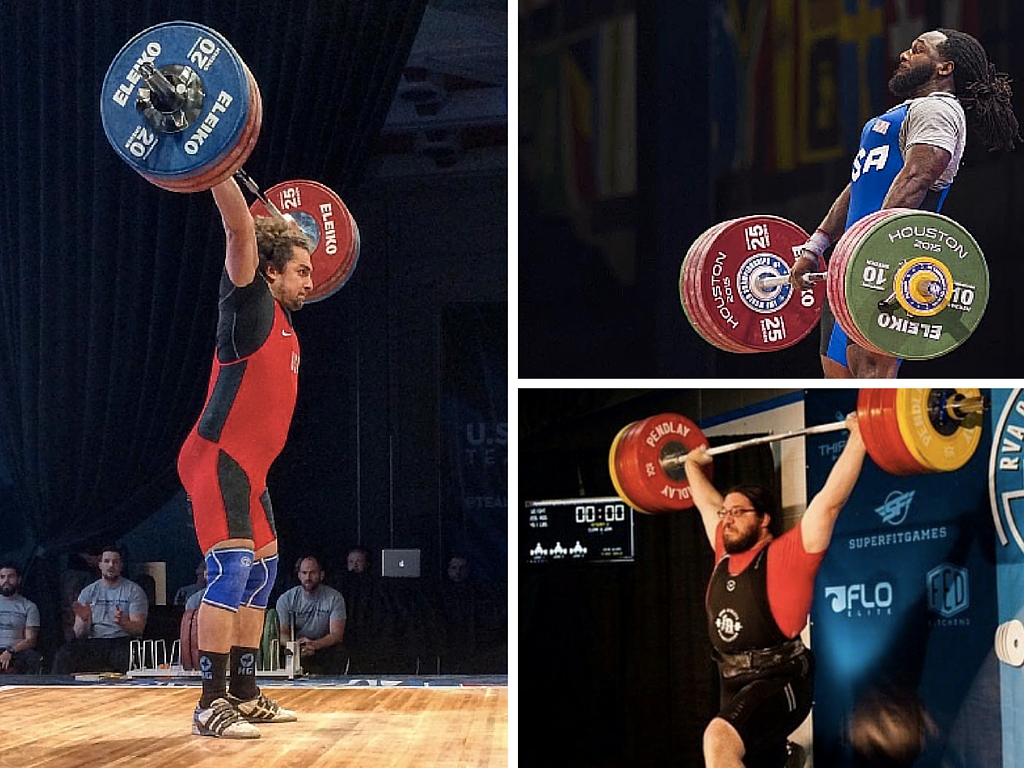 When an athlete fails a drug test, they lose their results, and their country will lose their team points. As an example, Kendrick Farris placed 16th after the 2015 World Championships, however there have been 5 athletes who finished ahead of him who have tested positive on their A sample. If those 5 athletes have their results removed, Farris would then move into 11th place and the USA would score 5 additional points. The countries of those athletes would lose their points, and the overall rankings can change. When the IWF announces their final ruling, it is possible that the USA and other countries will be awarded Olympic spots.

In January of this year, USAW published their selection procedures for the 2016 Olympic Games. Since the men did not earn any spots, the selection procedures read as a giant hypothetical story – “If this happens then USAW will do that,”and so on and so on. What you need to know is there are 3 Paths that an American male athlete potentially can use to meet criteria to place them on the Olympic team, based on what happens with potential Olympic spots:

The ranking methodology is based on ability to medal (i.e. place 3rd or higher). Each athlete’s total was ranked as a percentage of the 5 year average of 3rd place. The events in the qualifying period included:

This ranking is different than the ranking for the 2016 Pan American Team — which ranks athletes on their ability to score points. This is only about the ability to medal, based on a comparison vs the third place average. The below chart shows the top 6 ranked American men based on Ability to Medal with totals from the qualification period.

As of this writing, the predominant way that USA Weightlifting (USAW) will receive 1 Olympic spot is at Pan Ams, and that’s by placing in the top 7 teams that do not already have an Olympic spot. In the Pan American Weightlifting Federation (PAWF), Brazil and Colombia are the only countries that already have Olympic Spots. Brazilian and Colombian athletes will compete, however their points will not count.

As an example, at the 2015 Pan Am Games, Brazilian Fernando Reis was the champion at 105+KG with a 427KG total. This past weekend Caine Wilkes totaled 404KG, and if they were to finish 1st and 2nd place in the competition, Wilkes would be awarded 1st place points for overall finishing 2nd.

This will not be an easy task, as many countries that are traditionally dominant in international weightlifting are also aiming for 1 Olympic spot. This includes Ecuador, Canada, Cuba, Mexico, and Venezuela. If USA does earn one Olympic spot through Continental Qualification, it will go to the athlete who scores the most team points for Team USA. The team that is going to Colombia next month includes:

On paper, the favorites to maximize team points would be Farris and Vardanian, who respectively earned Gold and Silver Medals at the 2015 Pan Am Games. However, without knowing the start list for all countries, it is safe to say that anything can happen and all 8 men will need to make lifts in order to secure one Olympic spot for the U.S.

What If the IWF Awards USA Olympic Spots BEFORE the Pan Am Championships?

The IWF is expected to announce any changes to the team standings based on final drug test results by June 20th, which is the end of all Continental Qualification Events. Based on preliminary reporting of drug testing by the IWF, it is expected that Japan will be the only country to jump from having no Olympic Spots to having three through the World Championships, and the USA would have the most team points of any country without Olympic spots.

Another caveat is that Romania has earned 3 Olympic Spots, however due to multiple doping violations, they were penalized one spot. The IWF has announced that this Romanian spot would be awarded to the next best ranked country, which is expected to be USA. While unlikely, it is also possible that more positive drug tests could be announced and USA could move up high enough to earn 3 Olympic spots from the World Championships. Team USA earning any more than 3 Olympic spots is significantly unlikely based on current standings.

Also, my assumption is that if Team USA receives Olympic spots before the Pan Am Championships, they would be ineligible to earn one more spot in the competition. However, in my observations, nothing is definitive with the IWF until it happens, so we would have to wait and see.

If Team USA Receives Spots Before the Pan Ams, Who Are the Olympians?

If this scenario plays out, the men’s team would be decided the same way as the women’s team was. The first spot would be awarded to Caine Wilkes, since he scored the most team points at the 2014 & 2015 World Championships. If a 2nd or 3rd spot is secured, those would be awarded based on Ability to Medal. Based on totals from the qualification period, those athletes are Kendrick Farris and Alex Lee.

In a crazy scenario where USAW received over 3 Olympic Spots, this would be the road map: 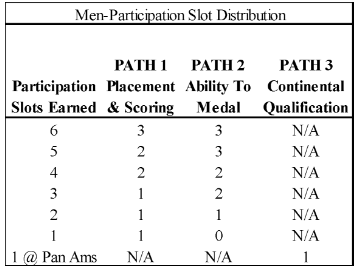 Path 1 spots would have priority and be filled first, followed by Path 2 spots.

What If the IWF Awards USA Olympic Spots AFTER Pan Ams?

What Is the Most Likely Scenario?

The most likely scenario is that Team USA will earn 1 Olympic spot, and that will come through PATH 3, the continental qualification at the Pan American Championships. By waiting until as close to the Olympics as possible, the IWF can redistribute any unused Olympic Spots to maximize the amount of countries that are represented in weightlifting. Best of luck to the men and women  going to Colombia to represent Team USA.