There are so many protein bars on the market these days, that it’s nearly impossible to keep them all straight. It takes something snazzy to catch our eye, so when colorfully packaged and meat filled Wilde Boldr bars landed on our desk, we were eager to try them out.

After all, who doesn’t need more portable meat in their life? 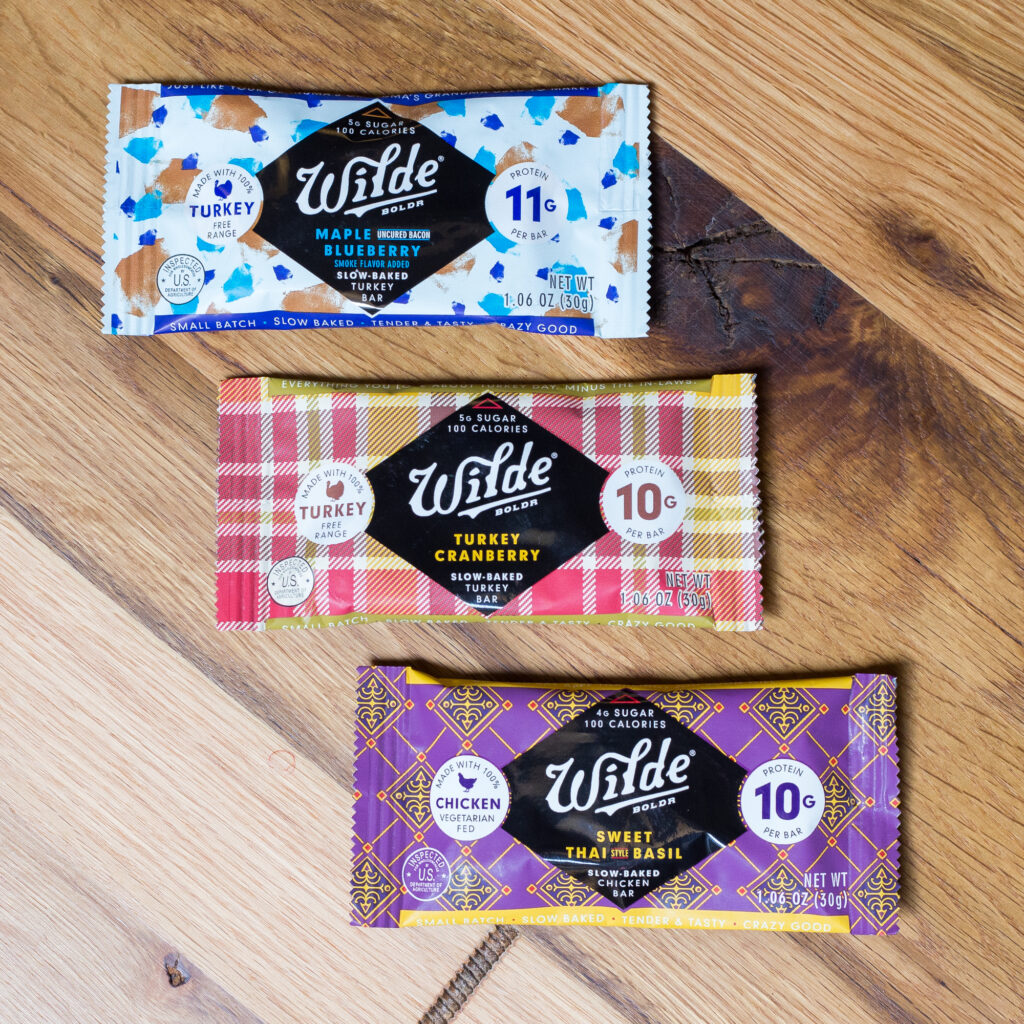 According to their website, Wilde Boldr bars are the first ever humanely raised, low sugar, slow baked meat snack that redefines the traditional idea of a protein bar. Our two testers (and full-time nerds David Tao and Brooke Siem) tried out the goodies during an afternoon snack break. Their qualifications include a culinary degree (Brooke) and deep love of all things in bar or block form, particularly cheese (Tao).

Up first is the Turkey Cranberry…

Tao: It’s good! It’s not too sweet. Reminds me of summer sausage.

Brooke: It reminds me of Thanksgiving stuffing.

Tao: When you first bite into it, it starts out dry, but it moistens up a little bit.

Brooke: The texture is a little bit like a sausage patty that has been left out for two days. It’s not that the texture is inherently bad, it’s just that it’s unexpected because it’s meat flavored, but it’s not a meat texture. It’s not like jerky. 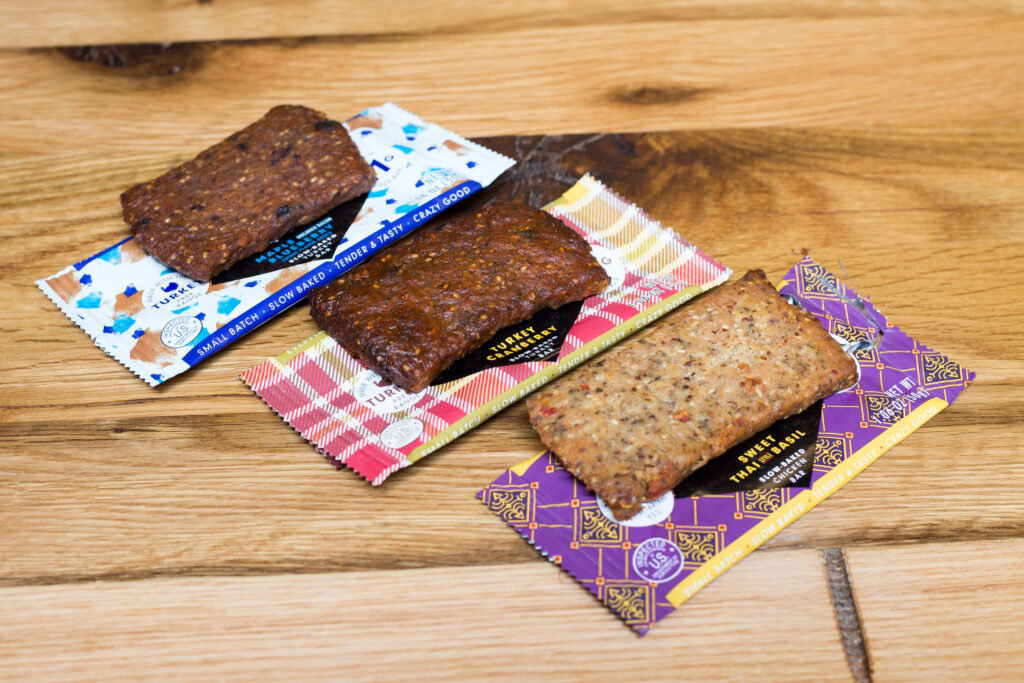 …moving onto the Thai Basil…

Tao: Hmm, this is the best texture out of all of them. This is the texture I expected from a “meat bar.” Flavor profile isn’t my cup of tea.

Brooke: I don’t like the texture of this one, it’s too grainy for me, like it was baked longer than the others. There’s something off about the blueberry/bacon flavor combo. I think it’s the texture and size of the dried blueberries, but I like the chunks of bacon.

Brooke: Yep. The amount of protein is great though. It’s the perfect snack size for us littler people. 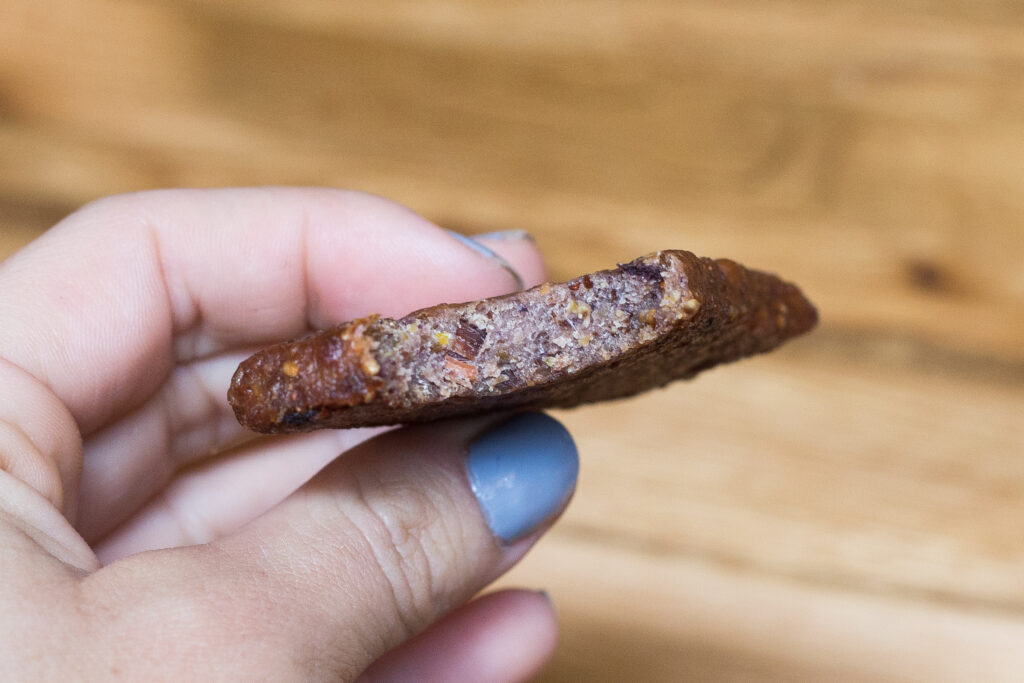 Overall, our biggest issue is that Wilde Boldr boasts their bars as low in sugar, with 3-5 g of listed sugar per bar. The problem is that the FDA only requires that sucrose is listed as “sugar” on ingredient labels. Ingredients like date paste (glucose and fructose) and rice syrup (dextrose) aren’t always included in the total sugar count, and are instead considered “added sugars” and lumped in with the total carbohydrates. Both date paste and rice syrup solids are used in Wilde Boldr bars, so it’s probably more accurate assume there is closer to 7g/sugar per bar (or at least more than the listed 3-5).

At 10g of protein, 8-10g of carbs (depending on flavor), 2.5g of fat, and 100 calories per bar, Wilde Boldr bars fit in well to many a macro based diet. They’re not technically paleo, but the paleo-ish in the world would likely give them a pass.

Flavor wise, Wilde Boldr bars are pretty good overall. Texture wise, it’s a love it or hate it kind of thing. If you’re averse to meat things in bar from, these aren’t for you, but if you’re a fan of Epic Bars and Warrior Bars, you’ll probably like Wilde Bouldr bars too.

Have to tried Wilde Boldr Bars? If so, let us know your thoughts!