Most of us have embarked upon the squatting journey in one way or another, either through the competitive nature of powerlifting, athletics, or general fitness. Have you ever wondered what it must feel like to squat 3 TIMES YOUR BODYWEIGHT? Well, I have.

Note that low bar squatting, distinctly different than high bar squats often seen in weightlifting programs, is the squat of choice among most powerlifters, primarily due to the increased ability to squat heavier, often due to increase hip flexion with less knee flexion. Unlike high bar squatting, which uses a high bar placement that places emphasis more on the hips and quads due to a more vertical torso angle, the low bar squat’s bar placement allows for a lifter to load the hips, hamstrings, and erectors to a greater degree. 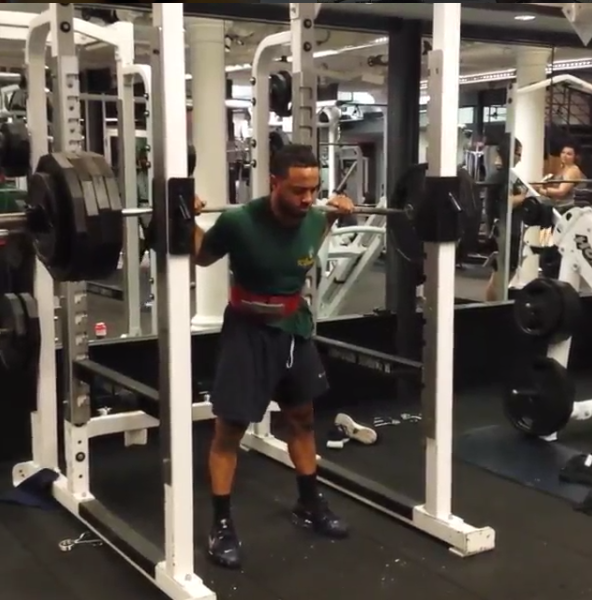 Research has shown that a strong squat can increase:

Often, the idea of squatting more comes to mind (both frequency and volume) when trying to determine a solution to lackluster squat results. However, while volume (sets x reps) is key to muscular strength and mass development, we must also look outside the box for other viable options.

Instability, immobility, and poor neuromuscular adaptations caused by near maximal loading attempts in most lifts are seen in lifters that have little experience when handling near maximal loads. Nick De Freitas, assistant college strength coach, ex-wrestler, weightlifter, and powerlifter, sat down with me to share his top three assistance exercises that helped him squat 485lbs at a bodyweight of 161lbs (that’s over 3 times bodyweight).

This single-handedly built Nick’s back squat, and it continues to drive his personal bests higher. Being able to overload your central nervous system during squat walk outs allows you to stress and adapt to the spinal loading via increased compression. Additionally, through overloading the squat in the walk out, you are forced to create maximal tension in the upper half of the body to maximize an efficient “shelf position” in the low bar squat. Due to the increased amount of loading that can be withstood during squat walk outs in relation to squats, once or twice per week could be just the right amount to perform these. Load the bar with supramaximal loads after you have practiced and established control with lighter ones, and brace for time.

The Turkish get up provides immense benefits for heavy lifters, especially squatters. Strong, stable shoulder complexes, which are extremely engaged throughout maximal squatting attempts in a low bar position, allow lifters to train stability and mobility unilaterally. The added benefit of hip mobility trained under load provides strength athletes with a viable solution to hip pain and stiffness. These are great exercises to build into accessory training, warm ups, or even active recovery days to increase overall athleticism and injury resilience in joints. The key is to create tension, stability, and fluid movements under load.

Targeted thoracic strengthening exercises, like this weighted back extension/GHD variation, can help lifters promote greater tension while in the “shelf” position in the squat. The targeted approach to strengthening an aspect of the squat that often breaks down when the hips begin to increase in flexion during the squat, allows lifters a unique solution to strengthen both the thoracic and hip extensors together. Adding this accessory exercise could be included into a training program in warm-ups, after main lifts, or even active recovery days.

These are just three useful assistance exercises that you can experiment with to increase your squat. It is important to note that although these are more advanced training exercises, all lifters need to continue to squat throughout their journey to improve the skill and strength required to move monumental loads.