5 Strength and Positioning Exercises to Improve the First Pull

Snatches and cleans are complex movements, ones that require coaches and athletes to have a thorough understanding of the individual components of each movement; and how one tiny fault can lead to missed reps and a slew of potentially unwanted compensatory behaviors. The goal of the first pull in both the snatch and clean is to generate enough force to overcome a resting weight, while maintaining balance and mechanics to allow for drastic barbell acceleration in the second pull. Failure to perform the first pull effectively can result in missed repetitions, poor compensation patterning during the second and third pulls, and long-term detrimental technical behaviors. 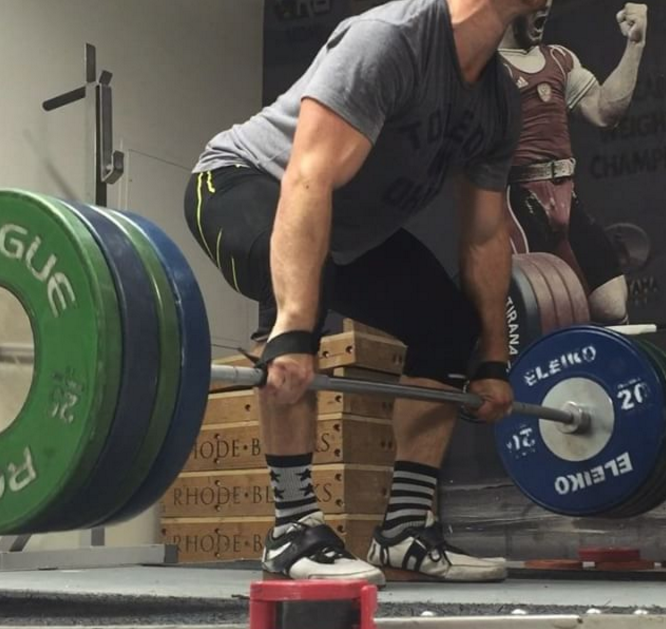 In this article, we will briefly describe the first pull (briefly, as the concepts between the first pull of the snatch and clean are similar, although not identical), common faults, and what exercises can be used to improve strength and positioning in this initial phase of a weightlifting lift.

Generally speaking, the goal of the first pull (in both the snatch and clean) is to allow for smooth barbell pattering from the floor to above the knee. During the first pull, the barbell should come back slightly into the body, never straight upwards and/or projecting out. The shoulders should remain over the barbell (or directly above, never behind) to allow the back/torso angle to rise at a constant rate (hips and shoulders rise together). By doing so, the barbell starts its’ inward path towards the second pull, while not making contact with the shins/knees, as any additonal friction will affect bar speed and positioning.

Take a look at the quick tutorial below to gain further understanding of the basic concepts of the first pull (in this video, the clean).

Poor mechanics in the first pull can cause a magnitude of faults, however below are some of the most common:

Although the above faults are not inherent to poor first pulls (as most faults are caused by a chain of poor behaviors), gaining an understanding of proper first pull mechanics may help a lifter remain in control going into the second and third pull of a lift.

Assistance Exercises for the First Pull

The exercises below can be implemented for both snatch and clean grip pulls. Loading should be kept between 70-100% max, as too light and too heavy of loads may affect a lifter’s mechanics during the lifts. For all lifts below, maximal tension and control should be exhibited by the lifter, as these exercises are to improve awareness, positional strength, and have direct carry over to the formal Olympic lifts. Any deviations off of normal set-up, joint angles, and pulling mechanics will diminished the intended sport-specific (snatches and cleans) adaptations.

The Anderson/Pin squat is a great exercise (both from back and front squat versions) to develop concentric strength and leg drive. In the event a lifter has poor leg drive in the first pull, their hips tend to rise to shift more weight to the hamstrings and hips, leading to forward trajectory, early pulling on the barbell, and missed lifts. By using Anderson Squat variations, lifters can increase concentric strength and leg drive due to minimal involvement in the strength-shortening cycle, ultimately increasing ones ability to stay in control throughout the first pull.

Floating pulls are great snatch and clean pull variations to challenge a lifter’s balance and bar patterning throughout the first pull. Lifters can choose their “floating depth”, often an inch or two off the floor. Performing these off risers (see 3#) can also add an increased range of motion and challenge leg drive strength and explosiveness due to the increased knee joint flexion.

Riser pulls, also know as deficit pulls, add increased range of motion to the common snatch and clean pull. The added range of motion increases knee joint flexion, placing more emphasis on the drive and quad strength Additionally, these pulls challenge a lifter’s ability to maintain correct aligment and raising of the hips and shoulders equally throughout the first pull.

Segment/pause pulls allow coaches and athlets to challenge bar patterining, position strength, and leg drive throughout the individual phases of the snatch and clean pulls (first, second, and third pulls AND the transitions). The individual pauses allow lifters to increase awareness and isometric strength and stability, both critical when developing a smooth bar pattern throughout the pull.

Similiar to Anderson/Pin Squats, pause squats (both front, back, and overhead) variations offer coaches and athletes the ability to challenge leg drive strength. By achieving pause repetitions, we negate the involvement of the stretch-shortening cycle, increasing the demand for concentric/starting strength. Increased concentric strength and explosiveness will allow a lifter to seperate the barbell under control more effectively when breaking the barbell from the floor in the first pull.

The above exercises can be used to help coaches and athletes better pin-point specific weakeness regarding the first pull of the snatch and clean. Coaches and athletes should first determine the faults, correct technique and bad habits, and then address stengthening barbell patterning to effectively bring about positive adptations.