Almost But Not Quite: The Ill-Fated Life & Career of Serge Reding

When we talk about history’s best weightlifters, the same names tend to pop up. Vasily Alekseyev, Norb Schemansky, Yury Vlasov — these guys are the pioneers of modern day weightlifting. They all set multiple world and Olympic records, competed during a time of major political strife, and pretty much made it possible for you and I to lift weights in a garage gym half a century later. These guys all have one other thing in common too: they all beat Belgian weightlifter Serge Reding. 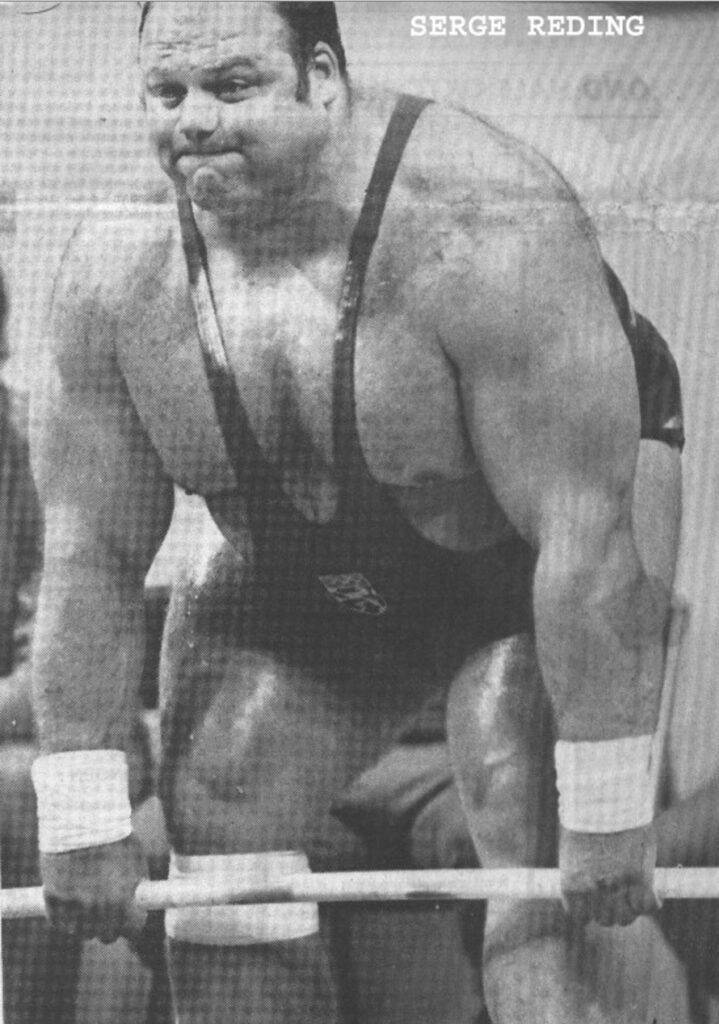 Serge Reding was the constant bridesmaid (groomsman, rather) of the 60s and 70s weightlifting world. He had all the goods to make it to the very top, including a 400+lb snatch, 500lb clean and jerk, and a 502lb press. (He was actually the first person in history to snatch over 400 pounds, setting a World Record with 182.5 kilograms.) Reding also front squatted 617lbs, back squatted 705lbs, and deadlifted 771lbs (even though he never trained it). These are numbers of someone who should have been an Olympic champion and a multiple time World champion in that era, yet when it came down to game time, Reding often choked.

Had Reding simply competed at the top of his game and still never cracked the top spot, perhaps his fifteen year career wouldn’t have felt so disappointing. Reding, though, just had the worst luck.

Many will argue that Alekseyev’s lift should never have counted due to the obvious knee bend during his press, but the judges gave it the a-ok and the record held. Not only did he lose the record, but the lift aggravated an old injury and Reding withdrew from the rest of the competition. Too bad for Serge.

Just a month and a half later, Alekseyev and Reding met again for a head to head match set up in Reding’s hometown of Brussels. Reding was looking forward to besting Alekseyev after losing the World Championships, but Alekseyev showed up ill and only pressed 308lbs. Reding tried to beat Alekseyev’s world records anyway, and still fell slightly short.

Going into the 1972 Olympics, Serge was in fantastic shape but again, the stars did not align in his favor. Serge was slated to compete just one day after the Munich Massacre, the terrorist attack that killed multiple Israeli weightlifters. A deeply sensitive person, Reding was understandably very shaken up by the attack. During his final lift of warmup before the competition began, Reding was warming up a 463 press without collars when one of the 25kg plates fell off the right side his barbell, causing the uneven load to tweak his left wrist. Serge had no time to see a doctor before the competition started, so he tried to lift anyway but could barely manage a 495lb clean and was forced to withdraw from his final Olympics.

That’s why you always use collars, kiddos.

After placing second in the 1974 World Championships in Manila, Phillipines, Reding reportedly met and fell in love with a Filipino waitress. One year later, he died in Manila at the age of 34, under mysterious circumstances. Some think he died of a heart attack, others think suicide or foul play was involved. Regardless, Reding never had a chance to lift to his full potential and remains one of the greatest “what ifs” in weightlifting history.

Note: This article has been updated to reflect that, among his other accomplishments, Reding was the first person to snatch over 400 pounds in competition.