Body Fortress’ products are manufactured in upstate New York and they sell a variety of inexpensive workout supplements like amino acids, fat burners, preworkouts, and four kinds of protein powder.

Today, we’re taking a look at their creatine HCl, which stands for creatine hydrochloride.

There are just three ingredients per scoop, here: creatine hydrochloride (750mg), sucralose (also called Splenda®), and natural flavors. While there are no artificial colors or flavors, Splenda is an artificial sweetener. However there is no acesulfame potassium, another very common artificial sweetener that some people try to steer clear of.

Creatine HCl is made by attaching creatine molecules to parts of hydrochloride molecules, which lowers its pH. This means it dissolves a lot more easily in fluid, but more importantly for some consumers it means that it’s less likely to cause digestive discomfort. Creatine can cause cramps for a lot of folks and creatine HCl has a solid reputation for reducing this discomfort.

But some people prefer creatine HCl for other reasons. There’s a theory that this kind of creatine is absorbed more effectively in the stomach — perhaps because of its solubility, perhaps because of its lower pH. This means, the theory goes, that more creatine is absorbed by the body, so we only need to consume a small amount of creatine HCl: 1.5 grams for a 200lb person as opposed to the 5 grams typically recommended for creatine monohydrate.

Unfortunately, there’s not a ton of data to support this theory. One study did show more creatine in test subjects’ plasma when they consumed creatine HCl versus creatine monohydrate, but this could mean that it’s less effective, since more creatine may be ending up in the plasma than the muscles.

That’s not to say that it’s definitely less effective than the standard kind, rather that there’s not enough data to make a firm statement, here.

Two scoops of Lemon Lime flavor in 1.5 cups of water was pretty darn tasty, like old fashioned lemonade. It was a pretty strong flavor, though — some people may prefer to mix it with at least 2 cups.

This could be a great option for people who experience cramps when they consume creatine monohydrate — it’s likely a better value than some other creatine hydrochloride brands. It’s also made in a Good Manufacturing Practices-certified facility, which means there’s a relatively high degree of quality control and purity.

That said, there’s not really enough data to say that you only need 1.5 grams to produce the effect of a larger dose of creatine monohydrate. 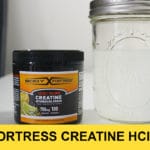