Learn about the exercises world class gymnasts use to train their core.

There are a lot of ways to train your core with a lot of the industry’s top coaches giving their input. The type of core training any given athlete decides to incorporate into their training can change based on how they intend to compete, but there is no doubt that training your core is vital to improving as an athlete.

The BarBend team is indisputably made up of some of the finest athletes around, after all we compete in some pretty high stakes challenges (ha). We need to ensure our cores are competition ready. So we invited Jaime Da Silva, a world class gymnast and member of the Puerto Rican National Gymnastics Team, to show us which core exercises elite gymnasts use in training.

You may be familiar with some of these moves, but Da Silva offers several important form critiques for each exercise to improve how effective they can be in practice. The following is a breakdown of each exercise and the key tips to keep in mind when adding them to your routine. 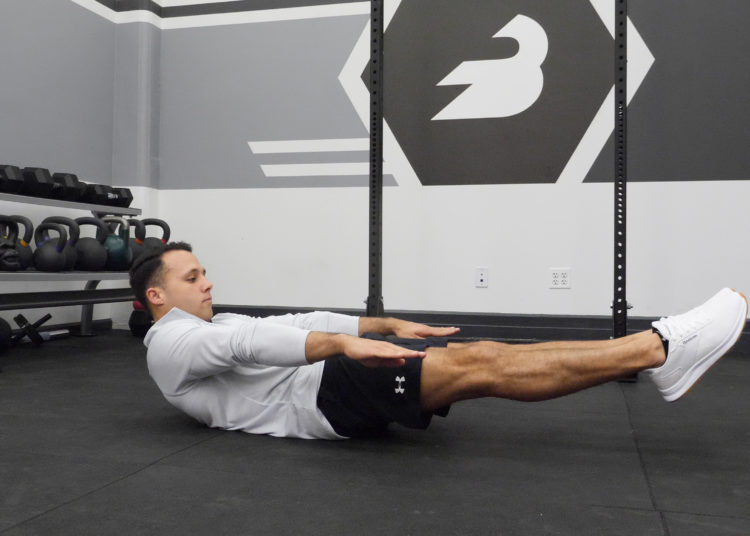 The hollow body hold is a static hold in a pike position on the floor. To maneuver into the proper position, follow these steps:

Your chin should stay tucked into your chest and your feet should not hover too much higher than your eye-line. The only part of your body that should be touching the floor is your lower back. If this is too difficult, raise your feet higher to make it easier. If you really need to, you can add a slight bend in the knees to lower the difficulty as well.

Try sustaining each hold for ten seconds to a minute depending on how advanced you are. Da Silva recommended two to three sets, but feel free to adjust as needed based on how long you’re able maintain each hold. 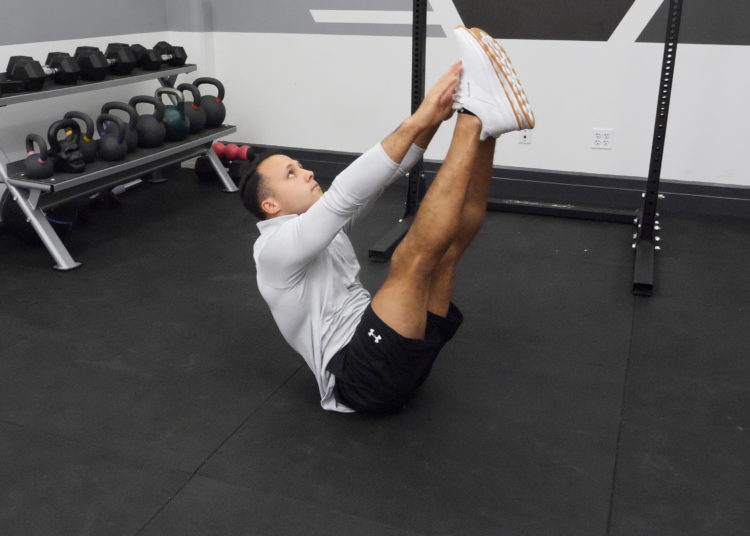 To perform a proper V-Up, start by laying flat on the floor with your feet together and your arms extended so your biceps are next to your ears. From there, while maintaining your lower back against the floor, bring your feet and hands up so they meet in the air above your pelvis. You can see from the photo above that the only time your lower back leaves the floor is as you reach the top of the movement. Then lower back down to the starting position; that is one full rep.

If you’re a bit more advanced, try lowering your legs and arms as far as possible without touching the floor. This will keep the tension on your core constant throughout the entire set. You can also add static holds to the top or bottom of the V-Up to increase the difficulty. 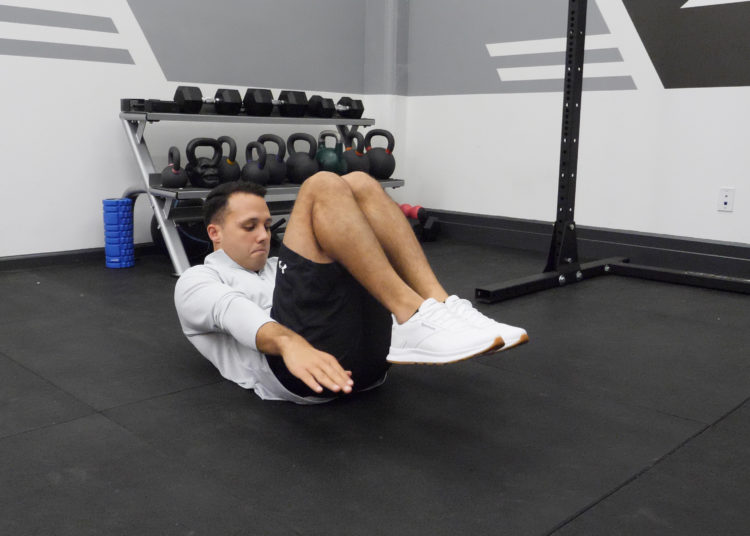 If V-Ups prove too difficult or if your hamstrings are too tight to properly reach the top of the movement, knee-ups are fine alternative to work your way up.

To perform a knee-up, follow the same form as a V-Up, but instead of touching your hands to your feet at the top, bring your knees towards your chest and meet them with your elbows. Then extend back to the starting position.

As you improve, try keeping your arms straight during knee-ups and touching your toes with your fingertips. Try to extend your legs more and more as you progress until you are able to do proper V-Ups.

Aim for two to three sets of ten reps. Add in static holds as you see fit to help build better balance and prevent relying on momentum.

The hollow rock is exactly what it sounds like. Assume the hollow hold position, but instead of maintaining a static hold, start rocking back and forth. It is worth noting that the rocking motion is forward and back, not side to side.

Aim for two to three sets of ten reps. Although the movement is fluid, remember that one full rep is constituted by rocking all the way forward and returning to the starting position. 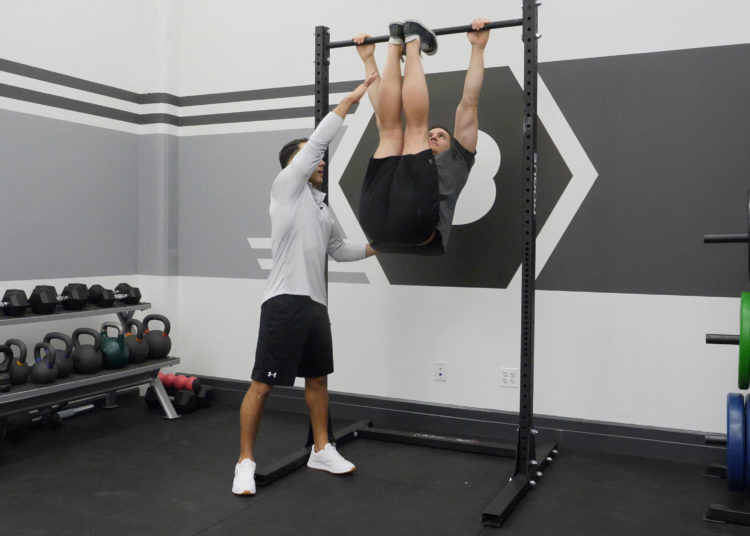 To do a leg lift, start in a dead hang on a bar. Without swinging, raise your straight legs up until your toes touch the bar. In a controlled manor, lower your legs back to the starting position. That’s one rep.

Your core should remain engaged throughout the entire movement. A tell that your core has disengaged is if you feel your back move into a slight anterior tilt. Your core is not the only thing that should be engaged during this exercise. Your shoulders should also be down and back the entire time. If your lats disengage, you’ll know it when shoulders are closer to your ears than your chest when hanging. 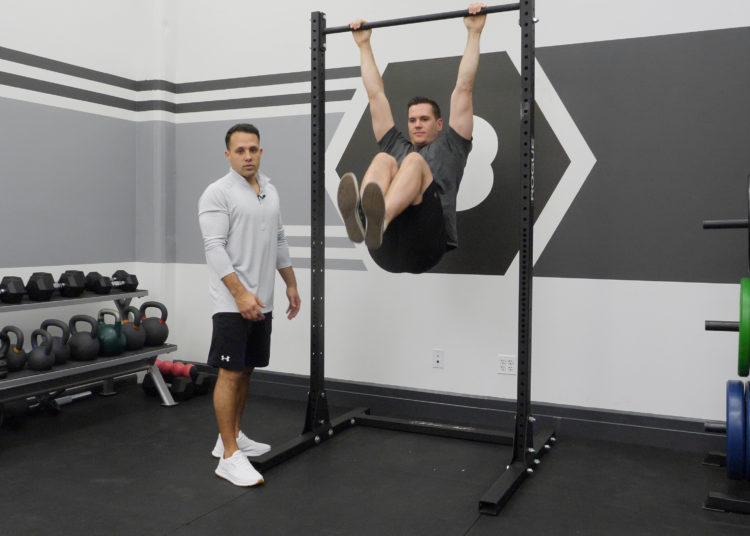 Leg lifts are likely to be tough for beginners, so knees to chest is the go-to alternative. For these, rather than raising your toes to the bar, instead bring your knees up to your chest. Your form should be the same with knees to chest as it would be with regular leg lifts; slow and controlled movement while properly engaging your shoulders and core.

Just as with V-Ups, knees to chest is a useful variant for athletes who have hamstrings that are too tight to perform leg lifts properly.

Again aim for two to three sets of ten to fifteen reps based on your ability. If the leg lifts become too difficult to complete the latter reps, Da Silva suggested switching to knees to chest reps to finish the set rather than stopping. 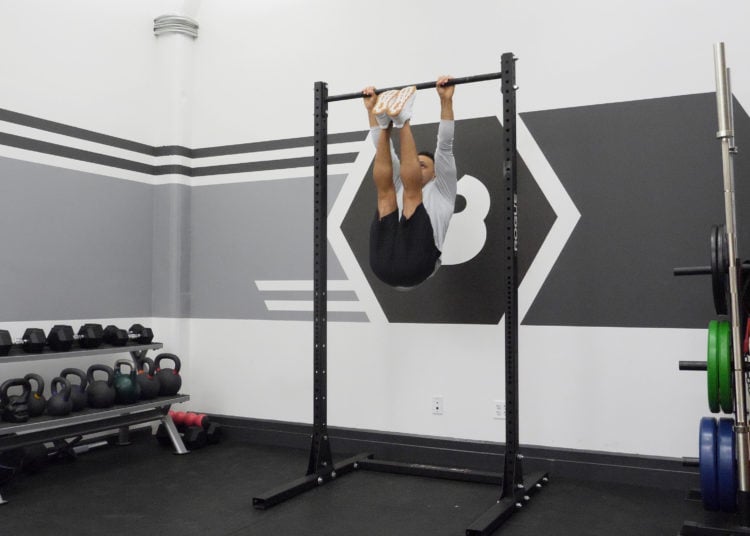 For leg lifts, see the explanation above. Leg lifts from halfway is functionally the same as leg lifts except that the starting position is an L-position. So when returning your legs to starting position to complete a rep, your legs will only go halfway down (the L-position) rather than all the way down like in a standard leg lift.

The progression from leg lifts to leg lifts from halfway should be smooth and without pause. 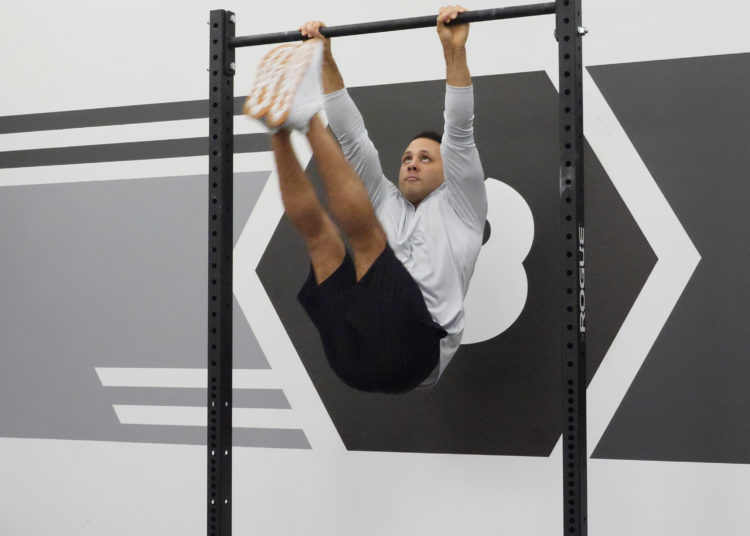 Wipers are like leg lifts with a large added variable. When in a dead hang on a bar, imagine a circle is drawn where the bottom point of the circle is your feet and the top point is the spot on the bar directly above your head. Now try to draw that circle using your feet; raising them up one side and lowering them on the other. Then draw the circle in reverse. That is one rep.

Wipers will engage your obliques more significantly than any of the other exercises discussed thus far. 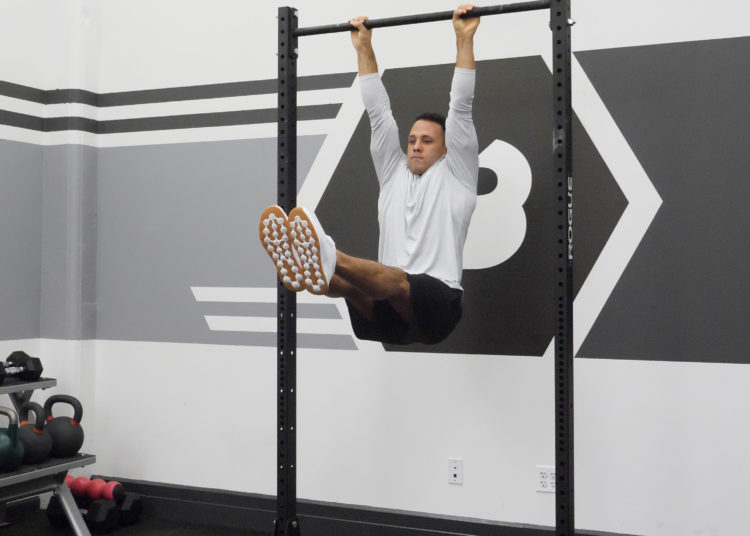 A static L-hold is pretty self explanatory. While hanging from the bar, raise your legs to ninety degrees so that you assume an L-position and then hold.

Side-to-side L-holds consist of rotating your legs horizontally to each side while in an L-hold. Da Silva does three reps to each side when performing the progression. Do what feels comfortable, but aim to align your feet with your torso on one side before rotating to the other side. 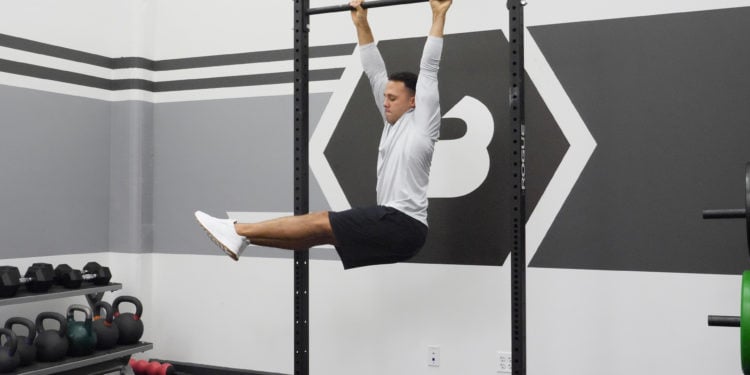 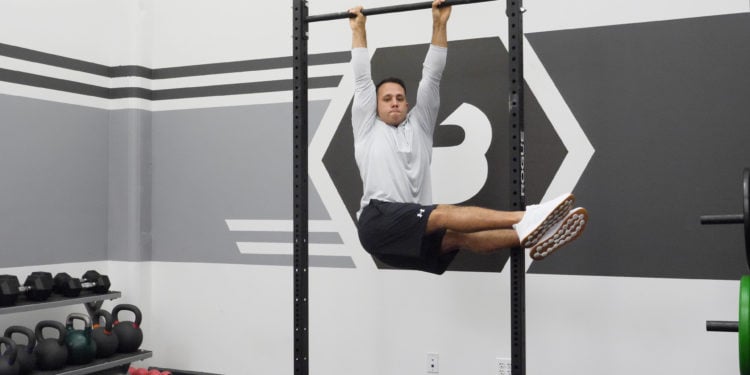 If you are not used to training your core with the kind of volume Da Silva is recommending with these exercises, don’t sweat it. They are designed to help you build the strength and stamina required to eventually tackle the advanced core progression. If you watched the video, Da Silva makes it looks easy, but he was an alternate for the 2019 Gymnastics World Championships and starting training gymnastics at age ten.

A stronger core can help you stabilize during barbell movements, improve your posture, and better prevent sustaining injuries. Next time you head to the gym, take Da Silva’s suggestions with you and give them a shot.