Crazy Muscle is a supplement company that was founded in 2003 with a pretty clear focus on bodybuilding. Most of their products are about gaining muscle or cutting fat, but they take something of a ‘big picture’ approach to the sport and their site is full of blog posts about managing your mental health, your relationships, and other lifestyle factors.

Their creatine supplement is unusual not just because it comes in pill form, but because it combines three different kinds of creatine. Let’s take a closer look at the reasons why.

An interesting addition is croscarmellose sodium, an ingredient that may help with absorption in the intestines. It’s often included in prescription medications for this purpose.

The pills also include magnesium stearate, a “flow agent” that’s just there to help make sure the ingredients don’t stick to the machinery in the facility in which it’s made.

Finally, these come in a solid pill form, not encased in gelatin like some competitors. To help the pills stick together there’s vegetable stearic acid and pharmaceutical glaze, which extends shelf life and helps to protect the pills from moisture.

It’s worth pointing out that the lack of gelatin means that unlike many creatine capsules, this a vegetarian-friendly product. However, it’s not vegan: pharmaceutical glaze is made from the leftover cocoons of an Asian insect called the lac. If you don’t like consuming insect secretions — say, you’re against consuming honey — then this may be off limits for you.

So, what’s up with these forms of creatine? There are 5.001 grams of creatine all together, a supplement that’s strongly linked to muscle power output, endurance, and hypertrophy, and the vast majority of it — 4.8 grams of it — is creatine monohydrate. This is the most popular and most widely researched form of creatine, so one can be pretty confident that it will produce the effects listed above. (Five grams is a standard serving size.)

The other forms of creatine have a lot less research behind them. Let’s start with creatine pyruvate, which is creatine that’s been bound with pyruvic acid. Crazy Muscle state on their website that creatine pyruvate is “stronger than monohydrate,” but there’s very little evidence to support this. One study suggested that taking some creatine pyruvate may result in more plasma creatine in the blood, but that doesn’t necessarily mean more creatine went to the muscles or that it results in better performance. (In fact, it may mean the opposite: that less creatine went to the muscles than usual and more of it wound up in the plasma.) Some research suggests that pyruvate is better for endurance, but others conclude that it isn’t.

There’s not a ton of evidence to suggest that creatine pyruvate is superior to creatine monohydrate and the same goes for creatine alphaketoglutarate, which has even less research behind it.

That’s not to say that these two kinds of creatine are inferior to monohydrate; they’re probably about as useful as each other. And even if they were inferior, there’s still 4.8 grams of regular monohydrate, which is a perfectly useful amount. What we’re saying is that the claim that this is a superior product because it has two extra kinds of creatine doesn’t have much evidence behind it.

That said, there is good evidence that the croscarmellose sodium helps with absorption, and I was pleased to see it in the contents.

This product is also made in a GMP facility, which stands for Good Manufacturing Practices. GMP facilities need to abide by certain regulations enforced by the U.S. Food and Drug Administration that help ensure purity of the product. That said, it hasn’t been tested by a third party tester like BCMG or Informed Choice, an extra layer of quality control that some products enforce. Crazy Muscle also point out that this product may contain allergens like wheat, peanuts, and/or shellfish.

This costs $14.50 for 30 servings of 3 tablets. That’s 48 cents per serving or 9.6 cents per gram of creatine. That’s pretty expensive for creatine; it’s not hard to find a competitor that’s closer to 4 to 6 cents per gram. The extra cost is presumably due to the three kinds of creatine and the process that’s required to make a solid pill. If you’re really excited about these novel kinds of creatine, the cost may be worth it to you.

There are plenty of pros to this product: the croscarmellose might boost absorption, it’s more portable than powder — making it easy to take a fistful to the gym or on the road — it’s made in a GMP facility, and unlike most pills it’s vegetarian-friendly, albeit not vegan.

I’m not convinced that the three kinds of creatine make this a superior product to plain creatine monohydrate. But all those advantages listed above may make you happy to pay the extra money nonetheless. 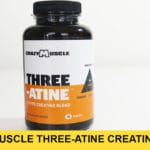