Inside the Crazy Strength Sport of Finger Wrestling

On first impressions it may look like a hyper macho show of competitive strength to win the attention of the nearby, 6-steins-of-beer-carrying waitress, but the German strength sport of finger wrestling (in German: Fingerhakeln) is not just a casual drinking game amongst Oktoberfest revelers.

In fact, like most things (beer, car manufacturing, and being on time), Germans take this aspect of their culture extremely seriously.

The sport dates back to the 17th century and whilst historically, finger wrestling is said to have been a method of solving disputes among men, today it is an organised sport featuring annual competitions for varying age and weight categories in Bavaria (Germany), Austria, and the alpine regions of western Europe.

At its core, finger wrestling involves two men sitting at opposite sides of a wooden table, middle fingers interlocked in a leather band, attempting to drag their opponent across the table. On either side sits a spotter ready to catch a backwards fall, and an umpire decides a winner after two defeats in an extended K.O. format.

As in any competitive sport, the rules are strict – the dimensions of the table (109cm x 74cm x 79cm) and the stools (40cm x 40cm x 48cm) are standardised and only members of a registered finger wrestling club or association can compete.

Once the umpire chooses the leather band to be used (usually 10cm long and 6-8mm wide) and middle fingers are interlocked, neither competitor is allowed to stand up again. At the command “beide Hakler, fertig, zieht!” (both wrestlers, ready, pull!) the match begins, and after a few seconds of intense pulling and resisting (the nail-biting battles rarely last longer than 60 seconds), the round’s winner is decided.

It’s a strength sport that today is practiced by hundreds of people of several weight and age categories – from students (ages 6-15) to seniors (ages 55 and over) and light, middle, semi-heavy and heavyweight divisions, the last being for anyone over 90kg (200 pounds).

It’s a battle of human strength, pain control and proper technique that requires not just a firm grip but a well-trained body, strong mind, and a good understanding of your rival.

“You really have to be able to read your opponent,” says Emil Raithmeier, three-decades-long member and competitor in the Rimbach Finger Wrestling Association, south of Frankfurt.

“It’s just as much about physical strength as it is about mental strength. You need to be able to overcome the pain and – even more so – intimidate your opponent by maintaining a neutral facial expression.”

So how do you train yourself to be able to catapult another human body towards you with a single finger?

Turns out, it’s actually mostly in the shoulders. Standard upper body strength training at the gym goes a long way in preparing competitors for the unusual position of sitting on a stool with one hand and one shin pushing on the edge of a table for support whilst the other hand is locked in a two-finger embrace.

Of course, to minimise injury, the all-important middle fingers need to be strengthened as well, and one can often find finger wrestling competitors hanging by a single finger from hooks attached to the ceiling, leather bands tied to pieces of furniture, or catches on a wall or a bookshelf. 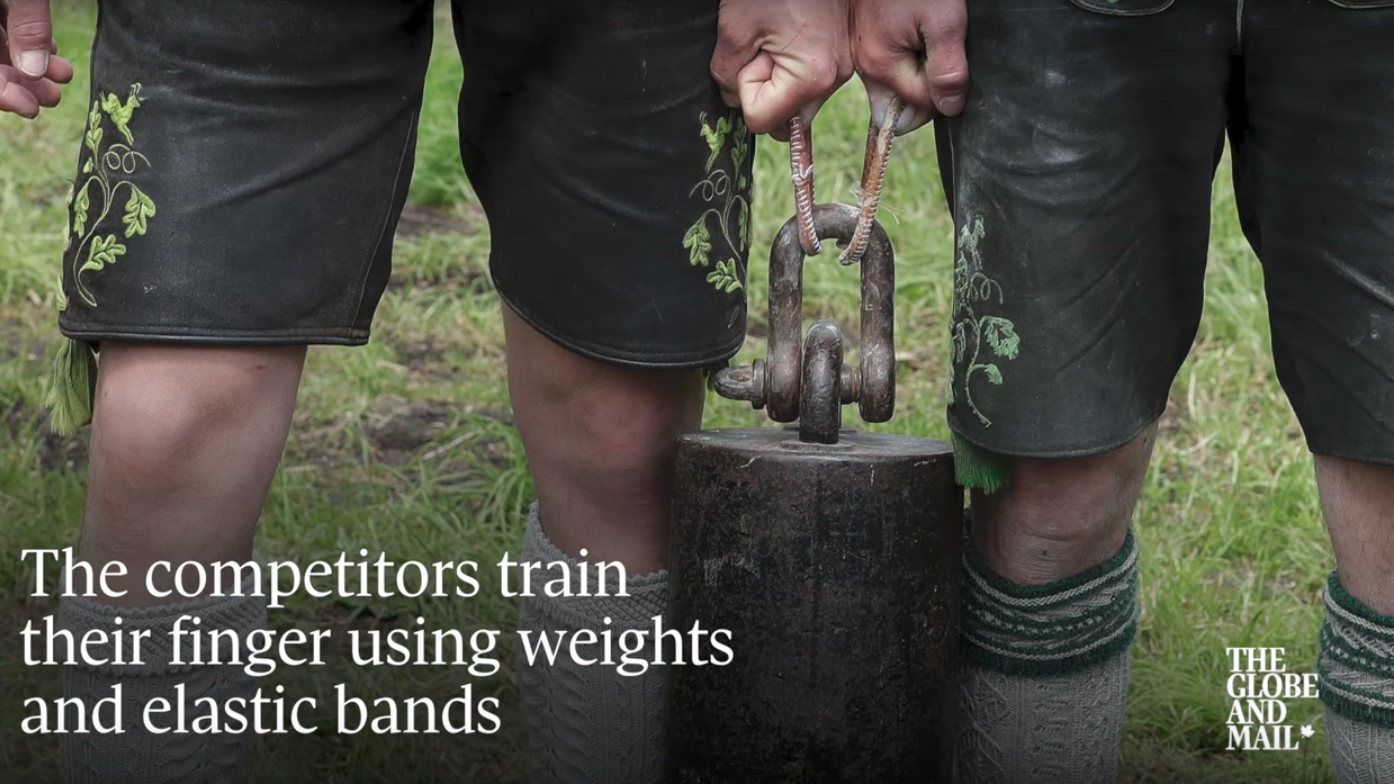 So, are there often injuries?

“You need to have thick callouses on your fingers, otherwise the injuries are very painful. Thin skin rips off easily, tendons tear and joints dislocate. You have to make sure to use magnesium powder to reduce friction – this is the only protection that’s allowed.”

So with all that pain and risk of injury, what’s the attraction?

“The best part is the camaraderie,” says Mr Raithmeier. “You’re enemies when you’re sitting across the table but as soon as the match is finished and no matter whether you won or you lost, you’re friends again.”

Friends again and ready for, no doubt, another stein of beer.

Featured image via The Globe and Mail on YouTube.