Swinging a bladed weapon in a fatigued state isn’t what most people would call a healthful activity, but those people don’t know the truth about woodchopping. It’s an astoundingly effective combination of strength, speed, cardio, agility, and flexibility that can benefit almost any athlete.

“Your average event lasts about a minute, so it’s like a sixty-second sprint, but it takes months of dedicated training,” says Laurence O’Toole, seven-time winner of the annual Easter woodchop competition in Sydney, which is widely considered the de facto world championship. “You need to get strong and stable in the core, hips, and back. I do a lot of deadlifts.”

Indeed, while the swinging motion might look like an arm exercise to the untrained eye, experienced strength athletes will notice that wood chopping is primarily a core exercise that also recruits the grip, shoulders, back, and hips.

Legend has it that the first modern woodchopping contest took place in 1870 as the result of a drunken bet between two Tasmanians in a bar. (Seems plausible.) Another states that woodchopping as an event originated in 16th century Basque Country, where it’s said that a man needed to run a marathon and chop through ten logs to gain permission to propose to his would-be wife. Today, countries all over the world hold versions of the woodchopping and lumberjack events. Some, like the Aizkolaritza games in the Basque Country, are marathon events that involve chopping wood for up to forty-five minutes at a time. In other places, like the Lumberjack World Championships in Wisconsin, events also include tree climbing, bucksawing, and logrolling. (That’s running in place on a partially submerged log as it spins.) Today, we’re looking at perhaps the most iconic event: the underhand woodchop. 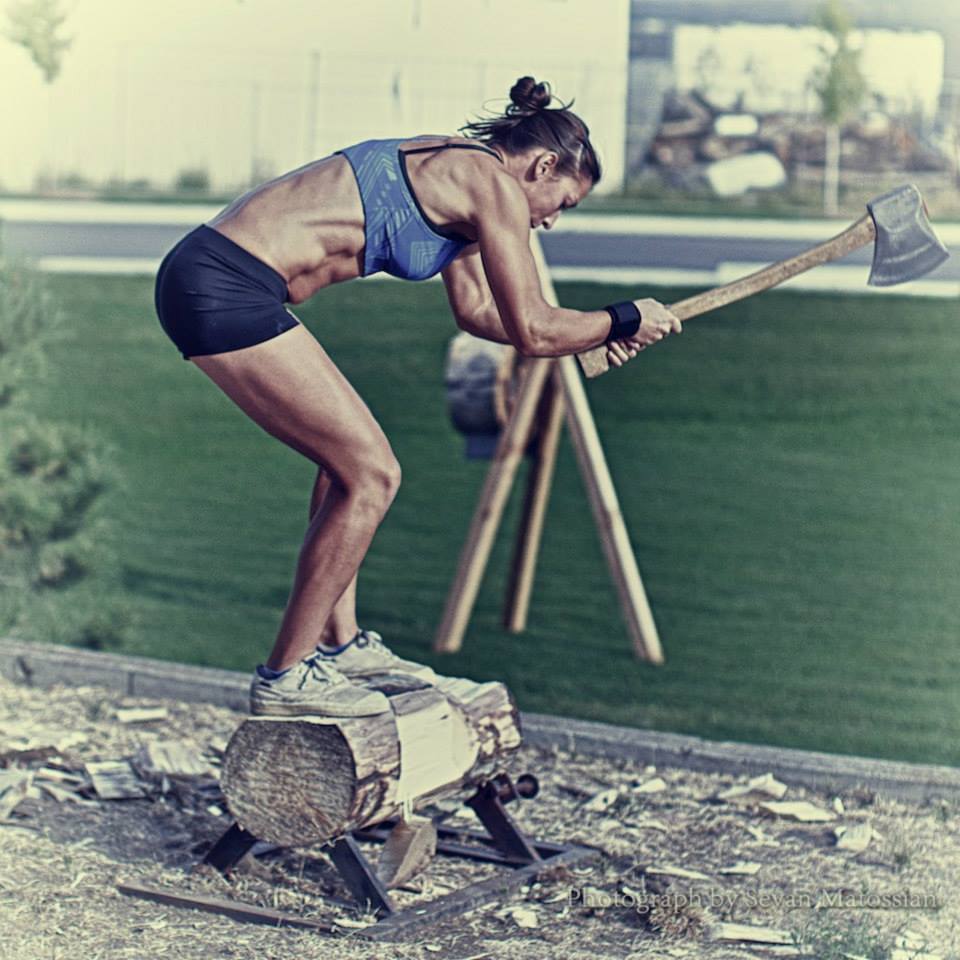 Erin LaVoie during the underhand chop.

“It’s absolutely zero to one hundred, immediately,” says Erin LaVoie, who has broken multiple world records in the underhand chop and is the current holder of the Guinness World Record in Christmas tree chopping. (She felled twenty-eight of them in two minutes.) “It’s an all-body type of workout. When I chop for too long, I feel it in the shoulders, back, and legs. But if you don’t have a good core strength, you just can’t do it.”

“You cannot be a good woodchopper without good alignment,” O’Toole adds in his thick Australian accent. “The feet need to match up to the knees, the knees to the hips, and the hips to the shoulders. And the ax needs to match up to the middle of your body, right between your eyes. Don’t bring it over your shoulder. It comes straight up and straight down your midline.”

This means he pushes a lot of energy through his feet, and in some respects, LaVoie points out that this movement pattern resembles a Russian kettlebell swing. But there’s an important and fascinating difference: the underhand chop is a hip closing movement. This is extraordinarily rare in strength sports; most signature exercises, like snatches, swings, and keg tosses, are about explosively opening the hips. Very few – save the medicine ball slam and GHD sit-ups – involve a hard crunch inward.

The underhand woodchop is like a sit-up on steroids. On a wobbly log. That you’re actively trying to destroy.

How Do You Become a Champion?

This is a sport that requires plenty of well-honed technique, and much of O’Toole’s training is, well, honing his technique. In the weeks leading up to a competition he’ll spend about thirty minutes chopping wood three or four times a week, but he points out that most of this time is spent recovering and setting up the next log. He only uses four or five logs per workout, each taking about thirty seconds to split.

Since competition logs can vary in size and type, he’ll chop logs of different diameters when training – the biggest, hardest log he’ll face is an Australian Silvertop Ash at the Sydney championships, which is fifteen inches in diameter.

But O’Toole doesn’t change the size or weight of his ax. “This is a sport that’s about doing the same thing over and over, perfectly,” he says. “You’ve got to keep all the variables the same as you can.” 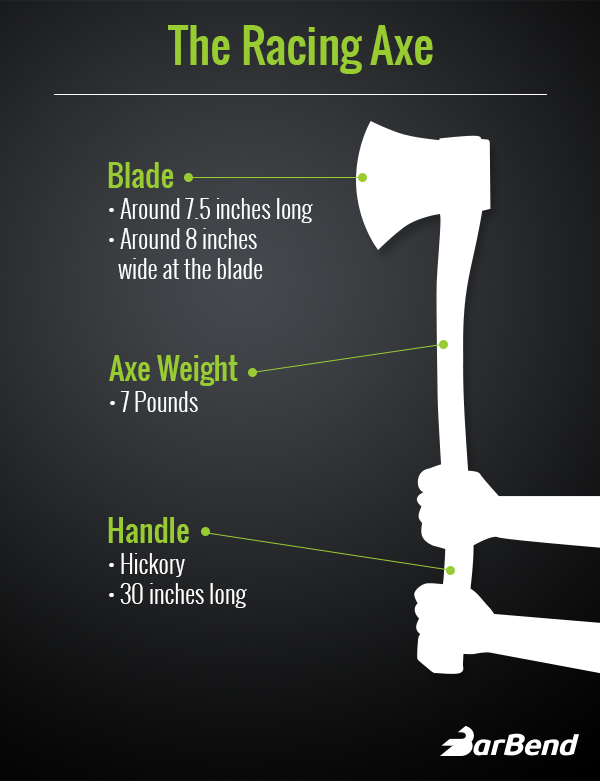 In addition to chopping, he lifts weights about three times per week, focusing on lower body exercises like the squat and deadlift, while making sure to include suspension training and bodyweight movements. To hone his reflexes and coordination, he adds a few weekly boxing workouts as well. (He finds that, “Too much gym work can get you a bit uncoordinated.”)

“Since I do CrossFit, I understand that full-body workouts that are constantly varied are very important,” she says. As a competition approaches, she’ll work out twice a day, four or five times per week: CrossFit in the morning and woodchopping at night.

To make sure her balance is on point, she incorporates weekly yoga sessions as well. “If you’re not properly balanced, you’re losing forty, maybe sixty percent of your power.” 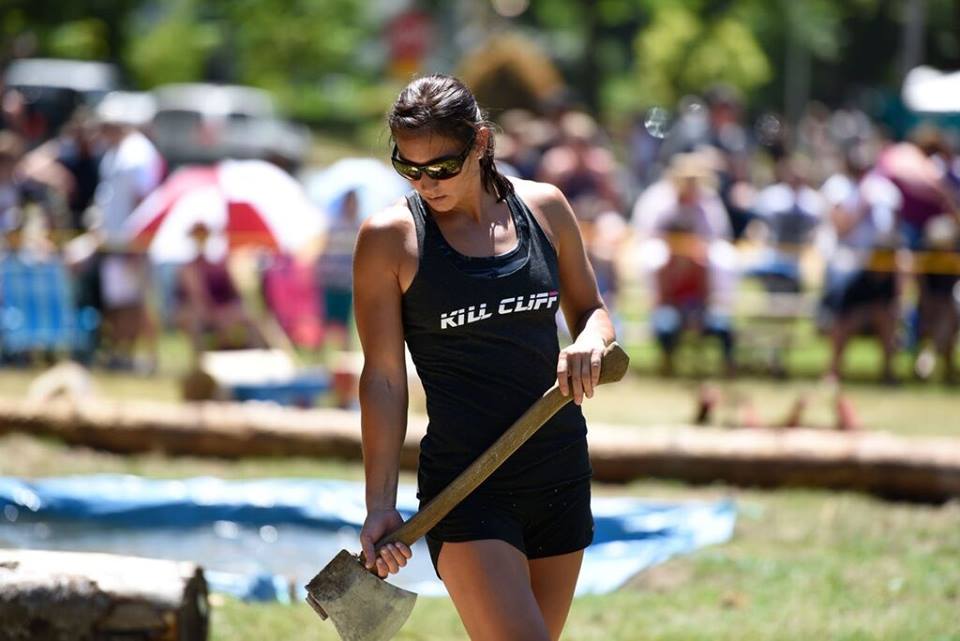 Want to Branch Out?

Woodchopping doesn’t fit neatly into any one category. It’s a full-body-HIIT-strength-speed-compound-core-balance exercise, and it’s shockingly effective in every one of those modalities. If you’re looking to increase your functional fitness and learn a badass skill while you’re at it, grab an ax (O’Toole likes the Tuatahi racing ax) and find some events and forums on sites like CanLog and the American Lumberjack Association. Chop chop!

Update: A previous version of this article stated that Basque Country is a region in Spain. It is in fact under both Spanish and French administration.

Trey Mitchell Recaps His Performance at the 2022 Rogue Strongman Invitational