Is It Shallow To Want to Date Someone Who Works Out?

“Is it shallow to want to date someone who works out? Discuss,” I asked through a Facebook status.

I knew the answers I’d receive would be vast, my friends from my alma mater — a small, women’s liberal arts school — would be quick to mention the possible ableist, classist, and body-negativity of that statement, while my friends from CrossFit quickly say, “No!”

However, the answers I received, while similar to what I anticipated, proved that there is not a clean cut “yes” or “no” answer to this question. Rather the answer is “no, but…” or “no, because…” with room for amendments, clarification, and in some cases, justification.

Why was I asking? Why did I care about the opinion of 1,000 plus Facebook friends who I hardly had any relationship with or relation to? The weekend prior my roommate threw an apartment-warming party, with the majority of her guests being her friends from work or college. As beer was consumed and a deck of cards was taken out for a game of Kings, the question was posed to the group of ten, “What’s your type?”

Each person went around detailing the personality traits they’d often found themselves attracted to, or the physical characteristics their eye was most drawn. It was my turn next, “People who work out or identify as athletes.” Suddenly, the energy in the room had shifted, my answer was up for discussion. I paused, “What? Does that seem shallow? Different from liking redheads,  Southern accents, or tattoos?”. The answers that evening foreshadowed the answers from the Facebook poll: “It’s not shallow… but….”.

Here were some of the amendments, cautions, and justifications I heard

1. But It Depends Whether Or Not You Really Mean “The Body Type of Someone Who Works Out”

Ok, so we’re not your *typical* couple… we find traditional “date night” to be a drag. 😳 Here’s the thing: when we had our son, everyone said “make sure you take time as a couple and DO DATE NIGHT!” 💑 So, we did… we’d go out to dinner, eat calories we regretted, spent too much 💰💰💰, and left feeling unsatisfied with how we spent our time. Finally, we realized that every couple is different, and for us, “date night” might mean something entirely different. 🤔 Want to find out what we do instead? Check out our latest @YouTube video, “These 3 Date Night Ideas Will Bring You Closer Than Ever.” LINK TO OUR CHANNEL IN BIO 👆🏼

2. But There Are SO Many Reasons Why A Person Might Not Work Out

Those who argued that it was not shallow felt certain that someone who works out is innately disciplined, while others noted that there are MANY reasons why a person may choose not to workout, that have NOTHING to do with discipline. One respondent shared, “If you want to date someone who works out because it shows some kind of commitment to health and body image then not only is it conceited and one-track minded, it is also very ableist, and most likely classist (as someone who works a regular job or 2 or 3 at minimum wage doesn’t have time to do that, and probably can’t afford a fancy a gym membership).”

Another respondent agreed, saying, “There are of many ways to work out with a disability or with a lower income, but I think it’s important to note that sometimes the decision to not work out isn’t necessarily an indicator of a difference in values or a disinterest in living a ‘healthy lifestyle’.” What these respondents were arguing was that working out is not the only indicator of a shared interest towards health. In their opinion, it’s not shallow to want to date someone who works out… but if you limit your dating pool to only people who work out because you think only those who work out are disciplined or share your values, your desires could be coded by ableism and classism.

Some of my favorite answers came from people who shared personal stories of dating and falling in love with both people who do work out and don’t. On woman shared, “I’ve dated both people who work out and who don’t. While it’s nice to have someone with the same interest in fitness that I do, I’ve been very happy and in love with people who don’t”. Implicit in her answer is that while in the initial stages of dating and finding a partner, it can be easy to define your type as “someone who works out”, it can’t be a be all and end all because you can be just as (and even more!) happy and in love with someone who doesn’t workout. Perhaps “somehow who works out” can be a general guideline, but according to this respondent, if you make it rule, you’ll only hurt yourself.

4. Because Working Out Is A Social Thing

When single, I’ve jokingly pleaded with the universe for a Tinder made just for people who workout because it’s nice to have someone to go to the gym with. I was looking for people with similar interest and dedication to working out to befriend, and according to one respondent, looking for a partner with a similar interest in working out is similar! He says, “No, at the end of the day you want to date someone with similar interests as you. If one of those interests is working out, so be it. At the end of the day, it really isn’t any different than wanting someone who reads the same authors (or at all) or likes the same movies (or enjoys doing Netflix & Chill).” What he was suggesting is that working out is a thing to do. In a relationship, you do things together. It might as well be a thing you both enjoy doing… like working out. Well, when you put it like that….!

5. Because It’s A Lifestyle

For some, working out is what you do for 45 minutes in the morning before a shower or an after-work past time and excuse to sweat out some pent-up energy. For others, it’s a lifestyle.

One woman shared, “It’s important to understand for some people, working out is a LIFESTYLE thing as well as a HEALTH thing. I am one of those people, I find joy in being active in every way. So, I want my partner to enjoy working out as well, with or without me, doesn’t matter. AND I want my partner to live a long happy life and that means being healthy in various ways in addition to fitness like eating well, being mindful and present, having energy to do things, etc.”

So for some, working out is part of a larger “lifestyle” that revolves around physical, mental, and emotional health, while for others it is a lifestyle because of the passion, time, and energy it requires. In both cases, working out is so much a part the respondents everyday life that dating someone who works out would allow the couple to connect fully and deeply, and even just a place to spend time together (the gym, or the box) and something to bond over.

To me, that sounds like a preference for compatibility, not shallowness.

Editors note: This article is an op-ed. The views expressed herein are the author’s and don’t necessarily reflect the views of BarBend. Claims, assertions, opinions, and quotes have been sourced exclusively by the author. 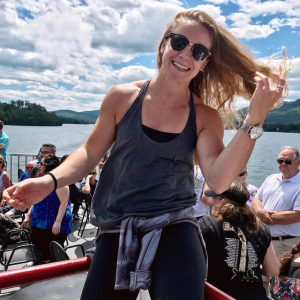