One piece of equipment that Harbinger is most known for is their lifting belts. When we received the Harbinger 5″ Foam Core Belt I was pumped to see how it held up in the gym. This is a nylon and cloth based belt with an added foam core for comfort. I was interested to see if the foam core sacrificed the belt’s stability, so I used both strength and power movements in my tests.

The lifts I used to test this belt were the power clean, back squat, deadlift, and front squat.

This belt is a nylon and cloth base with an added foam core. In terms of stability I thought this belt held up pretty well for being a nylon and cloth base. These style belts aren’t typically known for increased stability due to the bendable nature of their material. This being said, there were aspects of this belt’s stability I liked and others that I disliked. I liked the additional inch this belt gives. Nylon belts are typically 4″ wide, so the extra width helped provide additional torso stability. This helped minimize lack of rigidness when maintaining certain postures. 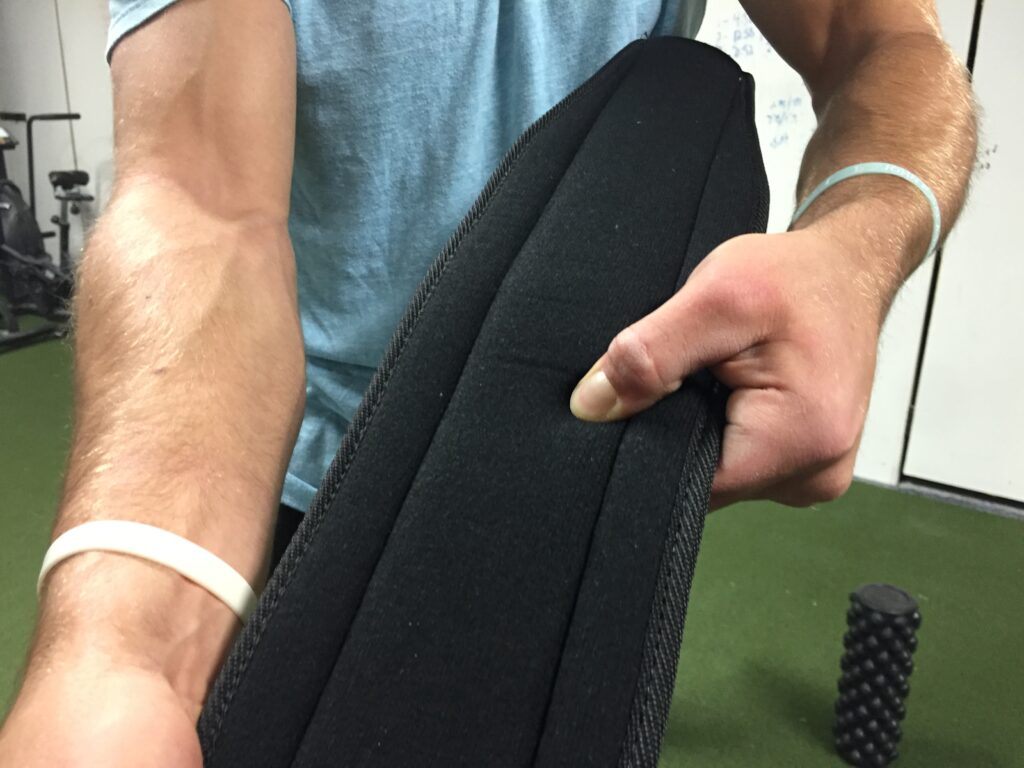 I also liked the 3″ thick velcro strap. An issue some nylon and velcro belts can sometimes have is a small velcro strap, which then causes the top and bottom of the belt to bend with the torso. I felt that the extra belt width and strap width worked in a synergistic manner to support the torso. While these were great compliment to the belt I wasn’t a huge fan of the foam core. Personally, I like a belt that’s a little more rigid and I thought the foam core took away from the belt’s ability to truly support the torso. Also, the foam core wasn’t the best at absorbing sweat when lifting shirtless so it slid around on my torso a little bit, which can cause some instability.

When it came to the lifts themselves this belt performed pretty well for what it is. This style belt is often used for its ability to provide stability while remaining versatile. When it came to dynamic movements like the power clean this belt never limited my mobility or felt uncomfortable. That’s the main aspect the foam core has going for it. However, if you’re looking for a belt to support maximally loaded lifts, then this may not be the best choice.

This belt may lack in the area of stability, but it definitely doesn’t when it comes to comfort. Nylon based belts are often regarded as more comfortable than their leather counterparts. That remains the case with this belt and the added foam core was a nice touch. From the very first lift this belt felt comfortable and there was never a grace period where I had to break it in. 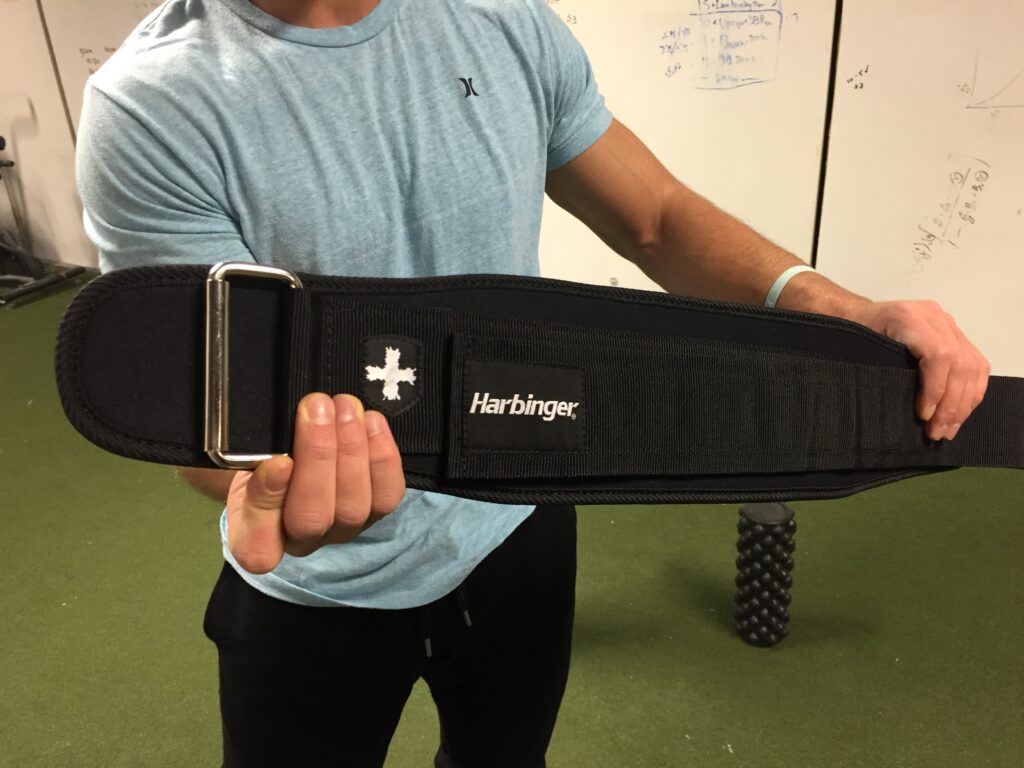 Another aspect I liked was how forgiving the foam core was on the skin. It was extremely comfortable on bare skin, which is good for those who want a versatile comfortable belt for functional fitness workouts or WODs. The top and bottom edges are rounded as well, so they’re soft and don’t dig into the ribs or torso in a painful manner. One issue I could foresee happening with this belt is the possibility of the foam wearing down with overuse. If this belt’s foam core becomes disfigured, then you could sacrifice some of its comfort.

The material used on this belt is a nylon and cloth base with the inside being a little softer than the exterior portion. This belt is composed with a plush tricot lining, which is supposed to trap heat and keep muscle warm throughout a lift. When compared to other nylon belts I’ve tried, I thought this one was on the softer side. The foam core has some give to it and you can squeeze the padding without leaving lasting imprints, which suggest the foam core is well-constructed. There’s a stainless steel loop that’s enclosed by a double stitched strap, so the strap feels sturdy and doesn’t move like in some nylon belts.

Anytime you purchase a nylon or cloth based belt durability should be considered. These are belts that may not last you a lifetime like some leather belts have the potential to do. In regards to this belt there weren’t any immediate durability issues, but I could see two future issues happening with excessive belt use.

First, velcro has a lifespan and will eventually lose some of it’s sturdiness due to strapping overuse. This specific belt has three inches of velcro, which is good and bad for two reasons. It’s good because you have extra velcro to work with if one section loses it’s initial stickiness. On the flip side, if one portion loses its ability to stick, then the extra 5″ width might collapse easier.

Second, the foam core may not last as long as a standard nylon belt. I liked how the foam felt, but I worry it will wear out easier than a standard nylon that has less depth to it’s shape. Also, I’d be curious to see how excessive sweating effects the way this belt hugs the body over an extended amount of time.

The price of this belt was pretty fair and starts at $21.99. This price is right inline with other nylon belts on the market, but is somewhat better. I like that this belt has an extra thick velcro strap and 5″ width, which makes me like the price for this belt even more. If you’re someone who’s a recreational lifter and wants comfort over rigidness, then this belt is a good fit. Keep in mind that it won’t last forever, but I think the price is fair for what the belt has to offer.

To conclude my review on the Harbinger 5″ Foam Core Belt there were aspects I really liked, such as the extra inch thickness and 3″ velcro strap. I also enjoyed the comfort this belt had to offer, especially on bare skin. However, if you’re someone who’s looking for an extremely stable belt, then this may not be your best choice. In addition, this belt does have a lifespan, but a fair price point, so you can make the call on what you weigh heavier.

All in all I thought this belt was a good choice for lifters who value comfort over stability, but still want a belt to help support the torso. 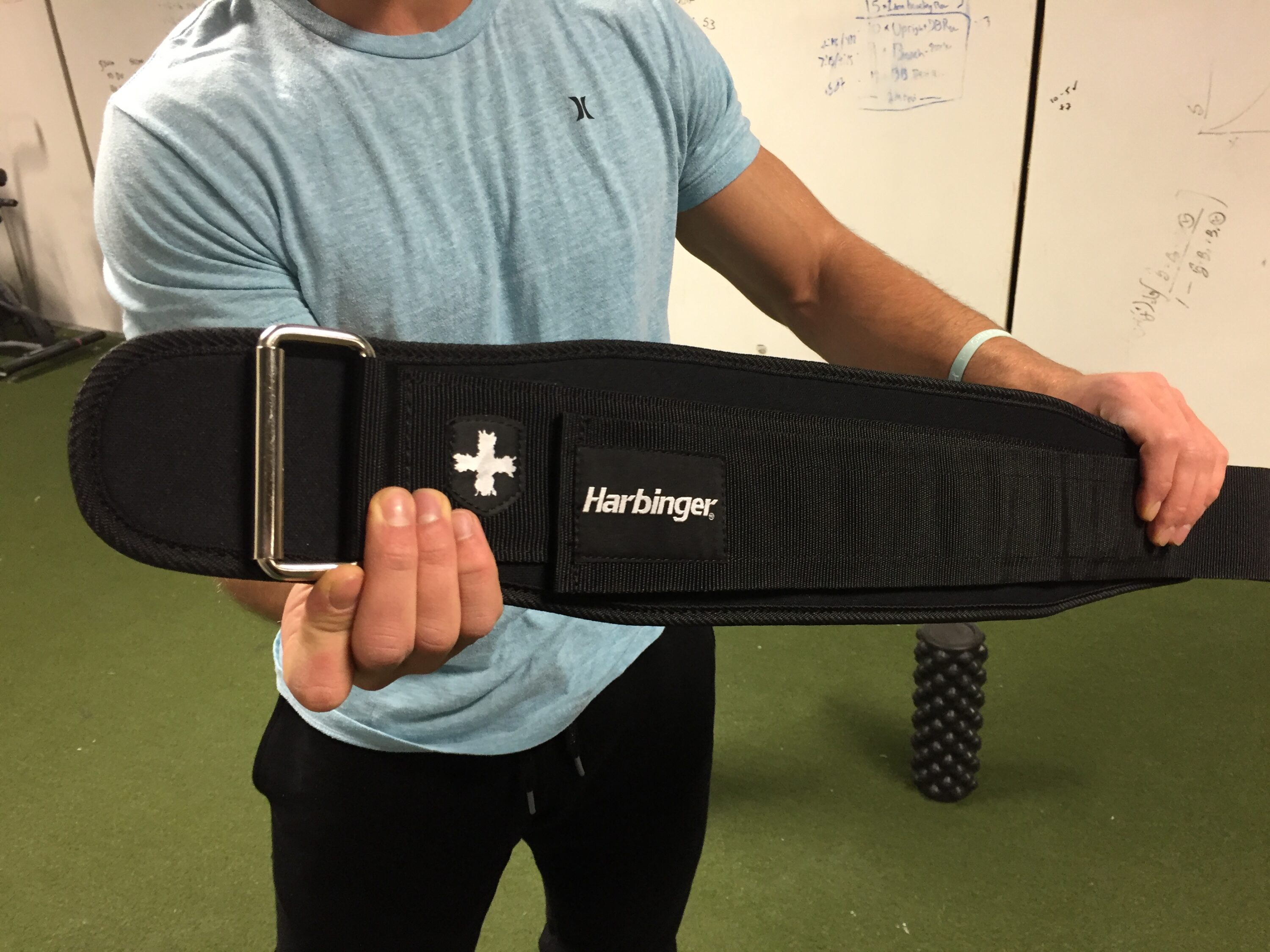