Why the Belt Squat Could Be Your Secret to Strength Gains

There’s a certain simplicity in a lot of basic barbell movements. Squatting is a natural human movement, so rack some weight on your back and make the muscles that perform the squat get stronger. Picking up heavy stuff is natural, so deadlifting increasingly heavier weights strengthens that movement pattern.

The belt squat is different. Like a lot of awesomely useful exercises, it’s weird. It’s not something any caveman ever had to do. But a belt squat machine could be one of the best investments your gym can make — even if you think exercise machines are baloney. 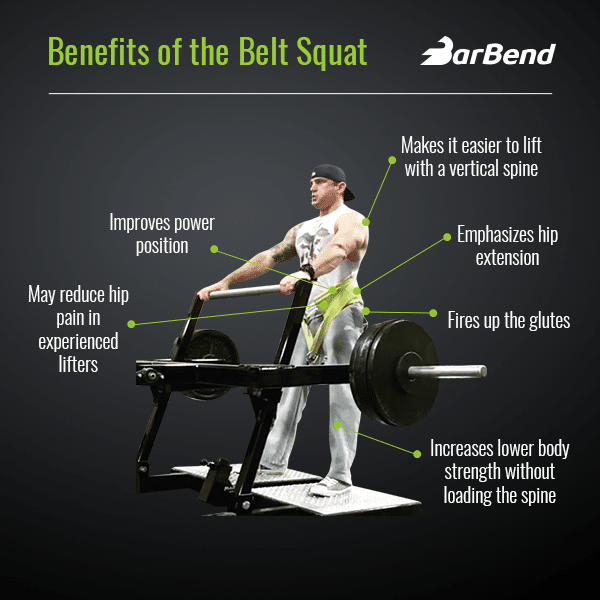 The Benefits of the Belt Squat

“With weightlifters and powerlifters, everything pretty much loads the torso, but this is one way to increase leg and hip strength without worrying about damage to the back,” says Travis Mash, the head coach at Mash Elite Performance. “I have some pretty bad hip issues and when I started doing the belt squat, it allowed me to squat without pain.”

A really important benefit of the belt squat is that it allows an athlete to load the lower body without loading the spine or using the upper body, so it can be hugely useful for athletes with tricky backs and shoulders — even tight elbows can make the back squat problematic. Not so with the belt.

“The biggest benefit that I’ve noticed is that it really emphasizes hip extension,” says Mash. “The way the belt sits, if you don’t activate your glutes you won’t reach extension, so it pretty much turns every single exercise into something that emphasizes the glutes.”

By taking the upper body largely out of the equation, it’s a little similar to a leg press or hack squat, but it’s even less stressful on the spine while still providing many of the stability and balance benefits of the barbell squat.

Another reason the movement can make squatting less painful is that it makes it a lot easier to squat with a vertical spine. Mash likes to have an athlete perform a belt squat while holding a kettlebell in front of them for a “perfectly vertical spine every time.”

Need to work around an injury? Belt squat. Want to train legs but you’ve been loading the spine a lot? Belt squat. Core too fatigued for barbell squats? Belt squat. Want a high intensity, balls-to-the-wall leg workout without the injury risk or exacting form requirements of barbell work? Saddle up.

Do I Need to Use a Belt Squat Machine?

We’re differentiating here between the belt squat machine and what’s usually called the hip belt squat, which you can see two Natalie Adairs using in the Instagram post above.

To be clear, they both have a ton of benefits and most of them overlap. It’s just that using the hip belt is a little more awkward.

“When you just use the belt, it limits the amount you can load because it’s more awkward when it’s sat on the waist,” says Mash. “You’ve got to find two things to stand on, it’s awkward getting up on them, and from a biomechanical standpoint I don’t feel the same amount of force required to achieve true hip extension when I’m just using the belt.”

[Belt squats are one of the 4 most underrated weightlifting accessories we talked about. Click through for the full list!]

He adds that when using a machine, partly due to the size and stability of the platform and its rack, it’s possible to use the belt with a wide variety of other movements: Mash says he’s developed sixty-four different exercises with his own. These include barbell push presses, rack pulls, kettlebell Romanian deadlifts, snatch high pulls, and a ton of other movements that are difficult if not impossible to perform if you’re using a hip belt on top of a couple of boxes.

But if you don’t have the whole machine, you can still get a lot out of a simple hip belt — the same kind folks use for weighted pull-ups. Some of the aforementioned issues, like trouble using a lot of plates at once, can be remedied by having a partner who can help you load.

“In our gym we coach weightlifting, powerlifting, sports performance, and gen pop, and I would say across the board every single member uses the belt squat machine,” says Mash. “If you want something that can be used by every population it’s a great tool, especially for training around injuries.”

Whether you’re training hypertrophy, strength, or power, the belt squat is a dynamite accessory exercise that’s too often ignored. If you have the chance to use one, do it. If you don’t, grab a hip belt and a workout partner and try it out.