Powerlifter Mark Bell Teaches Us How to Safely Spot the Squat, Bench, and Deadlift

The act of spotting is much more than helping a buddy complete their last rep on the bench. A spotter has a great amount of responsibility that’s tied to them at all times, and in some cases this responsibility gets taken for granted. This is most common in the newer lifters who may not understand how to spot, or even the importance of properly spotting.

This lack of knowledge isn’t anyone’s fault, but there’s probably never been a scenario when their spot was the only line stopping an injury from happening. Whether it’s the squat, bench, or deadlift, a spotter can be an extremely useful tool when it comes to an athlete’s safety.

In late August, Mark Bell at Super Training Gym posted a great video covering the topic of properly spotting each lift. He provided in-depth examples and explanations into each lifts, and it’s definitely worth a watch, even if you think you already know how to spot. 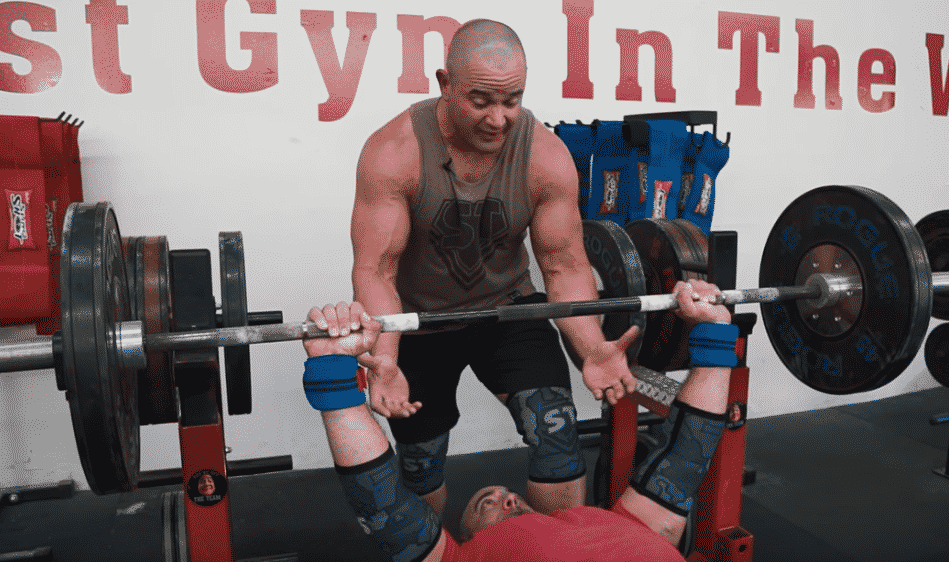 Disclaimer: It’s always advisable to lift with a spotter. In addition, certain variants of lifts will call for different spotting methods, and additional spotters.

If you find yourself rusty in spotting one type of lift, then don’t sweat it. Below we’ve outlined each lift with the most important takeaway points described in the video.

This is the most common type of spotting the squat you’ll see in the gym. It involves one strength athlete squatting, and another standing behind them ready to brace them in event of a failed lift.

This type of spotting is what you’ll see in powerlifting meets, and when a lifter is performing higher intensity loads. It involves at least two spotters, and is the most safe when it comes to the avoidance of getting trapped under the bar.

Another crucial talking point Bell mentions is to keep your lifting area clean. Dumbbells and other pieces of equipment around the feet of spotters and squatter can lead to injury.

Anyone’s who’s spotted a heavy bench, or even performed a 1-RM with a spotter will understand the importance of the hand off. This is an extremely crucial point that will allow a lifter to set properly and execute the lift.

When you’re spotting behind the lifter, Bell provided some great pointers, along with what to do for side spotters.

Bell explains that monitoring the area around a deadlift is just as important as spotting the lift itself. There’s always a chance that an athlete could pass out after a set, or heavy pull, so ensuring the area is clear can benefit a passing out athlete’s health.

[Why do some athletes pass out from heavy deadlifts? Read more here.]

In addition, Bell mentions that the spotter behind the deadlifter is there to catch a lifter in the event of them passing out. When an athlete passes out from a deadlift they will typically fall backwards.

No matter the lift, the goal should always be an athlete’s safety. It could be your friend, or a random person asking for assistance in the gym. Either way, a spotter has a great amount of responsibility for a lifter’s health and themselves.