How to Train for the Truck Pull

If you ask the average person what strongman is, they’ll probably reply with, “The guys that pull trucks, right?”

Of all the strongman events it might be the most iconic, and it’s typically the focal point of advertisements that try to draw the general public to a competition. It’s not hard to see why: It’s giant men throwing every atom of their bodies into moving one of the most massive and powerful vehicles – a symbol of strength in itself – step by agonizing step.

It even manages to combine pushing and pulling at the same time. “Full body” doesn’t begin to describe it.

“This is something that literally causes your heart rate to hit its maximum within just a few seconds,” says retired 105kg professional strongman Mike Gill. BarBend spoke to Gill to find out the best way to train for the impossible. 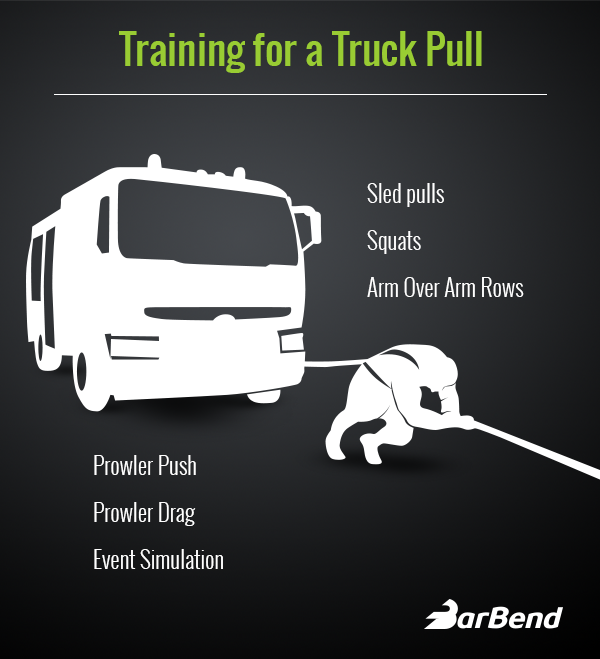 Your Strength and Conditioning Plan

The world record for the truck pull may have been set by the Fijian-Australian strongman Derek Boyer, who pulled a 51,480kg (113, 494lb) truck for a hundred feet, but the lower end of a truck’s weight is eight thousand pounds, which is a better place to start.

When it was introduced to the World’s Strongest Man in 1997, the competitor would only pull the truck in a harness like a draught horse, but most competitions now have the athlete simultaneously pulling on a rope attached to an immovable object. This is to help themselves along the route and transfer pulling force through the harness. Sometimes, the truck is pulled on sand or snow to make things even more difficult, but here we’re focusing on the standard version: man in a harness, pulling on a rope.

Firstly (and this probably goes without saying) you need a good squat. That’s key to any strength sport. This event demands powerful hips and total body strength, and squats will get you there. But you don’t want to just be proficient at heavy maxes, you need rep training – you’ll be taking dozens of steps, so while pure power is necessary, you need to get your endurance up to tolerate the high repetitions.

A photo posted by Pride Fitness Performance (@pridefitnessperformance) on Jan 25, 2017 at 3:57am PST

Second, to crank up your aerobic conditioning and strength-endurance, it’s important to incorporate prowler pushes, prowler pulls, and sled drags.

“You’ll want to use like sixty-second speed sprints with a harness hooked up to you so you’ve got that drag going behind you,” says Gill. “That low position that you’re in with a prowler push will get you comfortable with where you should be on a vehicle pull. Think about it: when you see someone use the prowler the right way, they’ve got their hands on those poles, their head is down, their chest is parallel, and they’re basically sprinting in that position.”

For those pulling a rope in their event, hand speed will be a big factor. Take a drag sled and set it up for a standing arm over arm row.

“That will help you muscularly, but it’s also going to get your timing down and get you a feel for the technique of moving one hand over another in a nice, straight rhythm,” Gill says.

These exercises are heavy on conditioning, which is an extremely important aspect of the event. Your body will need to be able to withstand the extreme type of lactic acid burn that the truck pull will produce in your legs and lungs. Learn to love it.

The final part of your training is simulating the event itself. First, you’ll need to buy a harness and a tow rope or chain. (Rogue and Ironmind sell their own.)

You may also want to wear a pair of gloves, though many strongmen prefer not to.

For footwear, Gill recommends investing in a pair of mountain climbing shoes because they’re designed to wedge into the ground. Remember that they should be uncomfortably tight — if you’re a size 11 and you order an 11, you’re probably wearing the wrong shoe. Go to a store that sells them, like REI, and get properly fitted. If you’d rather not, you can wear Chuck Taylors, just make certain you’re not in running shoes, as they’ll compress.

The final two pieces of equipment are a car and a very competent, very trustworthy friend to put it in neutral as you haul ass.

“Obviously, pulling any kind of car isn’t going to be as heavy as pulling a truck,” says Gill. “So you’re going to want your friend to feather the brake pedal, just enough that the light is on.”

He also recommends having another friend present to throw a chock under the wheel in case anything goes wrong – which is another reason to make sure you’re on a very flat plane. This is a fun event to train in groups, particularly since you’ll need other people there to help anyway.

No access to a vehicle? Use a prowler instead. No prowlers? Pile dead weight on top of a wooden pallet.

Gill recommends simulating the actual truck pull no more than once every two weeks for about two or three work sets per session. Find out the contest distance and use that as one training set. That will be enough to help you develop your technique and to achieve relatively consistent times. Gill stresses that it’s not an activity you improve at by practicing it at a high frequency. It’s more about technique and conditioning, and you can work on those qualities in the workouts we described above.

When it comes to form, the first rule is to stay almost as flat to the ground as you can get, like you’re a sprinter in the starting position.

“The worst thing you can do with a truck pull is stand up with it,” says Gill. “Now your power is going straight down instead of pushing back against the vehicle. You want your center of gravity to be low and have your chest parallel to the ground. Once you’ve built some momentum you can stand up a little, but you’ll lose your energy if you’re too vertical.”

Once your workout is over, everything will have been pulled out of your ATP stores, so you’ll want to ingest some sugar. For recovery, Gill recommends spending five or ten minutes lying on the ground with your legs straight up a wall in an L-sit to help take the blood and lactate out of your muscles. 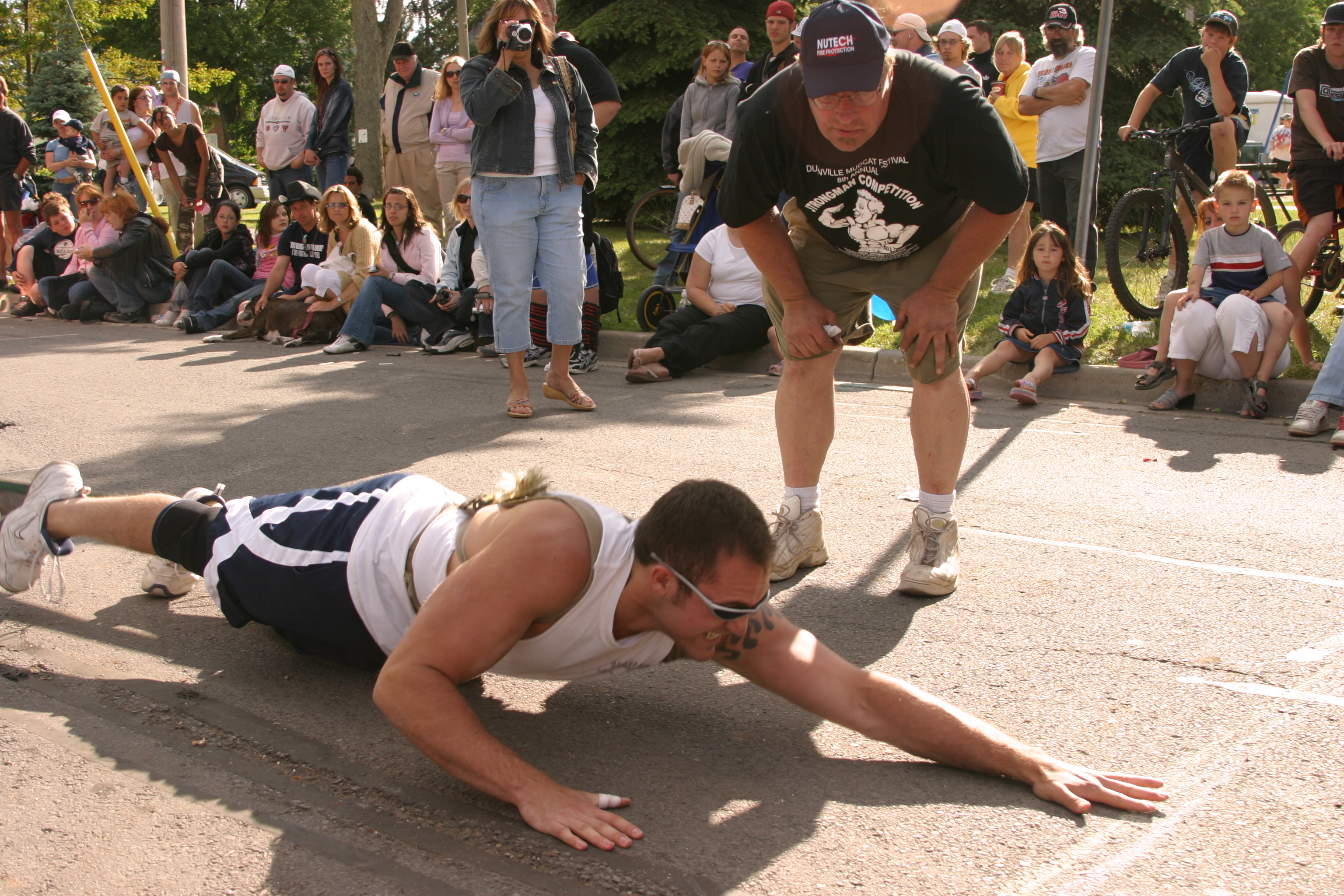 Make absolutely sure you check with your doctor before even think about training for this event. Nothing stimulates your nervous system or sends your heart rate soaring as high or as quickly as a heavy truck pull. But if you know it’s something you want to conquer, first talk to a physician and then start checking out strongman groups in your area.