An Introduction to Programming for Strongman (Part 1 of 3)

Without a doubt, Strongman is the most difficult weight discipline to program correctly. There are so many variations on a theme that you can never be fully prepared for every event at any given time. The sport is also in it’s infancy with just over 15 years of regulation as an athletic contest, not just a yearly TV entertainment program. I have done athletic programming for Strongman as a stand alone sport for just over a decade now. Through trial, error and established scientific concepts, I have developed a standard template that will improve general full body strength and performance in the sport. This outline is an excellent starting point for novices and is complex enough to guide an athlete to success at the National level. 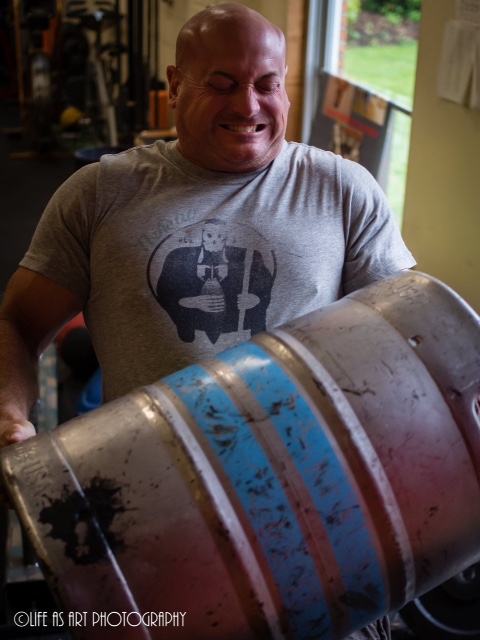 The first and most important part of this series (this article) will describe the concepts behind this style of training. Understanding this approach is critical to the execution of a periodized program. In Part 2 I will show you a basic template and how to modify and tailor it to your needs. The conclusion will discuss a group events training day; this is often the most abused and misused part of an athlete’s program. I will clarify how to train events without burn out while maximizing overall performance.

Far too many Strongman athletes have fallen into the same trap. During their weekly programming they have a leg day, a press day, a back day; fall out from old, often less effective, bodybuilding methods. These workouts apply a large amount of stress to a part of the body at once, then ask for a week of recovery before being trained again. Many athletes do not even know there are other ways to train! Marketing of this training is strong and has been prevalent for over 30 years because it is easy to write and it “feels” effective. 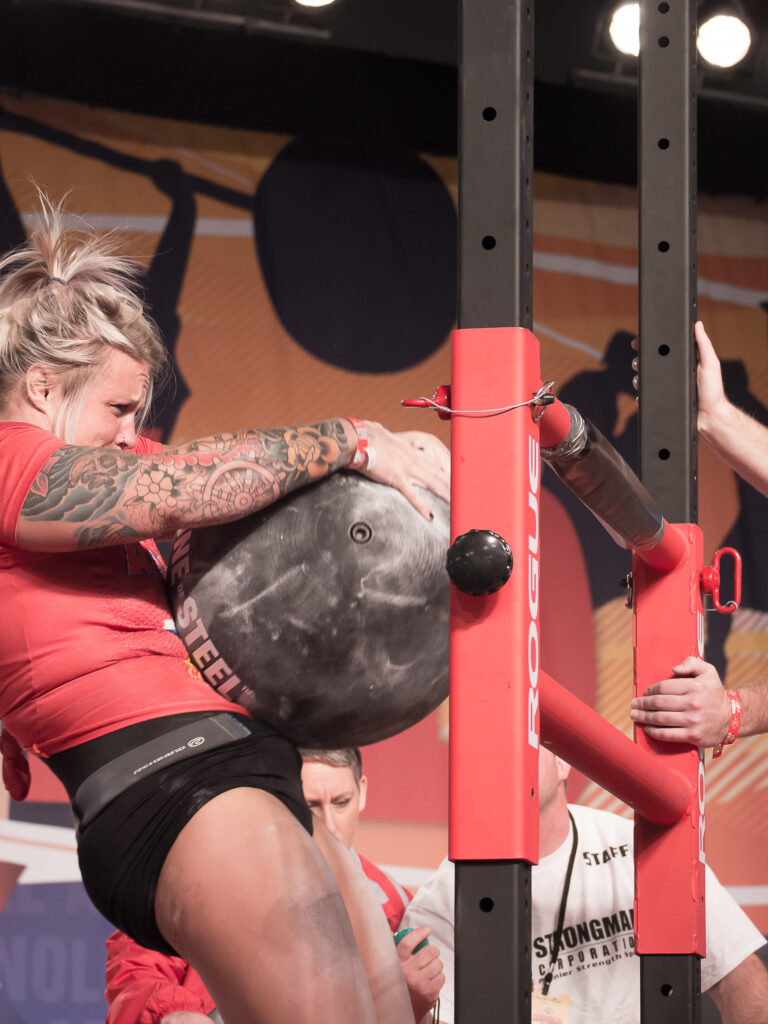 Feel doesn’t win gold medals though; results do. During the Cold War (1947-91) Communist countries wanted a world stage to display the physical superiority of their athletes and they used weightlifting in the Olympics to prove their prowess. Their scientists and coaches worked off the concept that “The body becomes its function.” This means that to become better at something, do it more often and you will adapt faster. Athletes were asked to squat and press daily and began walking away with more and more medals. At the peak of their Olympic superiority, some top athletes from the Eastern Bloc were doing several (4 or 5) mini sessions a day at maximum poundages. 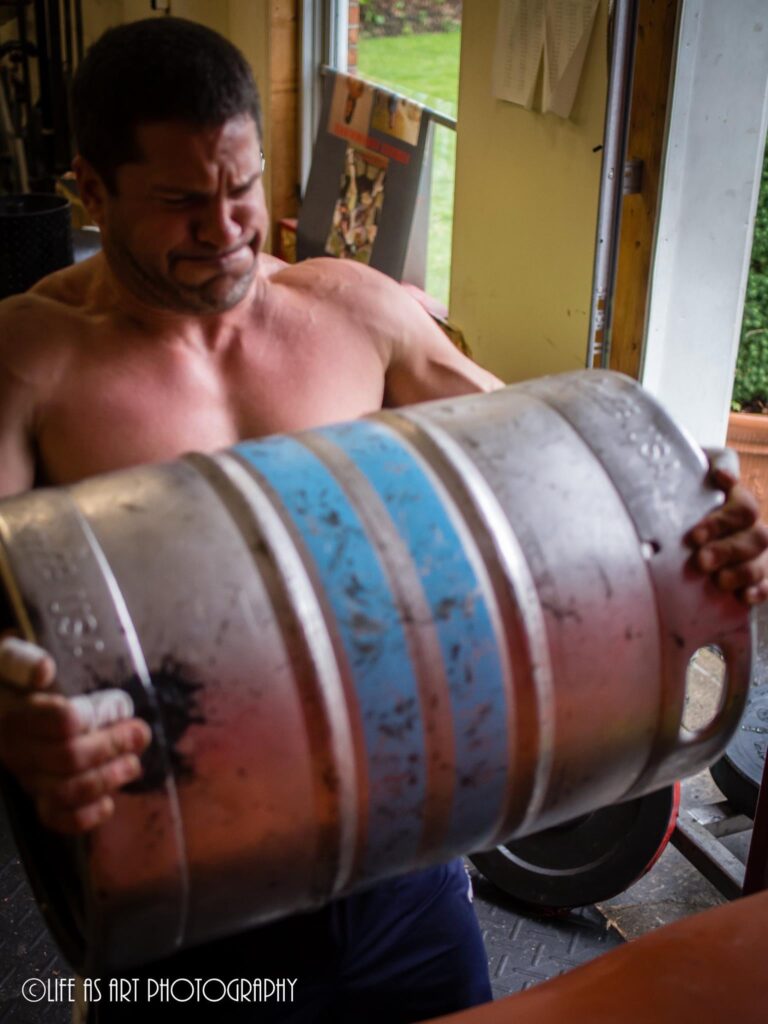 Now these athletes had the very best in food, massage, rest and other recovery techniques to aid them. The common trainee cannot afford this much time in the gym, but the law of diminishing returns shows us that you only need to hit the sweet spot to reap the bulk of the rewards. For most athletes a single session six days a week is sufficient to reach their goals of being a successful competitor.

Now, a Strongman has a lot more to take on than a weightlifter, but the general concept is the same; become as strong as physically possible in the most efficient way. To do this we focus on the basics: squatting, pressing, and pulling. We use a variety of reps in the strength, power and endurance ranges and combine this with timed rest to put an emphasis on the focus of each session. Each session is carefully planned out and precisely followed with only quality repetitions being performed.

You will notice this program (which I’ll cover in depth in Part 2) has you doing the same things over and over again over 12 weeks. The variety is limited and for good reason; you will get better at doing these very specific things that in turn will make you stronger all around. You will also see that your time in the gym is often reduced to about an hour. Typically, this is sufficient for most athletes with an intense program such as this. 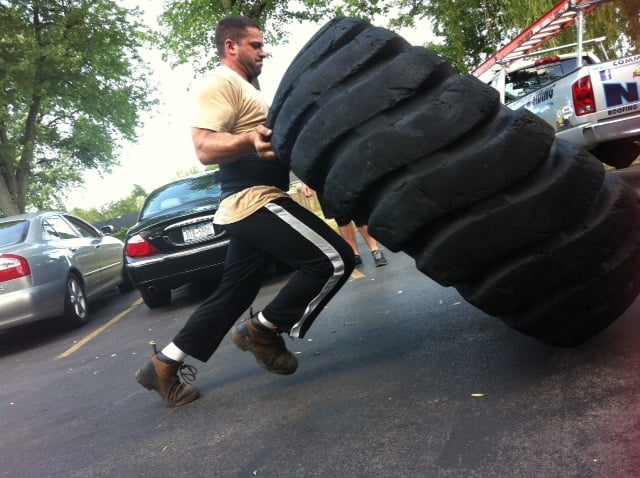 To be concise, we will use the following glossary for Part 2:

Single (1): This is one quality rep performed at or near maximum. There should be no misses. This is not an attempt to hit some number you would like to see but a single heavy rep performed perfectly.

Example: Your best single on the log is 350 lbs. You must perform 5 sets of 1 today. After warming up you hit 330 two times. You know a third is not likely at that weight so you drop to 320 for the next two sets. Your coach says you are gassed but have one set remaining and take one last quality rep at 300. You worked at about 90 to 95 percent for that set and never failed.

Work Sets (WS): The only sets listed in the program are WS.

Warm Up: Perform your favorite full body warm up for about 10 minutes before training. With squats, presses and deadlifts, most people do a ton of sets on the way up. I believe in doing the minimum on the way up as to not become tired doing your WS. In a contest you often get very little warm up time. You should train to get used to this.

Press, Clean and Press, Clean: When you have a press exercise you can chose the bar, axle or log. Choose your weakest exercise or one you have in an upcoming contest. You can also work different exercises during the week, but don’t change it up too much. This program relies on consistent repetition. As the name suggests, you will only do the portion of the exercise listed. All presses are overhead; chest work is specifically noted.