In a public disclose released this morning on their website, the International Weightlifting Federation has reported that fifteen athletes have been provisionally suspended following reanalysis of their doping testing samples from the 2008 Beijing Olympics.

The full list of newly-announced positives is below, along with their weight classes and original placings in Beijing:

This is the first mention of Chinese athletes being associated with failed re-analysis of their drug tests from either the 2008 or 2012 Olympic Games. However, with three failed tests announced, China could potential face a one-year ban from international competition by the IWF under recently announced guidelines. Their weightlifting federation could face the same penalty that Russia, Kazakhstan and Belarus were handed (and potentially Azerbaijan, Armenia, Moldova, and Turkey as well).

Note: While the IWF experienced a website hack last week and announced the site could still be under attack, this announcement appears authentic. We’ll report back if more information comes to light.

A screenshot from the announcement with the substances detected is embedded below. 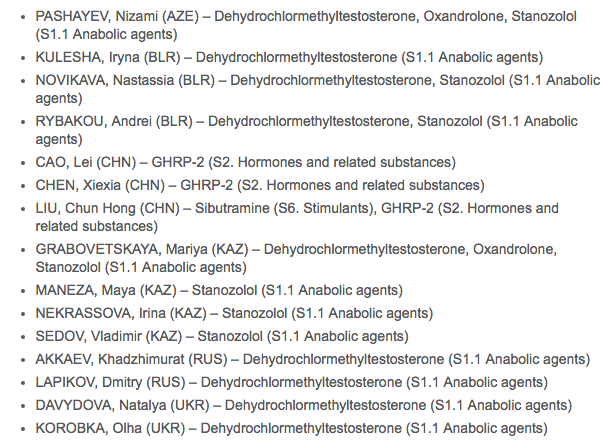 To put this announcement into further context in one category: pending medal reallocation if the provisional suspensions are upheld, Spain’s Lidia Valentin would move up from originally finishing in 5th place in the 75KG category to now a silver medal. Last month she advanced from 4th place to a gold medal after re-testing at the London Olympics, and last week she won a bronze medal in the Rio Olympics.

Canadian athlete Christine Girard will advance once spot and now have a bronze medal in the 63KG category to go along with the Gold medal that she now has after re-testing results from the London Olympics.