In a sport dominated by Russians, American lifter Kim Fox has blazed a trail for others.

In the quiet corners of niche strength sports lies a name you probably haven’t heard, but should. Enter Kim Fox: one of the most recognized names in Kettlebell Sport, a century-old sport where endurance meets strength. It features some of the toughest feats in strength athletics, a blend of strength, technique, endurance, and all-out grit that’s found a large following abroad. And Fox — an American, in a sport long-dominated by Russians — is arguably the most accomplished woman to ever compete.

“To me, Kettlebell Sport is the internal grind of just wanting to drive forward, just to finish,” says Fox. “It’s about learning how to build that internal fortitude, which is really hard for people to develop, because the urge to want to quit is so strong. Keep moving forward – that is essential in this sport.”

Kettlebell Sport — also called Girevoy Sport — is an individual endeavor, where athletes from all ages, weights, and genders step onto a platform to punish themselves for ten minutes.

The objective sounds simple enough: complete as many repetitions as possible in that time, in either the Long Cycle (clean & jerk) or Biathlon (a 10 minute snatch set followed by a 10 minute jerk set, after about an hour of rest), without setting the weights down. Once the bells touch the floor, you’re done.

Ten minutes, non-stop. It tests whether the athlete can hold on, fighting the bodily signals that scream at them to drop the weights.

Traditionally, men performed their lifts in either the Long Cycle or Jerk with two bells, and women would only lift with one kettlebell, called the One-Arm Long Cycle or One-Arm Jerk. (The snatch is completed with one bell for everyone.) Over the last decade, it has become more standardized for women to compete in Two-Arm Long Cycle and Jerk.

For decades, men and women have walked onto the platform, only to crawl off after their ten minute sets, either broken by the pain or forged in that fire. Fox, a member of the Kansas Army National Guard, loves it for that very reason.

“The essence of the whole lift is the internal fight! Do I want it enough, just to carry on? It’s a lot like the soldier mindset – I am just going to keep putting the next foot forward, until we are done.” 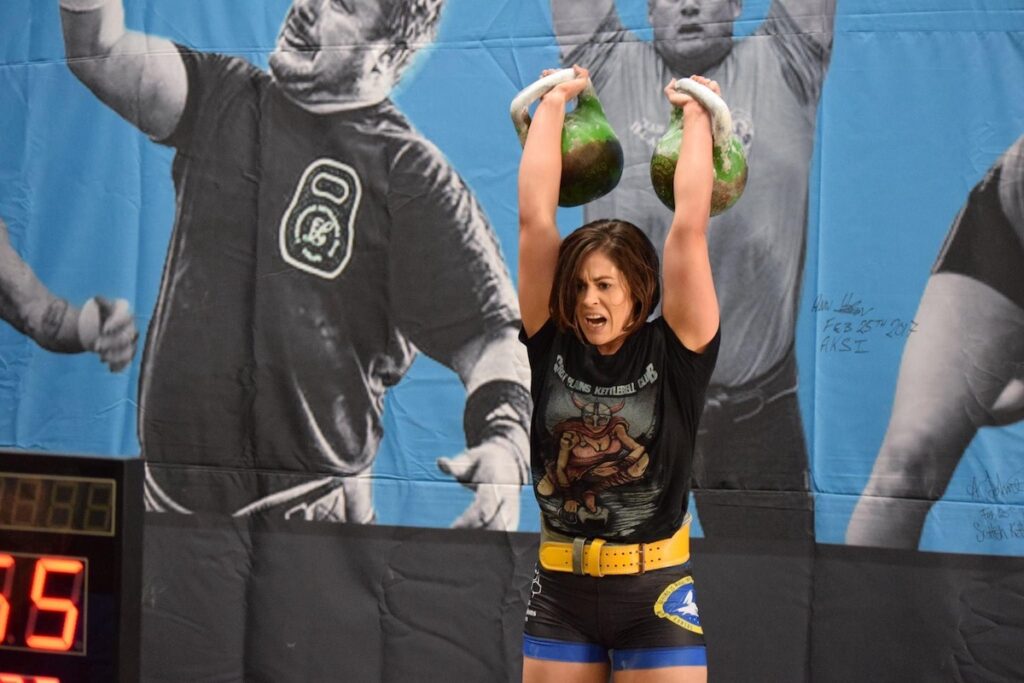 She has also achieved Master of Sport International Class (MSIC) ranking in both Long Cycle and Biathlon, in the 73kg weight class. In 2017 she won the gold medal in the Long Cycle, while competing with Team USA at the IUKL World Championships in South Korea, with 64 reps, using two 24kg bells, making her the undisputed World Champion.

Achieving MSIC requires the athlete to hit a specific number of repetitions, for their weight class, with a specific weight, during a competition. It’s standardized by the particular federation that hosts that event, and the judging is taken very seriously, as only the most elite athletes achieve this rank.

Fox is known for not only accomplishing the achievement of MSIC, but for surpassing it by a significant margin. Her weight class requires 58 reps using 24kg bells in the Long Cycle to reach MSIC rank, but in 2019, she walked off the platform with 82 reps, smashing her previous record from 2017.

Fox didn’t grow up with kettlebell sport, but rather discovered it the way many of us find something we love — accidentally.

“I was athletic when I was a kid, playing a lot of different sports through high school.”

She was active and always lifting weights, but also had a poor diet, which resulted in her initial denial into the Army. “I had to lose about 30 pounds to join, so I got a lot more involved in fitness.”

[Related: The ultimate guide to strength sports for veterans.] 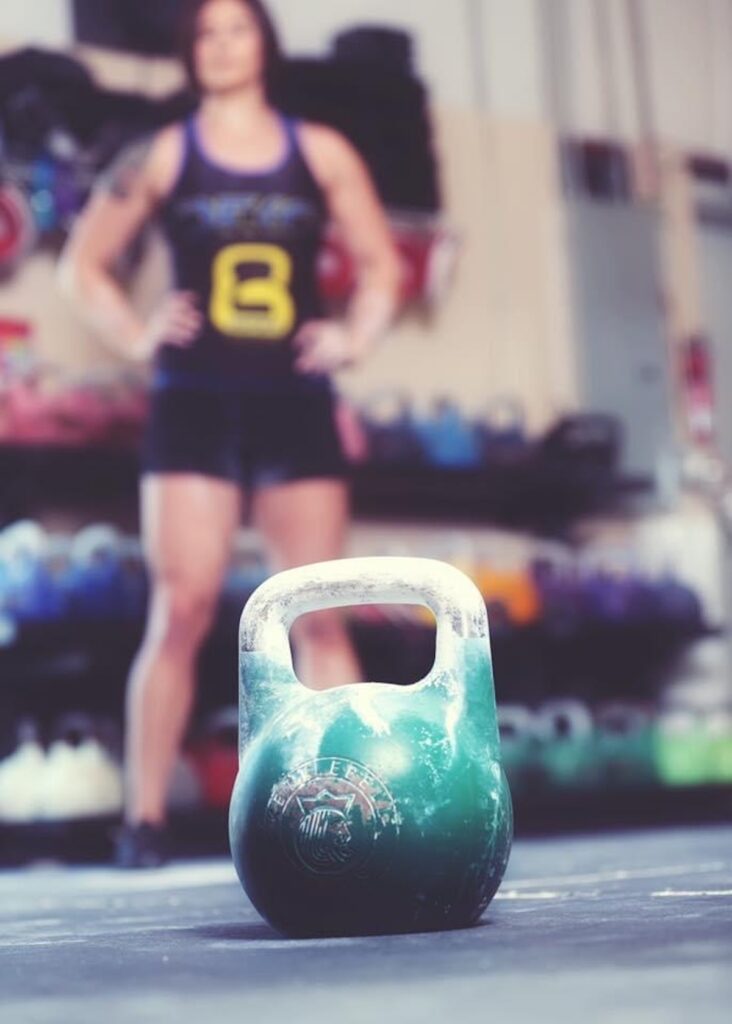 She eventually enlisted in the Army, and after returning from deployment met her husband, Jake, in a kickboxing gym.

“We had a friend named Mike Sanders, who was competing in Kettlebell Sport. He introduced me to it and first started me snatching. I wasn’t very good at it, but it helped me fall in love with competing again.”

Fox talked about how it was hard to find sports that she could compete in, as an adult, and found the competitive nature of Kettlebell Sport filled that gap. Later she started training in Long Cycle and began using two bells.

[Everything you need to know about the history of the kettlebell.]

So how does the greatest female athlete in Kettlebell Sport train to win so many World Championships? She does it with help from one of the best coaches in the game: Arseny Zhernakov, a Russian Honorary Master of Sport.

She explained that typically, an athlete should spend at least 15 minutes under the bells, per training session. This could be doing short intervals or longer sets to build your endurance. “It’s kinda required to get that time under the bells, to put you 30-40% over what you’d do in competition.” 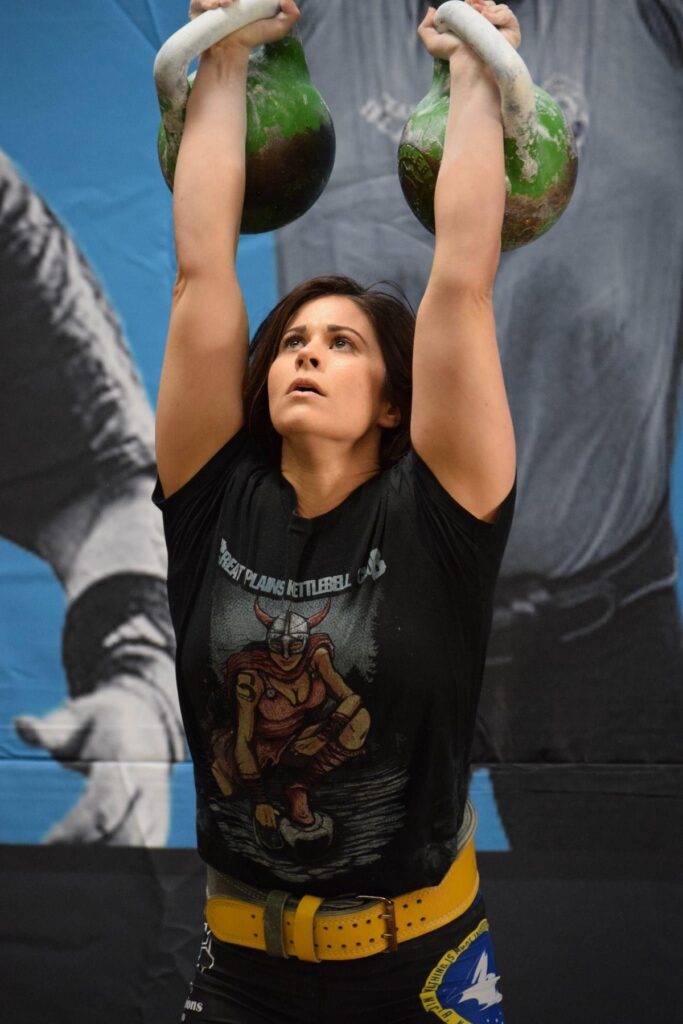 This might sound simple enough, but the repetitive nature of the sport forces you to have perfect technique for every single rep, or you’ll be spending the time training to learn your weaknesses.

Fox said that even if she’s competing above the professional weight of two 24kg kettlebells for women, she always maintains the same pace of 8 reps per minute (RPM).

“In 2016, a friend asked me to come to Denmark, for a competition. I had just competed doing a 24kg set, and my score likely would’ve been the same, in Denmark. So, I talked to my coach and suggested doing a 28kg set and we trained for that.”

Normally Fox would adhere to the same pace she always keeps, but because of the heavier load, she dropped the pace. “I trained only about 5-6 RPM with that weight and it destroyed my 24kg set pace. It changed the adaptations I made with my mitochondria and lactic threshold! I went and did the competition and got about 44 reps with the 28kg bells, but my return to the 24s was terrible.” 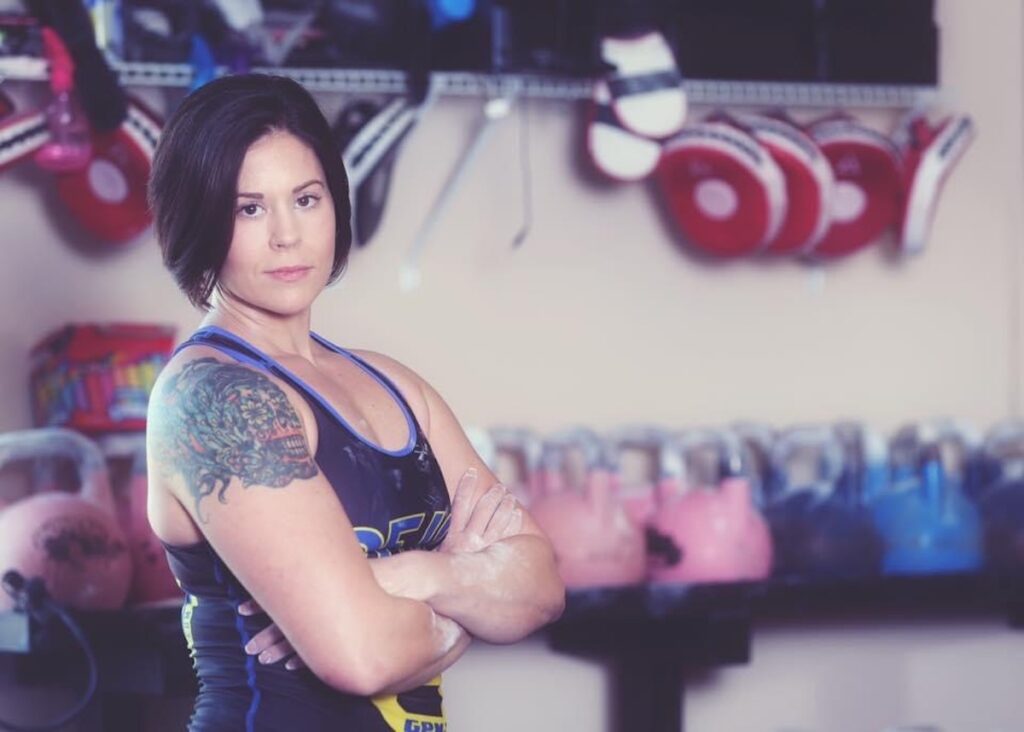 Fox, like many athletes, has mentioned how the last several minutes are the most exciting of the sport. This is where you truly see if the thousands of reps and hundreds of hours of training actually paying off for the athlete on the platform. Fox says the Kettlebell Sport community thrives on those final moments and the enthusiasm isn’t left for one individual, but for every lifter.

“The sport’s community is known for being one of the most accepting and welcoming that I’ve ever seen, and it’s not just like that in the US. Even when I went to worlds, you’re thinking, ‘Well, it’s different countries, so it’ll be more aggressive’ but it’s not! It’s so welcoming and you just don’t see that in other sports. I also think it’s one of the few sports where you can also talk to some of the elite athletes and they will more than happily talk to you and help, and I don’t see that in many other sports.”

If you find yourself at one of these events, and happen to see Kim Fox, take some time to say hello and ask her a couple questions. Maybe if you take her advice, you might actually follow in her footsteps and be an Absolute World Record-holding athlete, or just happy to be competing again, discovering something the way many of us find something we love – accidentally.