As a weightlifter, a lagging front squat is about as nagging as something can get. Recently, I was able to power clean nearly 88% of my clean, for a triple, on an OK day. According to Ursula Garza Papandrea (2-Time National Champion Weightlifter, 2-Time Olympic Festival Champion, 5-Time World Team Member, Former Record Holder, and the Technical Director of USA Weightlifting Board of Directors) and Greg Everett (Head Coach at Catalyst Athletics and Co-host of Weightlifting Life Podcast), a lifter who can power clean upwards of 85-90% of their clean is generally regarded as (1) a strong pullers, obviously, and (2) they tend to have a strong proficiency for technique in the pulls of the clean.

That said, I was left to come to terms with my lackluster front squatting ability, and had to take a deeper look at what was the disconnect that was hindering my front squat performance.

For many lifters, this may not be an issue, however I do feel confident that there are plenty of us less fortunate ones who struggle with a lagging front squat in relation to our overall squat strength and power lifts (power clean, etc). 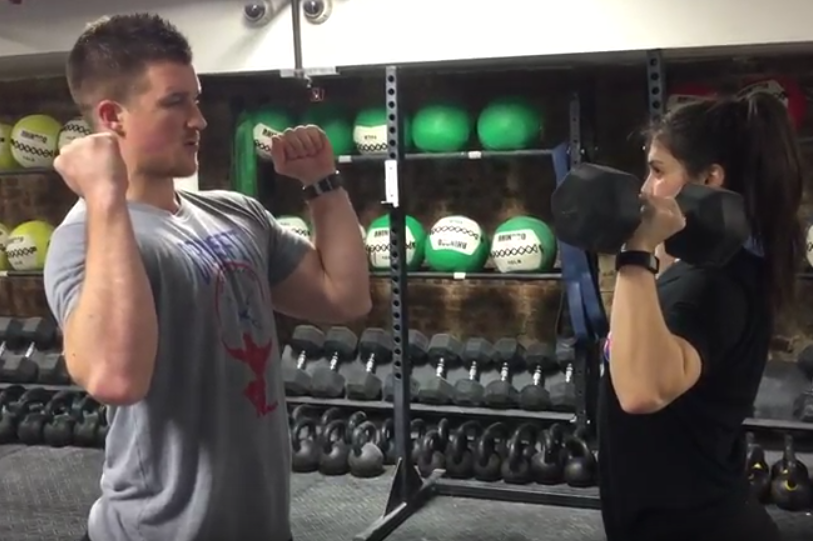 Assistance and corrective exercises can play a critical role in lifters who may be in this precarious position, as a mere vendetta to front squat until our legs fail to straighten can actually do more harm than good.

Over the past few months, I have taken a deeper look into some movements that may help the less fortunate front squatters (and yes, even the more capable ones) to:

Below are three movements that can be done during warm-up sets or assistance training to develop positional strength, increase muscle mass, and address muscular weaknesses specific to the front squat. It is important to note that these three movements in no way or fashion replace a sound squatting program, as Everett suggests a lifter’s max clean and jerk can be between 125-135% of the squat, which demonstrates that the issue may very well be that squat strength is too little to progress further.

In the full version of a waiter carry, a lifter simple packs their lats and stabilizes the scapula while locking out one arm overhead while loaded. Personally, while the full version is a great exercise, I feel that performing partial waiter carries offers specificity to the front squat. In this exercise, the lifter will be able to maintain a tight, upright torso with slight pronation and elevation of the scapulae with potentially significantly higher loads than the full overhead version. The payoff of this exercise is that it teaches stabilization of the shoulder girdle and scapula while in an protracted and elevated position and stresses both muscular and neuromuscular adaptations, which is exactly what the front squat rack position entails. Additionally, by performing this partial carried one-side at a time (unilaterally), you are able to address any asymmetries and potentially increase muscle activation more than doing the bilateral movement.

Strength and force production has been shown to be angular specific (as discussed and documented by Dr. Andreo Spina), meaning that at a certain point (perhaps a sticking point), there is a weakness that can be specifically addressed only if trained within roughly 10-20 degrees around that particular joint angle. By looking at your front squat, you are able to determine at what point of the movement you have the most difficulties applying force (such as a sticking point). By performing partial reps, such as ¼, ½, or even front squat to parallel or SLIGHTLY ABOVE (which is my case is my breakdown, specifically at about 100-110 degrees of knee flexion) you can train the motor units to contract harder, faster, and in unison to optimize force output at and directly around a sticking point.

Sometimes strength is limited by the lack of muscular development and hypertrophy. When looking to increase leg strength, assistance exercises can play a beautiful role in the process. The belt squat, which you may have seen in social media fails, is a great exercise to increase training volume to the quads, take additional strain and loading of the back (which as weightlifters, this is highly beneficial in times of increased training volume), all while pattern a more vertical descent and torso angle similar to that in a front squat and clean (receiving phase of the barbell). Adding these in preparation blocks and/or increase training volume periods can impact a lifter’s overall legs mass and strength potentials, and pattern a more vertical squat, all of which can increase performance in the front squat and weightlifting.

These three exercises were chosen due to the simplicity and direct application to the front squat rack and squatting positioning. Lifters can easily perform these movements in warm-up sets and/or after main power and strength blocks to increase muscle mass and address asymmetries. As stated above, overall squatting strength may very well be a culprit to this dilemma, and therefore coaches and athletes should additionally review the performance of the clean and jerk/power clean/front squat and how they compare to overall squat strength.