Meet the CrossFit® Athlete Who Gave a Kidney to His Coach

What’s your definition of a selfless act? Would you classify giving a kidney to a fellow strength athlete as selfless? Because that’s exactly what one CrossFit® athlete did in Muskegon, Michigan. Over Christmas break, Codiee Lofquist, a coach at Muskegon CrossFit, and member Deron Hunter underwent surgery together.

Before the holiday season, Lofquist had found out that he was in need of a kidney, and soon after hearing the news Hunter realized they had a matching blood type. Once he learned this fact, his reaction to the matter was a no-brainer, “It was immediate. As soon as I heard he needed a donor, and I was his blood type, I called the hospital the next day to get the ball rolling.” 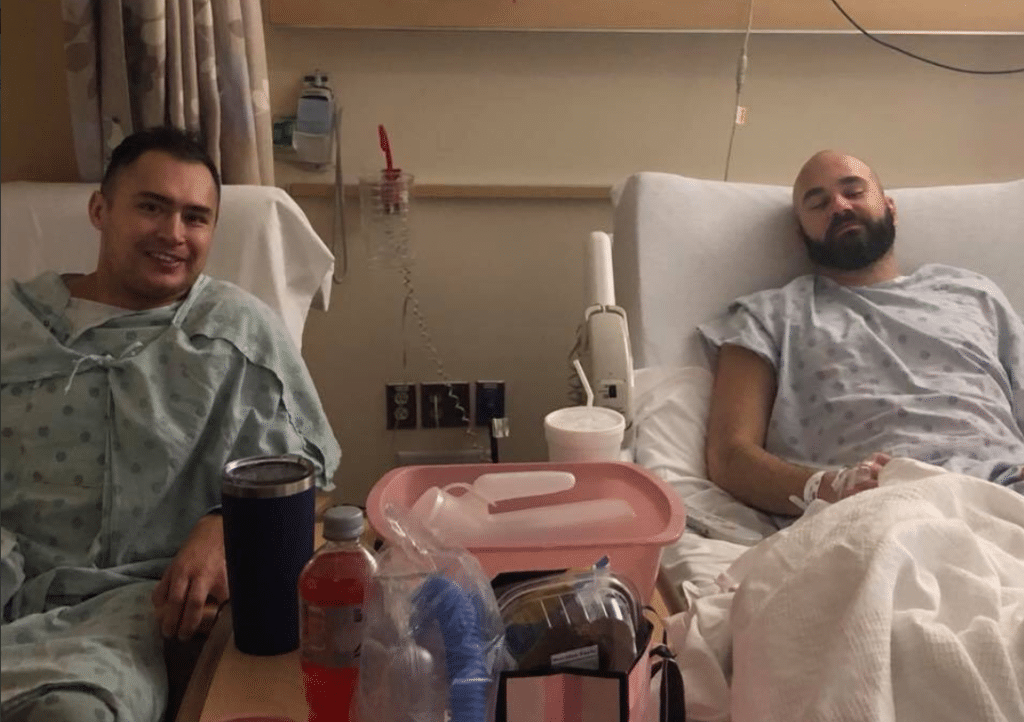 And to give additional context Hunter added, “Although I’d like to think I would have done it for anybody, it was an easy decision to help Codiee. Not only is he a friend and somebody I respect, he’s also a Marine; he’s already put it on the line for all of us. He’s selfless in other ways as well. Quick story: My truck broke down about 4 hours away (Gary, Indiana, of all places), at 11:00 on a Sunday night. As I’m trying to figure out what to do – Codiee texts me, and offers to come down and either help me fix it, or come pick me up.”

When I first saw the re-tweet by the CrossFit Games Twitter on December 21st, one of my first thoughts was about Lofquist and Hunter’s relationship before the surgery and if Hunter was nervous leading up to it. Hunter told me, “We were pretty close. Our box started out pretty small, and the OG group really became some of our closest friends – going out on the weekends, hanging out at the lake on holidays, etc. Inside of that group, I think Codiee and I were pretty close as well.”

“Nervous? Sure. I’m a Christian man, so I’m not afraid of dying – that said, I’m in no rush. They say the odds are about 1 in 1,000 that a donor would die on the table – those are pretty good odds, but that’s always in the back of your mind none-the-less. I’m also allergic to basically all the good pain meds – so I knew it was pretty much just Tylenol – and I was unsure what to expect from a pain level. All the docs told me I’d have to take some sort of narcotics, which all make me terribly sick. Thankfully, I didn’t end up having to.”

Muskegon CrossFit coach Russell Mock also provided background into who Lofquist and Hunter are as athletes. He stated, “Codiee is the strongest guy in the gym but doesn’t go out of his way to show it. As a coach he is low key but has great rapport with our athletes. Deron is that athlete that comes in and does the work. Never complains, never takes short cuts, and only ever adds to the class.”

Like other strength-focused gyms, CrossFit boxes tend to create a sense of community within them, a family feeling and community vibe. I asked Mock if he thought this selfless act was a reflection of what CrossFit tries to emulate with the sense of community in boxes across the globe. He responded, “Absolutely! Whether it is a tough WOD or a tough patch in life I always see our athletes supporting each other in one way or another.”

Hunter felt similar to Mock on the CrossFit community topic and stated, “Sure. Although I think I would have done this for any of my friends, I think at most random globo-gyms, people rarely know each other’s names – let alone develop the types of relationships and friendships that CrossFitters do. Our CrossFit friends have become some of our best friends. I’ve never heard of people, other than CrossFitters, hanging out with friends from their gym. In fact, people always act like we’re weird when we say that.”

To wrap up my talk with Hunter I asked him if the surgery had changed the dynamic of his and Lofquist’s relationship. He said, “You know, I don’t really think it has changed much. I mean, obviously Codiee is grateful, and we text each other quite often to see how recovery is going – but that’s about it.”