Official Strongman made an announcement a few days ago that left every aspiring strongman and woman looking at flights to North Carolina. This news that has caused waves in the strength world is that they will be hosting — along with Train Strongman — a World’s Strongest festival, to be held in North Carolina this December. The show will have 7 World titles on offer, and even a qualifying spot for Giants Live.

Let’s be honest: we all grew up watching World’s Strongest Man on TV and wanted nothing more than to be given a world stage to pull planes and flip tires just like the athletes on our screens. 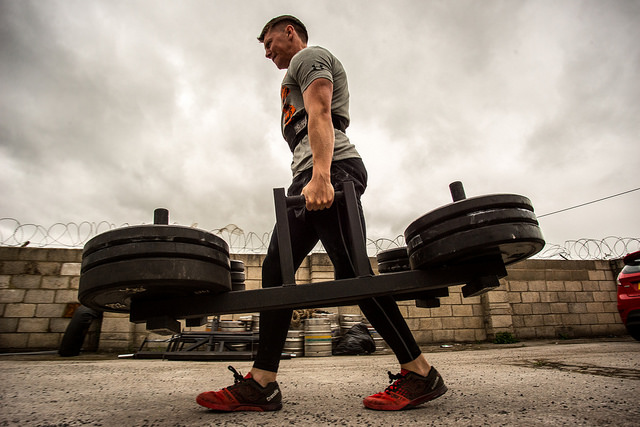 Until recently, that was nothing more than a fantasy for all but a select few 6ft+, 180kg monsters (and Lalas). That’s not to say though that there weren’t competitions for the lightweights and women. There most definitely were, but despite some fantastic efforts from promoters, they’ve never been shown the same love by the higher ups in the sport. Hopefully this festival could be the first step in the right direction to making that a reality.

The big boys (superheavyweight/open men) haven’t been left out either, but they instead will be competing for a place at Giants Live, which is in turn a World’s Strongest Man Qualifier.

Official Strongman attempted something of a similar type last year with their Official Strongman, European and North American Championships. Both these shows were again a great start, but with only two events – a max log and deadlift – it missed out on the nuances that make strongman so exciting. This show, however, appears to have rectified that missing element, and knowing the guys involved, especially Aaron Molin, I’d expect this to be a heck of an event.

Qualification couldn’t be simpler, as a big part of Official Strongman’s philosophy is that as long as you have access to basic strongman equipment you should have the opportunity to show what you can do. As such the qualifying process is entirely online and consists of just three events.

The Deadlift – Total Tonnage in 30 seconds

Though the total tonnage in 30 seconds isn’t exactly classic strongman, it is at least interesting to see OSM move away from the one rep maxes they started with. The rules for this appear to be remarkably simple: max reps at a weight of your choosing with every rep coming to a dead stop on the ground and your score being reps completed (I’m calling Colin’s final rep out…) multiplied by weight on the bar. Belts and straps, etc. are allowed, though suits are not. Hitching isn’t mentioned in the video, but this is still strongman, so I imagine that’s still allowed.

Hopefully a plethora of differing theories will arise about the best weight to pick for this event over the coming months. Personally though I’m looking at it as a continuous fifteen rep max with a time cap. The time frame is just too short for any more reps, as in reality there are very few people who could maintain a pace faster than two seconds per dead stop rep regardless of weight. My advice for all three of these events is to use fractional plates wherever possible as there will likely be a lot of people getting roughly fifteen reps at each standard weight. So if your gym has fractional plates, put your ego to one side and throw them on the bar, that extra kilo adds up over 15 reps.

This event I really like: beautifully simple and a near perfect test of pressing power. Clean the log from the floor to your shoulders once, and then any way you please get the weight from yours shoulders to locked out overhead three times. This can be a push press, a jerk, or a strict press if you are feeling strong. Really there are no special tactics or tricks, just go as heavy as you can and try to get all three reps.

While the other two qualifier events are relatively standard practice, this one is a little outside the box. Basically it’s a max weight farmer’s walk for 100ft with a turn at the halfway point, heaviest weight wins, with time to be used to separate tie breakers. It gets complicated though at that halfway point, as only one foot has to ‘break’ the line at the other end, making a big part of this event just negotiating that turn.

If you have little or no experience at taking turns with farmer’s walks, it’s something I would recommend spending a lot of time practicing, as that awkward turn will catch a lot of folks out. We gave this a go this week, and that turn really is the game changer. After a couple of attempts the technique that seemed to work the best was to go into the corner slow and wide, then not speed up until the handles have settled again.

As weight is the key factor here I’d almost entirely ignore the time element of this event and focus solely on going as heavy as you can (slap the fractional plates on, too). If you have access to multiple farmers then you might want to select the shortest handles you have as the longer they are the harder that turn is going to be.

There you have it: the three events that you need to master to make it to World’s Strongest Man.