5 Powerlifting Lessons From a Zen Monk

As a lay zen monk with the Kwan Um School of Zen and long-time lifter of all things heavy, it has thrilled me to see so many articles about the benefits meditation has on the strength athlete. I have even given Dharma Talks (think “sermon” but more zen, less Bible) on this very topic. So it may surprise you that this is not another article about the benefits of meditation for the lifter. (We’ve already got one of those here.)

Instead this article is about Zen Buddhism as it relates to the strength athlete.

First, a quick primer on Zen Buddhism. “Zen” is a translation of the Sanskrit word “Dyāna,” which means “meditation.” As the name might suggest, Zen Buddhism emphasizes rigorous meditation practice as a means of developing insight, as opposed to focusing on book learning and mere knowledge. You are encouraged to interact with experienced leaders but basically, it’s less about what you’ve learned in books and more about what you’ve actually experienced yourself.

Much of that mindfulness stuff that you’ve been hearing about came from Zen — the man often deemed responsible for the “Mindfulness Movement,” Jon Kabat-Zinn, was a student of Zen Buddhist teachers Zen Master Seung Sahn and Thich Nhat Hanh.

Anyway, if Zen is about meditation and this isn’t another meditation article, what are we talking about? Well, you remember how I said zen is about developing insight? That’s what this article is about: the Zen Teacher’s Insight into Lifting.

Here are five lessons from zen that I have applied to my lifting practice.

Hey look at me getting my long robes and bowls!

1. The Importance of the “Don’t Know” Mind

“A beginner’s mind is wide open and questioning. An expert’s mind is closed.” – Suzuki Roshi

We have a huge bias towards knowing and knowledge. We study, we search, we ask questions: What’s the best program? What’s better: sumo or conventional? Five reps of ten or ten reps of five?

Let’s put it all down. Throw it away. Return to zero — you can’t fill a full cup. Be a beginner. Not necessarily in our training, but in our approach to what we are doing in the gym and how we respond to a new coach.

It’s unfortunate that Nike took over this phrase because it works so well here. In Zen, this concept means whatever you are doing, just do that. When washing the dishes, just wash the dishes. When driving, just drive. When it is time to deadlift, just deadlift. There was a thread on Reddit about what you listen to in order to get pumped for a deadlift. My response was, “just lift.”

I feel like a bit of a caveat needs to be given here. Let’s take the deadlift as an example. If you have found that your hips are shooting up early and that you need to focus on the right cues, don’t confuse yourself by trying to keep a “don’t know mind” and “just do it” because you might get hurt.

Both of these statements, as well as everything in this list, are simply meant to point you in a direction. “Just do it” means, “focus on what you are to be focused on.” Don’t have your mind wandering when you need to be engaging your body. It also means, “follow your programming.” Which leads us to…

That’s a quote from Brad Warner, and every bus driver in the history of forever.

In case you missed this reference, it’s to meditation. Every time I go and speak with my Zen teacher she asks me, “How’s your practice?” In the strength world, I would ask, “How’s your training?”

This question is meant to get you to stop and do a self-check. There is no need to provide an answer. Instead, listen to yourself. How is your training? Don’t forget to take stock of your progress, in each and every lift and with regard to how you feel between workouts.

Your foundation must be strong. You know what to do. Now sit down and shut up.

Story time: Two monks were arguing about the temple flag. One said the flag moved, the other said the wind moved. The zen master overheard them and said, “It is neither the wind nor the flag, but your mind that moves.” Me, I’d say there’s a lot of lips moving, but this story is a good illustration of interdependence. All three are wrong and yet all three are right. The flag moving in the wind is conditioned on not one but each of these factors, and it’s the same thing with your lifts.

Remember above when I asked you all of those questions? As a strength athlete, there are many factors that go into your performance. It comes to no surprise to those of us who have been lifting a while that things like sleep, stress, and proper nutrition can have profound effects on our time under the bar. Everything is connected. Everything arises from everything else. For the strength athlete, there is nothing that isn’t training.

No, this is not a misspelling of your favorite feline friend. Rather it’s a shout that is described in Zen encounter stories, representing a kind of verbal harshness. You’re meant to think of it like being hit with a stick or burning your mouth with your first sip of coffee. At that moment, the only thing that exists is the hit. All likes and dislikes disappear. The mind is clear, reflecting only the hit, if only for a brief moment.

What I’m saying is that we should keep “Katz” in mind when we lift. That mixture of emptiness and focus that comes when you’ve stubbed your toe or burnt your mouth, that time when the sensation is the only thing that exists for you — that’s the kind of mindset you need when you’re lifting. There should be nothing but the lift. All likes and dislikes disappear. Only the lift exists. The lift and the lifter are no longer two.

So I have given many talks about Zen and where I feel they are the weakest is in the conclusion. I’ve been told that the conclusion is not for me to spell out to the listeners but rather for the listeners to draw themselves. So I shall end this the way I always end my talks: Thank you for practicing with me. 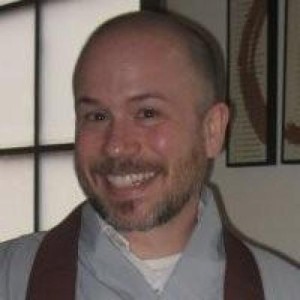 A Kansas City, MO, native residing in Lawrence, KS, Blake Wilson is an ordained lay Zen monk (also known as a Dharma Teacher) with the Kwan Um School of Zen, an avid lifter with a focus on powerlifting, and a big ole geek.He has written on Zen for Elephant Journal and has delivered a multitude of talks on Zen and lifting. When not lifting or zenning, he teaches all aspects of legal research at the University of Kansas School of Law where he is a faculty librarian. He has a Bachelor’s in philosophy, a Master’s in information science, and holds a Juris Doctorate (J.D.).

Check Out Jessica Buettner Deadlift 3x Her Bodyweight For a Triple

Finally, a Feature Film About Weightlifting: How You Can Get It Made