The deadlift is one of the best exercises for building muscle, strength, and all around athleticism. This lift involves some of the most animalistic traits humans possess, which are raw strength and power. It’s modern man’s (& woman’s) way of fluffing their feathers and asserting dominance, grit, and innate ability to provide.

This article isn’t intended to claim one is better than the other in terms of back strength or record legitimacy. Save the sumo versus conventional deadlift debate for the comments section.

For this article we’ll cover the kinematic difference between the lifts and when to use each.

Excellent Form Examples of Each Style

Below are two excellent examples of a conventional and sumo style deadlift. Form will always be/look a little bit different from person to person due to anthropometric differences, but these videos are great to utilize when beginning to analyze your pull.

While there are visual differences between the two forms there are some similarities. These include: set back, engaged hips/lats, tight core, neutral head posture, and the feet fully gripping the floor. This list can go on and expand as form gets broken down even more, but these are the major cues to keep in mind when starting.

In come kinematic differences and the rates at which our muscles fire. The sumo deadlift relies on recruiting the hips, glutes, and legs to initiate the first portion of the pull, while the conventional has a more equal balance between the lower back and hamstrings.

Each pull hits similar muscles throughout their full ranges of motion. In fact, a study conducted in 2002 found only a few differences between each deadlift and the rate at which different muscles fired. Researchers used electromyography (EMG) ratings to record muscle fire rate and tracked 16 different muscle sites. 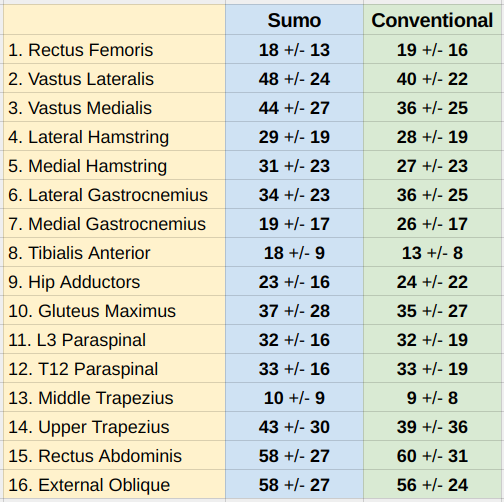 Of the above data there are four muscles that show somewhat of significant differences. First, the vastus medialis and lateralis (outer/inner quad muscles) are higher in the sumo pull, which makes sense as this pull incorporates more legs and a slightly more forward lean.

Second, the tibial anterior and medial gastrocnemius are different in each pull, which suggests the posterior and anterior portions of the lower limbs are differently engaged between both styles.

Another cool EMG observation this study made was the difference in muscles firing when wearing a belt and not. To no surprise, researchers found that not wearing a lifting belt made a significant decrease on the rectus abdominis and external oblique fire rates. If you’re ever wondering, “Should I wear a belt?” check out this article.

When Should You Use Sumo Versus Conventional

This above statement is such a loaded question. In reality, a strength athlete can benefit from – and in most cases – should utilize both styles of deadlift. To help me answer this big question I reached out to two strength coaches known for working with some of the strongest athletes in the game: 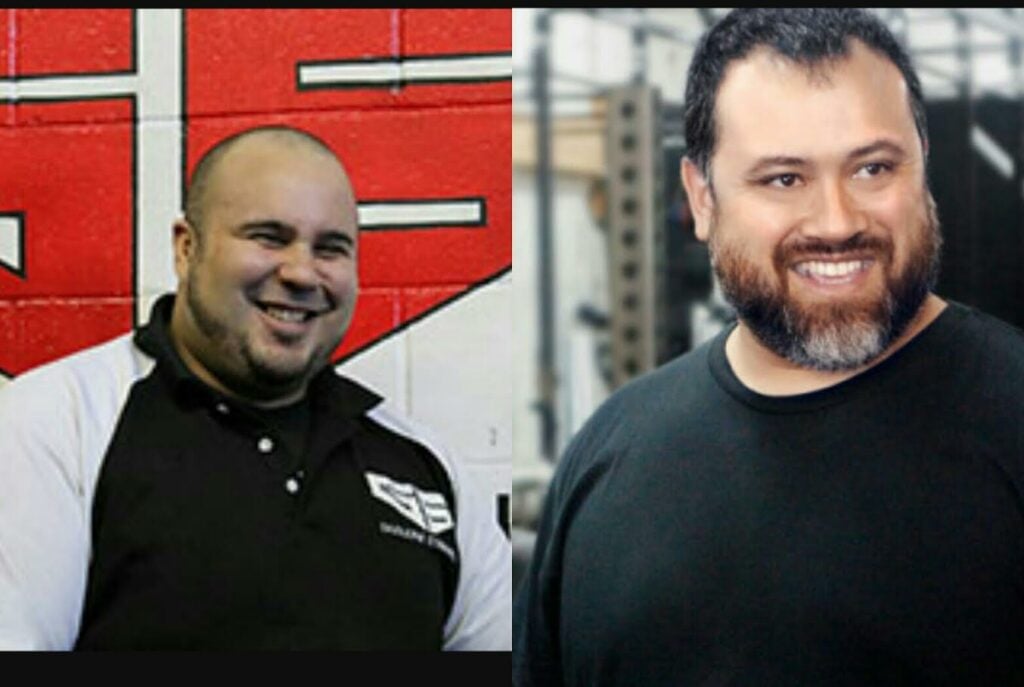 I asked each coach two big questions. The first question was…

1. As a strength coach, how do you choose whether someone should conventional or sumo deadlift? Do you make the call or do you let the athlete decide?

John Gaglione: I let my athletes experiment and decide what feels comfortable to them. I will offer advice on what I think looks mechanically better for their body and leverages, but at the end of the day the athlete needs to be comfortable and confident in the stance and form they decide to use.

If you answered yes to both questions you should probably stick with that stance.

If you are a competitive powerlifter you goal is to lift the most amount of weight possible. So that should be your number one deciding factor.

Both will require a degree of leg (quad) upper back (traps, lats, etc) and overall core and grip strength. So maybe your from is up to snuff but your stabilizer muscles or supporting muscle groups aren’t strong enough for you to truly express your strength quite yet.

Paulie Steinman: As a rule, unless there is a glaring anthropometric issue, I will start the lifter off with conventional. Ultimately I want the lifter to use the setup that will allow them to lift the most amount of weight as efficiently as possible. That may end up being Sumo. Sumo is just as hard as conventional.

I don’t ever want a lifter to pull sumo because they are taking a shortcut to lifting more weight. The best form is often not immediately apparent and it also depends on how long the lifter has been training. I don’t ever let a lifter use a particular form or technique because it looks cool or they see their favorite powerlifter pulling that way on Instagram.

Jake Boly: Do you have any methods or coaching techniques that you employ to test an athlete that you think may be suspect of that specific scenario?

Paulie Steinman: It’s not very difficult to test an athlete that I think may be suspect of that specific scenario. I’ll go after the mental component and I’ll ask them why they think that sumo is that the way that they should pull. I’ll take over if they don’t have a good answer. If I am feeling patient, I’ll explain that it’s a long process for a lifter to get comfortable with their form.

It rarely happens overnight. So, at best, what my lifter is seeing is usually the result of years and years of practice and tinkering. At worst, it’s just crappy technique and there is not much to learn from it. There not much sense in trying to copy that. It’s like trying on someone else’s well worn pair of shoes and expecting them to fit perfectly.

2. Are there ways a strength athlete can test to see which deadlift they’d be better at?

John Gaglione: When switching stances or trying a new it is best to start with lighter weight and higher reps off blocks or mats and work your way down to the floor in order to build strength while ingraining proper position.

That being said let’s pose this situation. Perhaps you are stronger conventional at this time but your sumo looks a lot cleaner mechanically.

If you can move cleaner in a particular pattern you will be able to train the lift with more intensity, volume and frequency which will allow for greater strength gains in the long run.

In either stance it is very important to move the barbell in a straight line of the mid foot. If there is excessive lateral movement as the bar travel up the body you will never be as efficient and by able to truly express your strength to the fullest on the platform. You need to find a stance and technique that allows for the straighter bar path.

Focus on what you can control and not what you can’t. If you are a competitive powerlifter use the stance that is going to give you the highest total at the meet.

Paulie Steinman: I don’t have any specific tests beyond my eyes, the bar speed, and feedback from the lifter. Very old school, I know. I think that the lifter should lift with their competition lift at least 80% of the time since it is also a skill that they are developing.

The balance of the time can be used for the alternate version of their deadlift. It also depends if the lifter is competing equipped or raw but that can be another conversation too.

Both the sumo and conventional deadlift can be used to support athleticism, strength, and power in athletes. Each deadlift will target similar musculature, but will vary in certain areas dependent on the way each move is initiated.

If you’re a competitive lifter, then utilize your competition stance more often. For recreational strength athletes, the utilization of both a little more equally can be beneficial.

Benefits of sumo deadlift and benefits of conventional deadlifting vary, but they each have their place.

If you’re still having trouble deciding between lifts, then test both of them out, and use some of the tips referenced above to help decide.