The Truth About Rhabdo: You Really Can Exercise Too Much

If there’s such a thing as the boogeyman of the fitness industry, it’s rhabdo. You could even take that statement literally, since many functional fitness gyms (and occasionally the CrossFit Journal) are adorned with images of Rhabdo the Clown, a musclebound harlequin who makes “It” look like a children’s entertainer.

Like a lot of boogeymen, it’s shrouded in fear and mystery, which only increases its power. So what is rhabdo, and how do you avoid it?

Basically, rhabdo happens when muscle damage is so severe that the muscle breaks down and pieces of it wind up in the bloodstream. Because certain intercellular parts of the muscle, like the protein myoglobin, are harmful to kidneys, perhaps the biggest risk with rhabdo is kidney damage or kidney failure. 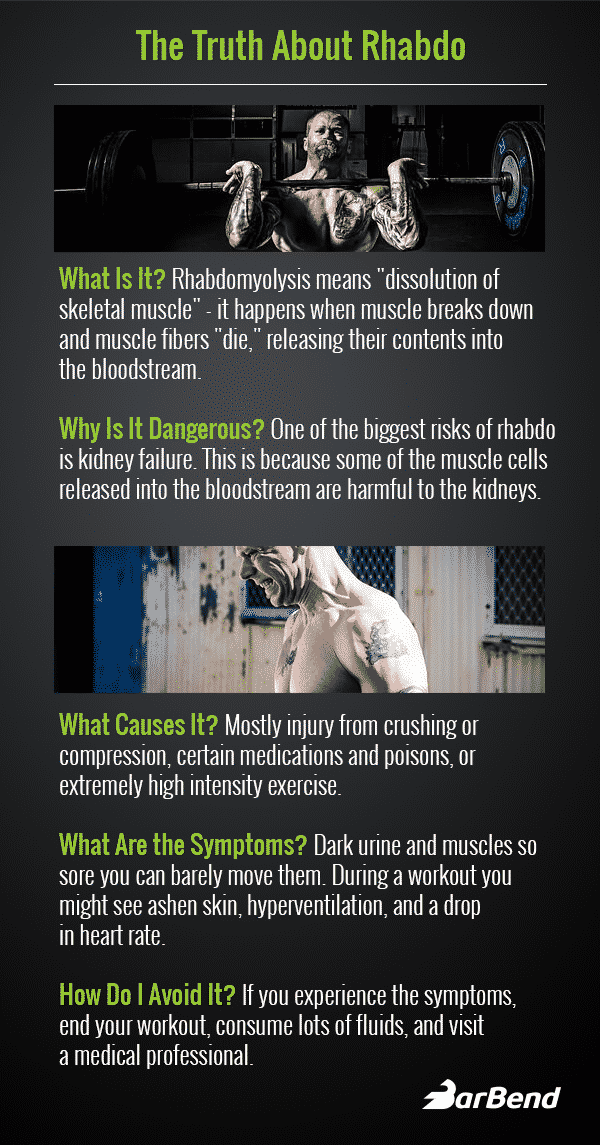 Traditionally rhabdo was caused by things like crushing injuries, snake bites, certain infections, or torture. But very, very, very intense exercise can also cause it, especially in hot temperatures and when the athlete isn’t well hydrated. (This gets called “exertional rhabdomyolysis.”)

This used to be the kind of exercise that was reserved for the elite members of the military or victims of movie villain football coaches, but yeah, elephant in the room: sometimes (as referenced in a study titled “Exertional and CrossFit-Induced Rhabdomyolysis”) it’s caused by high intensity training many folks do in their local gyms.

“The difference with functional fitness is they’re combining intense strength training with very high cardiac output,” says Amato. “If you run real hard for an hour and a half you’re probably not going to get rhabdo. If you go do fifteen sets of hang cleans you’re probably not going to get rhabdo. It’s when you’re combining all that, you have increased heart rate, increased muscle breakdown, decrease in muscle glycogen and creatine all at once, that’s kind of the perfect formula for it. Olympic lifts are hard enough to do right on their own, let alone for fifteen reps, then four other exercises, then you sprint outside for sixty seconds.”

That’s not to say that functional fitness workouts are inherently dangerous; rather, it has a lot to do with the mentality behind them. Pushing yourself is good, pushing yourself too far is bad. It’s hard to know the difference, and one of the reasons exertional rhabdo is often seen in intermediate or advanced athletes is because they’re so good at ignoring their pain threshold.

“But it happens to many kinds of athletes,” says Amato. “In my experience with UFC fighters, they’ll grapple for an hour and a half in the morning, then do two hours of weight training, then work on striking, which can definitely put them at risk. It’s people with a higher pain threshold are more likely to experience rhabdo by ignoring the body’s signs and symptoms.”

What Are the Symptoms of Rhabdo?

Rhabdo can happen all at once or in the days following a workout.

During a workout, symptoms include ashen skin, severe cramping, an extreme respiration rate that’s almost like hyperventilation — this is the body trying to get rid of excess carbon dioxide as your blood becomes more acidic. Surprisingly, another symptom is a low heart rate.

“It’s the reverse of what you’d expect,” says Amato. “If your heart rate is normally up higher at 170, and then at the same intensity your heart rate drops, that can be a sign.”

But sometimes signs of rhabdo may not show up until the days following a workout. Symptoms are things like extreme muscle pain (to the point of near immobility), nausea, lightheadedness, shortness of breath, and most clearly, dark, tea-colored urine. That’s a sign the kidneys are in trouble.

Unfortunately, not everyone shows all of these symptoms, so if you’re concerned about rhabdo, get a blood test. If you have it, you’ll have high levels of creatine phosphokinase (CPK) in the blood. More than 1,000 U/L is considered a red flag.

Intensity is good — tough workouts are how we reach the upper echelons of our sport. And there aren’t a lot of exercises with zero risk of injury or illness.

But completely ignoring your body’s pain threshold isn’t smart. Train hard, but don’t let your ego get the best of you. A powerlifter might try and hit a PR that’s 10 pounds over their last 1-rep max, but not 100 pounds over it. Try and train functional fitness workouts with the same mindset: push yourself just enough to get better, not enough to get worse.

And watch out for dark pee.