A Guide to Robi Points, the IWF’s New Replacement for Sinclair

When USA Weightlifting released their new selection procedures for the Tokyo Olympics, there was one line that received particular focus: as of June 2018, the International Weightlifting Federation compares individual results across weight categories with his or her Robi score.

Traditionally that was done with the Sinclair coefficient, designed in 1978 to rank athletes regardless of weight class and gender. Basically, the idea was to answer the question of “How much more weight could an athlete lift if he or she weighed more?”

Now the Sinclair is no more, at least in some official use; Olympic weightlifting is all about your Robi now. IWF.net claims that, “the ‘Robi Points’ is the official IWF calculation method to compare individual athlete Total results across each of the IWF bodyweight categories at Junior and Senior level.”

What Is the Sinclair?

So what’s the difference? It’s pretty hard to Explain Like You’re Five since these formulas contain some pretty advanced math but your Sinclair score is determined by multiplying your total with the Sinclair Coefficient, which is:

if x<b where x is the weightlifter’s bodyweight, b is the world record holder’s bodyweight (in the heaviest category) and A is the coefficient for this Olympic cycle, or 1.0 if x≥b.

You don’t really need to understand that if you want to know your score, you can just use the IWF’s calculator here.

What Is the Robi?

The Robi, on the other hand, was desvised by former IWF Technology Director and Olympic athlete Robert Nagy. The formula is: 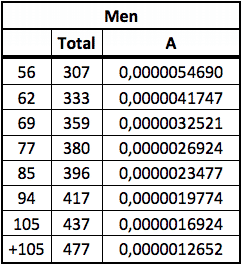 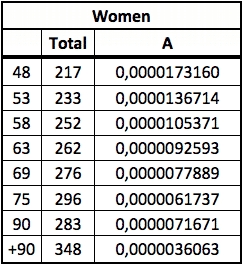 The IWF goes on to explain factors that define progressivity:

If you find that confusing, you’re not alone, but you can just use IWF’s new Robi calculator here to get your score. Spoiler: Your Robi is probably lower than your Sinclair.

The IWF has this handy table on their site comparing the two, and all of this information is coming from their excellent explainer available here.

BarBend spoke with Attila Adamfi, the Director General of the International Weightlifting Federation, to ask some of the most common questions we’ve heard.

BarBend: Thanks for taking the time to chat.

Attila Adamfi: I hope I will be able to answer.

Please note that the Robi points were mainly designed for a similar purpose to the Sinclair: to compare athletes’ results in different bodyweight categories at a smaller competition, not to compare athletes in the same category (that should be done by the Technical Competition Rules and Regulations) or to create a different “result” for a longer period.

Yes, in general it is linked to the actual world record.

If a world record is invalidated due to a drugs retest, will they adjust all the Robi scores for lifters in that category?

One criticism is that the Robi score only focuses on your weight category, not how much you weigh. So a super heavyweight weighing 105.1 kilograms gets the same score as one weighing 150 kilograms. Was this aspect discussed much before the IWF implemented the Robi score?

Yes, it is in line with the Technical Competition Rules and Regulations (TCRR), where the bodyweight is not a deciding factor anymore. For ranking in the same category, the TCRR shall be applied.

Will the IWF change the world records for the new weight classes?

Yes, new standards will be established corresponding to the new categories.

Not really, it was created for general use — the process started before the qualification system was created, when the bodyweight advantage was no longer a deciding factor.

I don’t think the Robi points is more difficult, anybody can calculate (just like the Sinclair) on our website.

Thanks for your time.