5 Benefits of the Romanian Deadlift

In an earlier article we discussed the origins, purpose, and execution of the Romanian deadlift, a powerful strengthening movement geared for nearly every strength, power, fitness, and sport athlete. In this article, we will detail the specific benefits Olympic Weightlifters, powerlifters, and general fitness goers can expect from performing the Romanian deadlift. 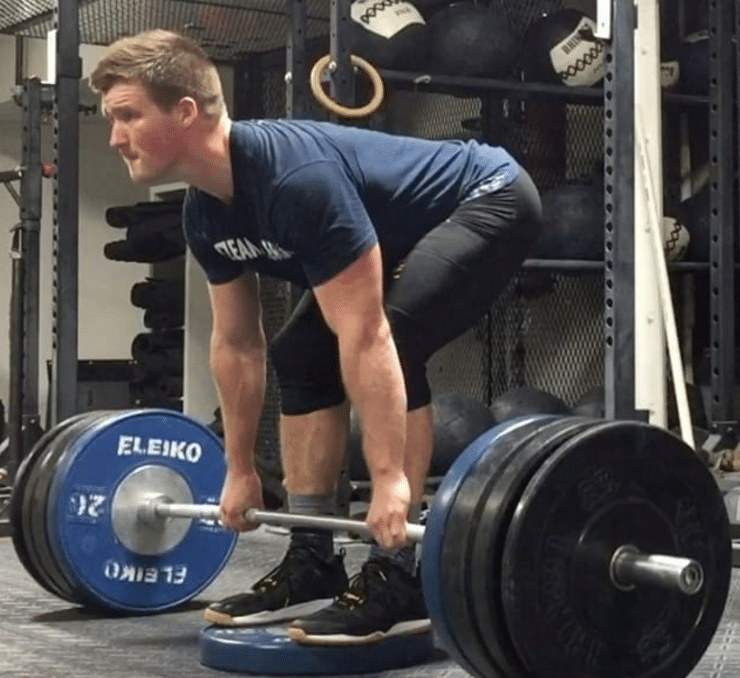 Here I am performing some Romanian deadlifts of a plate at 125kg for sets of 3-5 reps to increase pulling strength and positioning specific to the clean & jerk.

At the root of force development, power, and long term improvements in sports performance, muscular hypertrophy is a necessary component to overall development. In an earlier article I discussed thoroughly the importance of hypertrophy training for all athletes, specifically Olympic weightlifters and fitness athletes.

The Romanian deadlift has the potential to increase hamstring, glute, and lower back muscle mass, while minimizing potential injury due to often lighter loads being used (relative to the conventional deadlift). Due to the semi-locked knees and emphasis on hamstring, glute, and lower back engagement (rather than total body pulling capacity), athletes and coaches can better target necessary muscle groups with less volume and loading.

Deficit Romanian deadlifts to increase hamstring, glute, and lower back hypertrophy and get that full range of motion.

As discussed in greater detail in my previous article, the Romanian deadlift has high specific to the clean and jerk, clean pull, and even the snatch. The Romanian deadlift was actually named after a Romanian Olympic weightlifter, Nicu Vlad, who at the Olympics took gold in 1984, silver in 1988, and bronze in 1996. Nicu was often was seen performing heavy lifts such as this after training sessions. This movement increases positional strength of the lower back, hips, and hamstrings; while also reinforcing a nearly identical position needed during the first pull and transitions (between first and second pulls) of the clean (and snatch).

The Romanian deadlift can increase hamstring, lower back, and hips strength specific to the conventional deadlift. Many lifters fail to successfully lift 500lb + deadlifts due to lower back and/or hamstring strength (as opposed to the sumo deadlift), making this movement a great accessory lift to develop strong pulls.

Increasing hamstring and lower back strength and positioning with some heavy, controlled, Romanian deadlifts.

Many sport and fitness athletes perform deadlifts, cleans, and snatches, which the benefits are all discussed above. Furthermore, most sport athletes rely on powerful hips extension and posterior chain performance for acts like running, sprinting, and jumping. The Romanian deadlift can increase all of the muscles involved in such movements, enhance movement patterning, and even help resist injury caused by lower back stress and/or dysfunctional loading (by increasing glute, hamstring, and lower back strength and coordination).

Lack of lumbar control, hamstring and glute strength, and proper hinging patterning at the hip joint during deadlifts, cleans, and other front loaded movements can result in excessive lumbar spine movement/instability. If the athlete cannot perform such movements while maintaining a rigid spine, the Romanian deadlift may be a good option to teach proper hip function, build positional awareness and strength, and increase muscular hypertrophy. Too often athletes lack movement awareness, mobility in the hips, flexibility, and a general sense of strength and muscle mass needed to progress with loading safely. Inadequacies in posterior chain strength and mechanics can most certainly increase the risk of lumbar stress, strain, and injury.

While Romanian deadlifts may not be the universal solution to deadlifting woes and spinal injuries, they sure as heck can help teach proper movement and spinal stability when performed correctly.

The Romanian deadlift is a highly beneficial movement for nearly every athlete, regardless of sport or training purpose. As with all programming, coaches and athletes must determine when, why, and how to implement each movement within a training program to best suit the needs and goals of the athlete. Furthermore, coaches and athletes must recognize the additional losing stress that Romanian deadlifts can have within a training program and should plan according.

Ryan Summers, PT, CSCS, Owner and Founder of Advanced Movement, Performance, and Strength, had this to add about the Romanian deadlift:

“There’s nothing that beats the deadlift for building functional strength and generating carryover to our daily lives. There’s a short learning curve and different variations, making it a safe and efficient exercise for nearly everyone. In my opinion, we were built to lift external loads, but not necessarily squat them. However, I do think most people need to learn a fundamental hip hinge pattern, to ensure they’re not necessarily “squatting” a deadlift. And while deadlifts are great, very rarely do I recommend deficit deadlifts, as I think the risk of injury far outweighs the reward for this type of variation.”