3 Reasons Why No Two Squat Stances Look Exactly the Same

We are all built differently, and no two squat stances are alike.

To be great at squatting, you need multiple factors to be aligned. Outside of understanding the movement’s mechanics, you also need baseline levels of strength, coordination, mobility, and proprioception. Within each of these categories, exists small subcategories like anthropometrics, squat style, and so forth. In this article, we’re going to analyze squat stance, and why it varies so much among athletes.

When it comes to assessing squat stance, the question can be approached in many ways. The best way to find your stance is to work with a coach and go through multiple periods of trial and error. However, if you’re interested in the why behind squat stance differences, then read on.

So why are squat stances different?

For this article, we’ll breakdown differences between squat stances in three sections including anatomical structure, back squat styles, and mobility.

The Hip Bone Connects to the…

Arguably the number one reason why your squat stance is different from everyone else around you is based solely on how your body is built. Everyone will have some variance in their squat and stance based on their bone alignment and hip anatomy. A couple of the major players in regards to differences in squat stances and hip structure include,

To take it a level further, ligaments, synovial fluid, and cartilage can also play a small role with femur and acetabulum anatomy and how you move on a daily basis. The hip joint is a ball and socket joint where the femur’s head (ball) connects to the antebellum (socket).

Details like the depth of the acetabulum, size of the femural head, and angle of the femur’s neck can all manipulate what feels most natural when squatting.

Why Does This Matter?

If one can understand their basic hip structure, then they can train with a squat stance that accommodates their body best. The old saying, “trying to fit a squat peg into a round hole”, fits pretty well when you think about forcing the body into an ideal squat stance.

For a visual, stand up and adjust your squat stance more wide or narrow than what you normally use now and achieve depth, what do you feel? More than likely it feels uncomfortable and awkward. Note, it could just be the fact that you’re not used to it, but often times, this discomfort is more reflective of hip structure and what we feel as most natural when squatting.

There are multiple tests you can use to assess your hip structure and what stance will potentially work best for your body. Check out the video below that offers some useful visuals and tests to assess hip anatomy and structure.

A caveat that can come with this anatomy section worth addressing is the idea of feeding into dysfunction. This is the idea of squatting with a stance that is supporting an imbalance. For example, if you’re moving in a way to simply accommodate for the goal of pushing through uncomfortable squats, or focusing on a stance width that feels unnatural, then there could be issues down the road.

However, the best way to assess and understand this is to work with a coach, remain objective about imbalances, and to undergo multiple periods of trial and error.

Main Takeaway: No two hips are built alike. Spend some time trying to understand how your body is built, and understand that no one needs to squat with one type of stance in a certain way.

The second reason behind why back squat stances, specifically, vary from athlete-to-athlete can be assessed based on one’s preferred squat style. For example, powerlifters that primarily squat low-bar will typically have different squat stances compared to weightlifters who primarily do high-bar squats and front squats.

Author’s Note: The below information is based on general observations and will be variable upon different individuals, as there is no one-size-fits-all answer with squat styles and stance differences.

Generally, there are two reasons why squat stance can differ between these back squat styles and it will come down to an athlete’s goals and the mechanics needed for the squat itself.

Generally speaking, the low-bar squat will require a slight deviation in mechanics compared to a high-bar squat when moving weight, as the back is serving more as a prime mover and there tends to be more of forward lean. For many athletes, to be successful at this squat style, their stance must be widened slightly. Also, you’ll generally see the toes turned out a bit more, as many find this position a bit more accommodating for the hips (hips in external location).

One explanation for the low-bar squat stance difference could be the fact that a powerlifter’s main goal is to move the most weight possible. To move the most weight possible, athletes will usually manipulate their individual ranges of motion and joint angles to accommodate for this goal. Some examples in research highlighting how mechanics and joints angles can shift based on squat style and stance can be seen below.

A few studies have analyzed differences in joint angles and squat stance. One study from 2018 published in the International Journal of Exercise Science noted that a wider stance tended to reduce range of motion of ankle dorsiflexion (1). While this study didn’t suggest this as being beneficial for moving maximal loads, it could be one reason why powerlifters lean towards this squat stance and style.

Another study from 2001 published in the Medicine and Science In Sports and Exercise Journal highlighted that powerlifters who used wider stance squats tended to have higher knee and hip moments compared to narrower stance squats (2). These observations make sense when you consider the posterior chain loading implications of the standard low-bar squat and how mechanics can shift in the hips and knees when widening the stance in this squat style (increased hip flexion).

Again though, this is not attempting to say that all low-bar stances are the same, or one width is better than the other, but to simply highlight how mechanics can shift with differences in squat style and stances.

Moving on to high-bar squats. The high-bar squat utilizes a more upright posture, which will typically result in slightly more dependance on the quads, as the back is playing more of stabilizer role — compared to prime mover. Generally speaking, high-bar squat stances will be more narrow to accommodate for the increase in quad usage, stretch reflex, and upright posture.

A 2019 study published in the Scandinavian Journal of Medicine & Science In Sports highlighted that narrow stance squats had significantly greater levels of knee flexion (3). From an application point of view, athletes who front squat and high-bar squat more frequently will often lean towards a more narrow squat stance, and this is often due to the similarities of these squats’ mechanics and the Olympic lifts and athletic tasks (jumping, landing, etc.).

The biggest takeaway from this section is to not assume one squat style as being more optimal with a certain stance. The main takeaway is the concept that different squat styles can result in varied stances. Differences are often results of an athlete’s comfort in the squat style, overall goals, and specificity needs of training.

Main Takeaway: Squat styles can play a role in one’s preferred and most comfortable squat stance. However, that is variable from athlete-to-athlete!

How Much Is Enough?

Outside of anatomical differences and squat styles, mobility can also play a role in why squat stances are different. Of all the sections discussed, mobility is possibly the most variable between athletes and their stances. For starters, there isn’t really a perfect level of mobility every that athlete should have. However, there are baseline levels required for certain activities to ensure success in certain movements, sports, and general life. 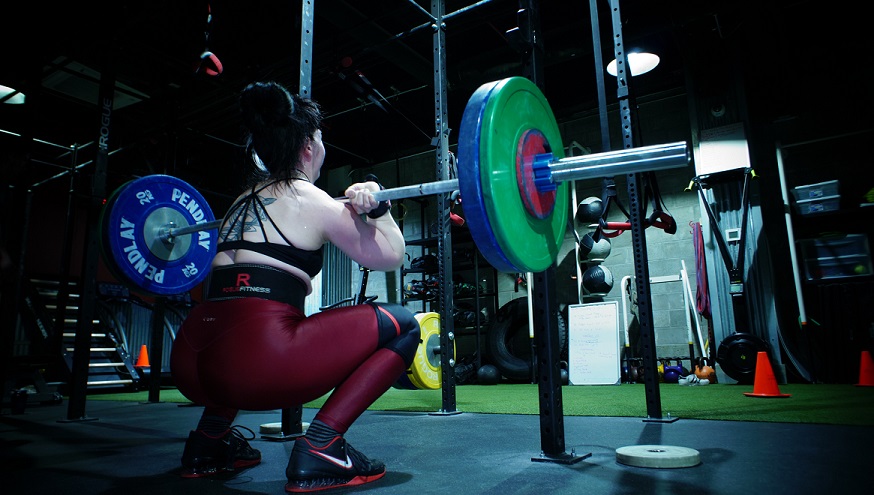 In a perfect world, the mobility needed for one’s most comfortable squat stance will relate to both anatomy and preferred squat style. If one can understand these two variables, then knowing how much mobility is needed in each joint can help ease the process of understanding squat stance.

In regards to squat stance and mobility there are multiple areas on the lower body that can be assessed including,

If an athlete is limited in any of these joints, or they are very mobile for that matter, then typically their squat stance and form will reflect that. This is another reason so many squat stances vary from athlete-to-athlete.

Main Takeaway: Mobility can play a role in one’s preferred squat stance based on multiple ranges of motion at various joints.

The main idea behind this article is not to be descriptive in nature, but to highlight how many different factors can influence an athlete’s squat stance. There are superficial and in-depth factors all at play, and no athlete should attempt to make their squat stance cookie cutter based on someone else’s form.

If you feel uncomfortable in your squat because you’re forcing a stance, then hire a coach and experiment with other variations. The idea that one type of squat stance is best is limiting in nature and not optimal for both performance (usually) and comfort.

1. ERIC DEMERS, R. (2018). The Effect of Stance Width and Anthropometrics on Joint Range of Motion in the Lower Extremities during a Back Squat. International Journal Of Exercise Science, 11(1), 764. Retrieved from https://www.ncbi.nlm.nih.gov/pmc/articles/PMC6033510/