Dropping Weight in Strongman: How to Cut Pounds and Build Strength

Strongman. The word alone conjures the image of man: tall, muscular, and larger than life. The character that the World’s Strongest Man contest has created is most likely the only one people think exists, but we know there is much more to it then that. With the advent of the organized sport 20 years ago came weight and gender classes, providing a place for people to compete no matter their size. In previous articles I’ve made a big deal out of people being in the right weight class if they are looking to win. This is because I was in the wrong class, and it is a mistake that can be prevented.

Like most, the first thing I thought when I started training for strongman was that I need to put on mass. I was 230 lbs and just set a goal of 300 because of the athlete’s weights I saw on TV. I trained hard, ate big and put on some serious weight, relatively quickly. Six months in, I was 275 lbs with 18% bodyfat. My strength was up enough where I felt confident to do my first contest and that’s where I really fell in love. Steve MacDonald ran a contest in Pittsburgh, and I came in dead last. I was big, not as big as Steve though, so I set my sights on gaining more weight. I kept competing, started winning and pushed the scale to 285 lbs.

Unfortunately, it seemed like all I did was eat. There was absolutely no chance of eating 7,000 calories a day without throwing in a significant amount of cheap, calorie dense foods (also known as fast food or junk food). Bowls of ice cream, one dollar hamburgers and Chinese buffets were part of my daily food consumption program. I was training twice per day at high intensity, burning up a significant portion of the food I ate. This made the calorie balance game a constant struggle.

After two years of eating, training, and competing, I took a serious look at my situation. I was in my mid thirties and I am six feet tall.  I was tired all the time. My blood pressure was 145/95. I was having a hard time sleeping due to difficulty breathing at night. At the international level the guys dominating were all six two or taller. While the occasional competitor is under six feet it definitely isn’t the norm because at a certain point you need to realize absolute strength will be relative to size and more importantly, the ability to generate force. 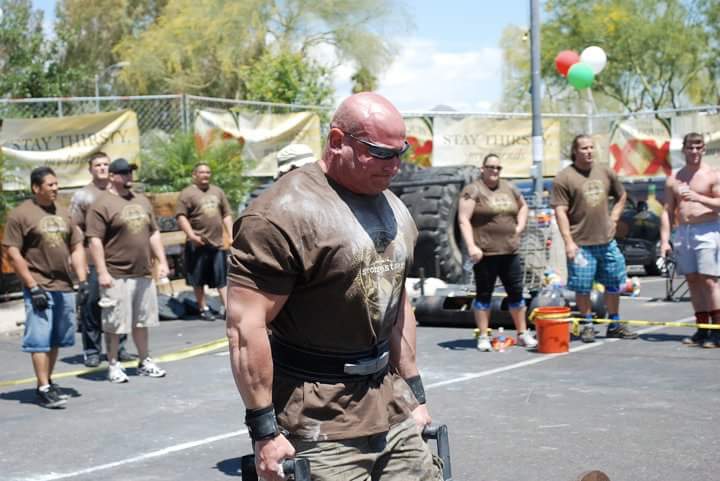 To get something to move you must generate force. The math comes down to mass multiplied by acceleration F=MxA. If two athletes were to push a car and the only thing different between them was body weight, the heavier athlete will move the car faster than the lighter one. My body was struggling to keep its weight at 285. Breaking 300 would be necessary to advance, but what would the cost be?

After a few weeks of weighing the options, I decided I could one of two things: Maintain my weight and compete with the biggest guys on the planet, or cut weight and try going against the guys in the 231 class. Middleweight was less glamorous but has its own unique set of challenges. Pro middleweights use nearly the same weights as the open class and the athletes are much better conditioned. At the time there were no consistent International contests for the class, but there were a handful of opportunities to compete and it would satisfy my love of game day.

I cut my calories in half, and eating became enjoyable again. I had an immediate dip in my strength until my weight stabilized at 255 pounds. To my surprise, after about a month at that weight, my numbers shot back up to my previous personal bests when I weighed 300 pounds more! My health got better and I was sleeping through the night again. After six months at 255, I began to surpass my previous lifetime best numbers on all my lifts and went on to win my Pro card.

Having a 105 kg pro card is a unique situation. While you must make weight to compete professionally, you may still compete in the open as an amateur. For me this was a great opportunity to keep my weight in check, and compete against the bigger guys. Since I wasn’t going to win any big prize money in either situation, this seemed much more reasonable to me. I competed for five more years and hit my very best lifts at 40 years old walking around at 250 lbs, a weight I still maintain today.

If you are considering coming down a class consider the following points:

How to Make the Drop and Maintain Strength

Getting to weight is most likely going to be easier than you originally thought. For many it will simply be a matter of getting used to eating less. When consuming massive amounts of calories your stomach will expand to accommodate more food. When it empties it brings on serious hunger and a desire to fill up the newly enlarged gut room. Over a period of four to six weeks, begin subtracting 500 calories a day from your diet. This, spread out over the course of the day should be barely noticeable. I hit maintenance weight after 6 weeks and settled in at 4,000 calories per week. It was as simple as cutting back on all junk food and just leaving my planned food as is.

Believe it or not, I’ve run most of my life. From summer track as a child, to high school track and cross country, to a handful of triathlons as an adult. Running distance was impossible as it would have crushed my knees and back at that weight. I added in two, thirty minute steady state cardio sessions a week on the elliptical until I felt good enough to run again. I literally felt my health improving after just a week.

I was then able to do 10 to 15 minutes of intervals almost every day. Some sled drags and pushes were added when I was feeling good and not too beat up, and on days I was hurting the Airdyne does the trick nicely. It significantly cut the amount of rest I needed between sets, and gave me capacity for more reps of timed sets of deadlifts and presses.

A temporary dip in my maximum lifts was expected and ultimately happened. An acclimation period was necessary to make up for the lack of mass. What I (and you) must do to make up for the drop in M (mass) is to develop more power to create more A (acceleration). This will fix your currently reduced ability to generate F (force). This is where dynamic training plays a big role. Weightlifting (commonly referred to as olympic lifting) and explosive squats and deadlifts get you used to moving quickly and under control. When you master them, you will see your PR’s begin to return to previous levels.

After six months my bodyfat had settled in at 10% with most of my weight loss coming from fat. My blood pressure was a healthy 125/75 and I was sleeping easier. Walking around became easier and I was actually in a better mood all the time. I made my first cut to 231 with ease and won my pro card at my first 105kg contest. I went on to have continued success in the class and still take a few heavyweight amatuer contests away from the big guys. I was one of the best moves I have ever made as an athlete. Today at 45 years old I still maintain about 245 lbs. I don’t train for strength but am under 10% bodyfat and have great blood work and blood pressure levels.

Now There Are More Opportunities than Ever

With the growth of the sport there are many more opportunities for lighter athletes to compete at the top level for prize money. The World’s Strongest Man super series was just announced and gives nearly all athletes the chance to compete on the international level. Guys like Jeff Lee and Rob Kearney easily compete with the bigger guys (both 105kg professionals) and the women now have pro opportunities at the Arnold! This year’s winner, Leifa Ingalls, is well under heavyweight and still dominated the contest.

If you are curious to try, this primer should get you on the road. With my experience and track record, I help athletes on an individual basis with this process all the time. If you want more detailed information on making the switch, send a message to me on IG @prostrongman.