Study: Which Rep Range Is Best for Strength and Hypertrophy?

Which bench press training protocol produced the most strength and hypertrophy gains?

An interesting new study published in the Journal of Strength and Conditioning Research has provided some insights into efficiently programming different training volumes and intensities.

This study was interesting because it furthers our knowledge as to how to program various sets, reps, and intensities to facilitate particular adaptations when volume is equated. Other recent research has pointed out how fundamental it is to assess total training volume when achieving adaptations like strength and hypertrophy, so it was awesome seeing another piece of literature broaden the programming scope.

For this research, 42 healthy men were split into four groups that followed different protocols for sets and reps, though everyone had the same number of workouts. The different training groups were as follows:

To accurately gauge each group’s starting intensities for their sets, researchers had subjects perform 1-RM tests prior to starting the exercise intervention. In addition, each subject had their pectoralis major measured to assess starting muscle volume.

For 10 weeks, the three training groups follow bench press training protocol twice a week. Total training volume was calculated by taking load x reps x sets and once subjects were able to complete their prescribed sets at the desired intensity, then weight was increased by 2.5kg. Every group rested 3 minutes in-between each set.

The authors hypothesize that the greater increase in relative 1-RM strength in the 4-RM and 8-RM groups was due to the increase in muscle hypertrophy in addition to neuromuscular adaptations brought on by the greater demands that the musculoskeletal system underwent compared to the 12-RM group that used lighter loads. 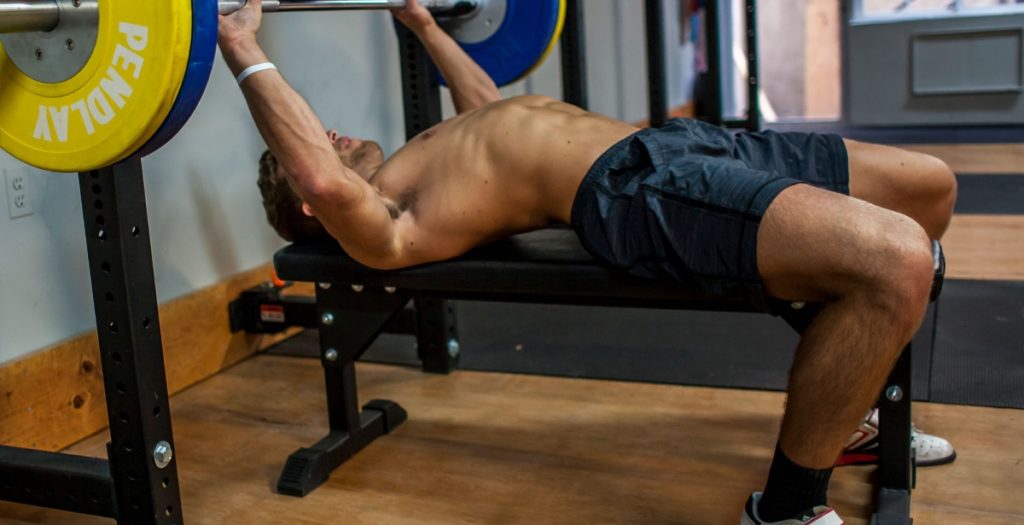 While these results were interesting there are a couple considerations that coaches and athletes should take into account for this study. For starters, authors never provided a training age for their subjects, which could skew these results slightly. Were they beginners, intermediates, or advanced lifters? All of these populations would have vastly different loads on the bar for the prescribed reps.

Additionally, researchers didn’t provide a ton of detail about the scope of exercise and lifestyles outside of the 10-week exercise intervention. For example, what else were the subjects doing in their free time and could it have manipulated results? After all, researchers only measured pec volume, if the subjects were training their deltoids and triceps regularly (bench press primary movers), too, then it would be interesting to test their volume and increase as well.

If we compared this study to conventional training wisdom, then it falls pretty well in-line with what’s already used to accommodate for strength and hypertrophy. However, this study highlights a few interesting points that could be taken into account when programming.

This study was interesting because it suggested that an improvement of hypertrophy in addition to potential neuromuscular increases were superior to only focusing on hypertrophy.

When it comes to programming, it appears that conventional wisdom about training loads and volume s and how they influence hypertrophy and strength are on the right track.