With more and more people ditching vitamins for greens powders, I decided to test out Ormus Super Greens, the “probiotic greens superfood.” The product is manufactured by Sunwarrior, a Utah-based health food company that specializes in organic vegan supplements (you probably know them best for their brown rice protein powder that adorns the shelves of most supplement stores). Ormus Super Greens comes in both “natural” and “peppermint” flavors; I reviewed the natural flavor below.

Cheaper than a lot of greens powders on the market, Ormus Super Greens doesn’t contain dozens and dozens of ingredients like some of its competitors. It keeps things relatively simple with three kinds powdered grass — wheat grass, oat grass, and barley grass — and powdered alfalfa and moringa oleifera leaf. The product is roughly half powdered versions of these ingredients and half a dehydrated juice blend of the grasses and the alfalfa. (Sunwarrior claims that juice powders are “several time more potent than whole powders.”)

It also contains a little ginger root and seven strains of probiotic bacteria, amounting to more than 2 billion per serving. 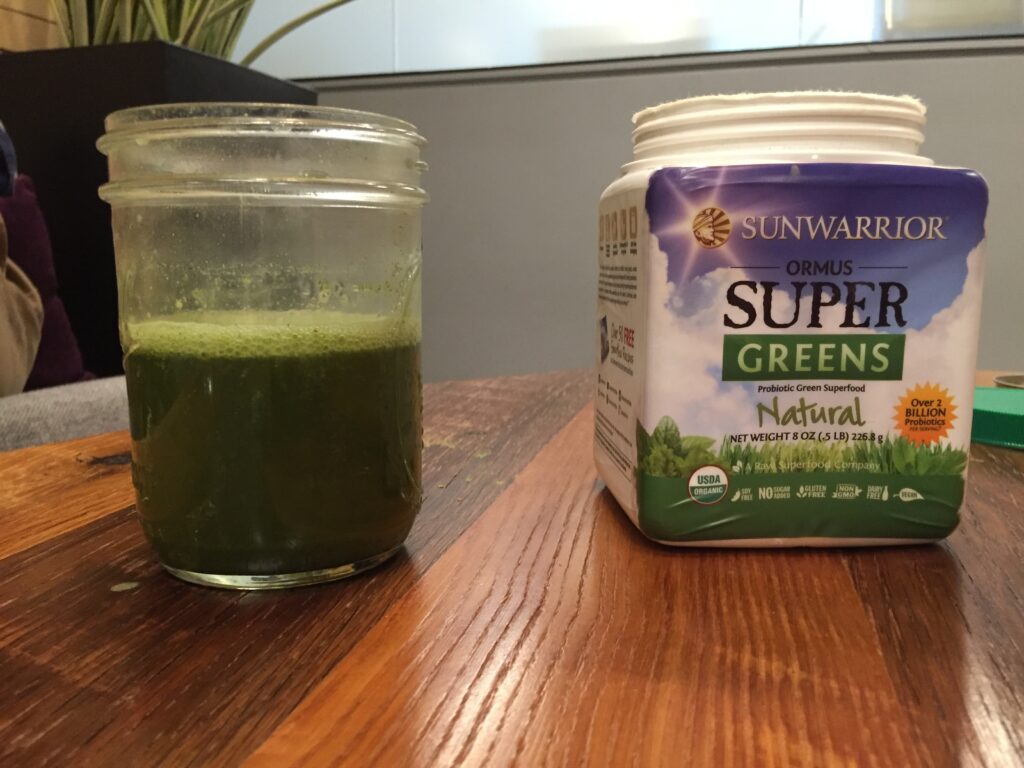 Given the serving size, the principle benefit of the supplement (and those that are advertised the most prominently on the package) is digestive health. That’s largely attributable to the probiotics; 2 billion per serving is a significant dose, since most dedicated probiotic supplements average between one and ten billion spread out over multiple doses.

Probiotics may help to improve the quality of your gut microbiome, which refers to the enormous family of bacteria in your stomach and digestive tract. Research has been showing that these critters influence not only how well you absorb nutrients from food and the ease of your bowel movements, but also inflammation, insulin sensitivity, and your likelihood of gaining fat. There’s even some evidence that a healthy gut can lower your risk of anxiety and depression, though that research is still pretty young.

The green ingredients are decent sources of fiber, vitamin C, some B vitamins, iron, zinc, selenium, and in particular vitamin A. But that’s when they come in their whole, unpowdered form and you consume a solid serving of them. In a powdery five gram serving of the stuff, this supplement contains just 11% of your recommended daily intake of vitamin C, 17% of your Vitamin A, 7% of your calcium, 6% of your iron, and 5% of your potassium. But although the packaging doesn’t emphasize this, the powder does deliver a potent dose of antioxidants, which means it reduces oxidative stress and may help to slow some of the effects of aging, which includes diseases like cancer and heart disease.

(It’s worth noting that studies on supplemental antioxidants have seen mixed results compared to consuming them in whole food form. Where greens powders lie on the ‘whole food to supplement’ spectrum is a little unclear at this point.)

One scoop contains 17 calories, 3 grams of carbs, 2 grams of fiber, 1 gram of protein, and no fat. 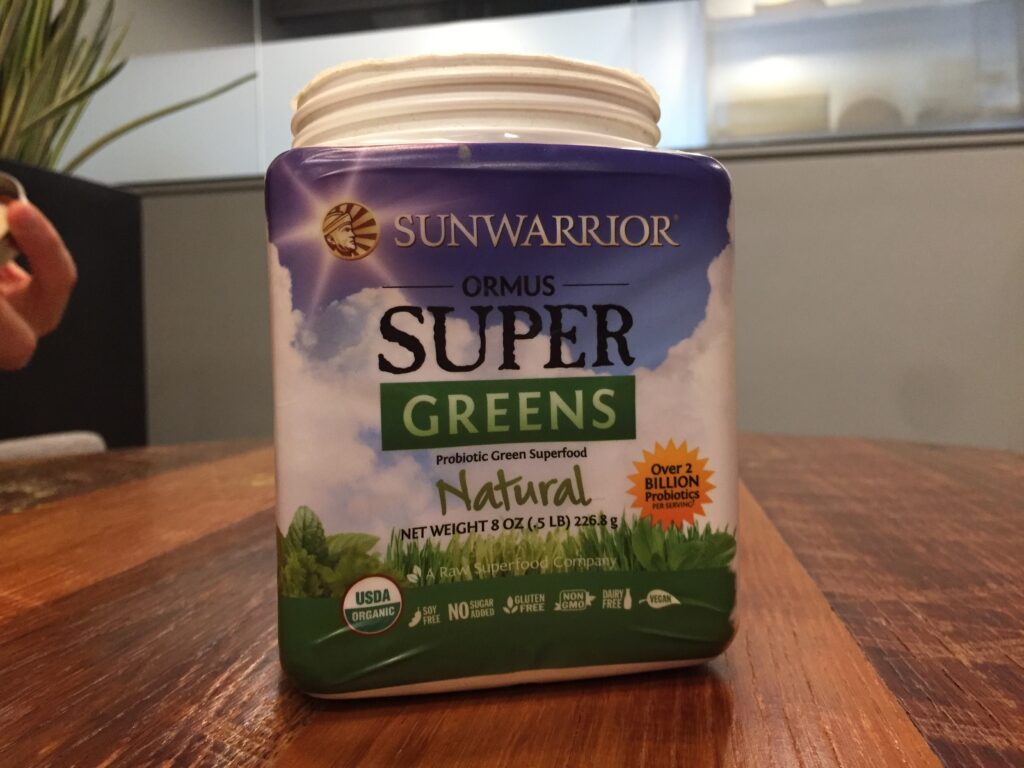 I only tried the “natural” flavor, and I won’t lie, it tasted like dirt. That’s to be expected with greens powders, particularly given a product that’s as barebones and inexpensive as Ormus Super Greens. The mint flavor is likely better, but given the ingredient list’s commitment to making most of the product out of grass, it’s unwise to expect anything delicious. But that’s not unusual for what the product is; you wouldn’t buy a banana and expect it to not taste like a banana. Plus, Sunwarrior provides over fifty ways to incorporate it into your smoothies to avoid being overpowered by the taste.

As I said above, a scoop of the greens used in the product isn’t as nutritious as a cup of them in their whole state. As far as vitamins and minerals go, the product’s biggest selling point is the 11 percent of your RDI of Vitamin C and the 7 percent of your calcium. 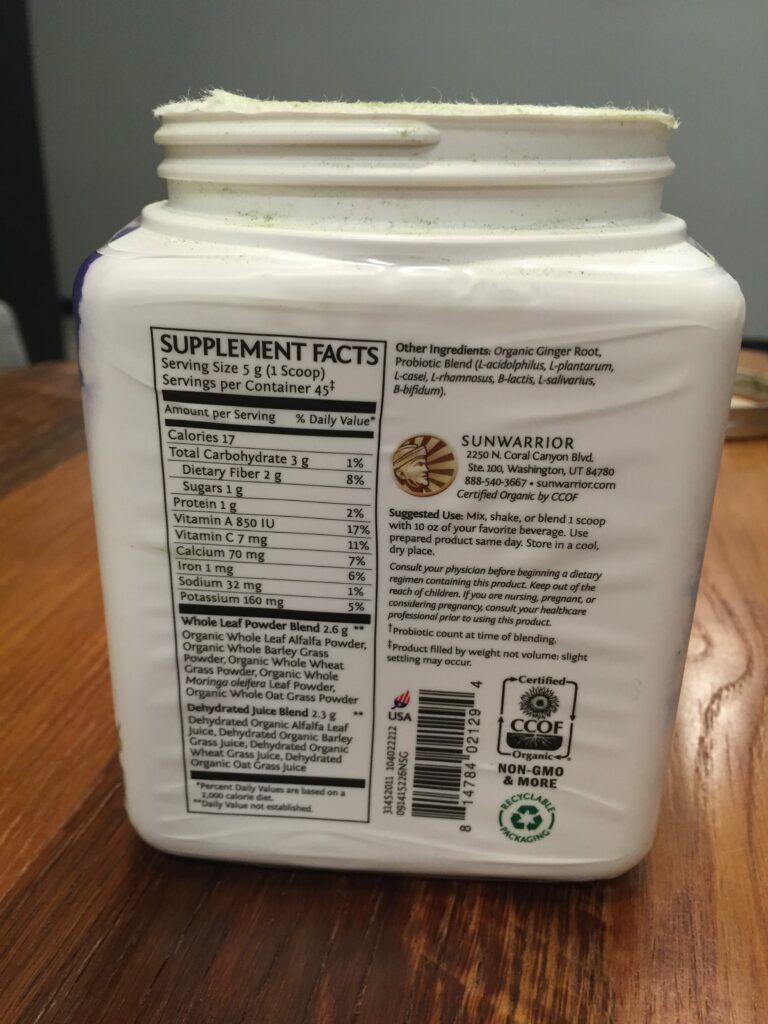 But to Sunwarrior’s credit (and unlike many of their competitors) the tub doesn’t make outlandish claims that the powder can supplement or replace vegetables in your diet, and it even avoids the dreadful term “detox.”

The product is labeled as a probiotic and it delivers a hefty dose of them. Its main benefit is digestive health, which is well supported by scientific evidence. It would be unfair to judge the ingredients as a multivitamin—I’m reviewing this as a probiotic, and as a probiotic, it’s pretty effective.

At fifty dollars for ninety servings ($0.55 per serve), it’s one of the cheaper greens powders on the market. Compare that with $127 for thirty servings of Athletic Greens ($4.23/serving), $35 for fifteen servings of Onnit’s Earth Grown Nutrients ($2.30/serving), $30 for 30 serves of Pharma Freak’s Greens Freak ($1/serving) and $52 for a hundred serves Amazing Grass’s Green Superfood ($0.52/serve).

Sunwarrior’s Ormus Super Greens is a much more simple product than a lot of greens powders, but it doesn’t try to be anything it’s not, nor does it claim to replace all of your other supplements. As a multivitamin or as a mineral supplement, you’ll want to look elsewhere. But as a probiotic supplement and a source of antioxidants, Ormus Super Greens is cheap and potentially effective for what it promises and what it delivers. 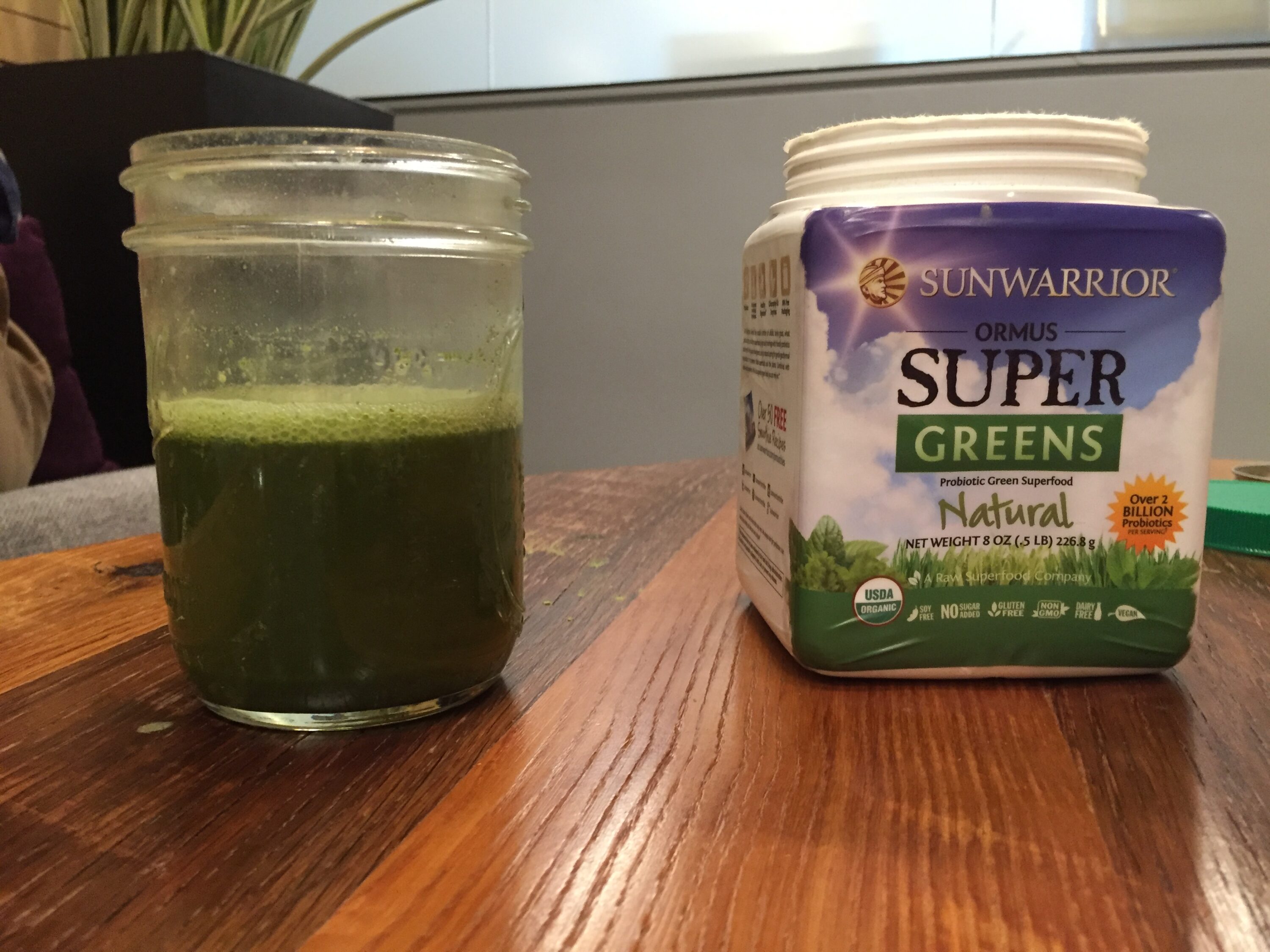